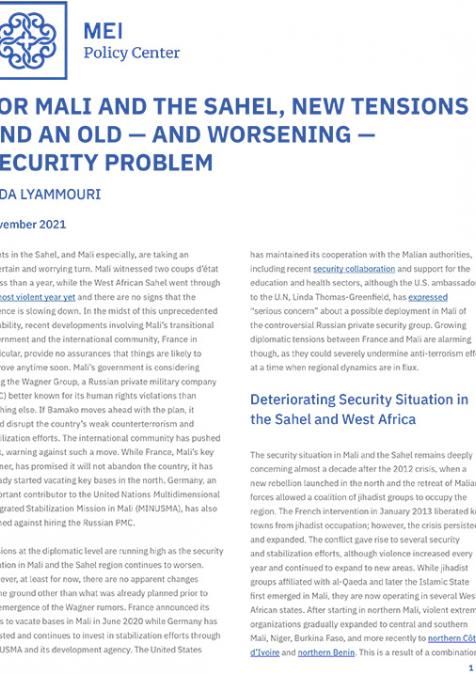 Share
Download
For Mali and the Sahel, New Tensions and an Old — and Worsening — Security Problem
Authors
Rida Lyammouri

Events in the Sahel, and Mali especially, are taking an uncertain and worrying turn. Mali witnessed two coups d’état in less than a year, while the West African Sahel went through its most violent year yet and there are no signs that the violence is slowing down. In the midst of this unprecedented instability, recent developments involving Mali’s transitional government and the international community, France in particular, provide no assurances that things are likely to improve anytime soon. Mali’s government is considering hiring the Wagner Group, a Russian private military company (PMC) better known for its human rights violations than anything else. If Bamako moves ahead with the plan, it could disrupt the country’s weak counterterrorism and stabilization efforts. The international community has pushed back, warning against such a move. While France, Mali’s key partner, has promised it will not abandon the country, it has already started vacating key bases in the north. Germany, an important contributor to the United Nations Multidimensional Integrated Stabilization Mission in Mali (MINUSMA), has also warned against hiring the Russian PMC.