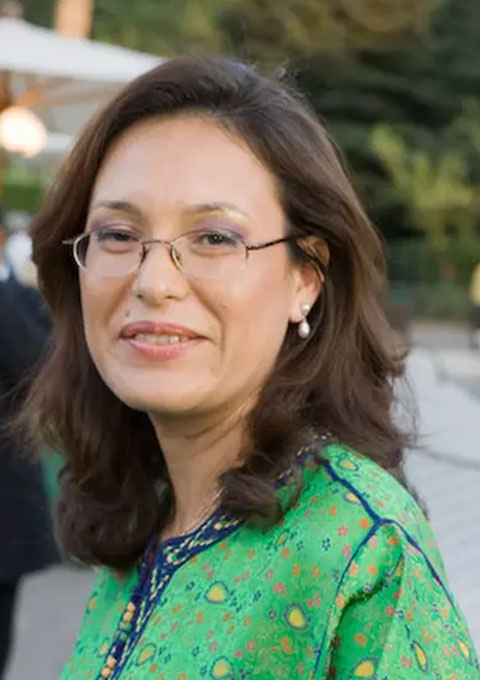 Mrs. Nezha Alaoui M’Hammdi is Senior Fellow at Policy Center for the New South (since 2020) and the current Ambassador of His Majesty the King of Morocco to Ethiopia and Djibouti since 2016. She has served as first Permanent Representative of the Kingdom of Morocco after its return to the African Union by 2017, and to the Peace and Security Council of the AU (April 2018). She is currently Dean of the Council of Arab League Ambassadors to Ethiopia

After joining the Moroccan Ministry of Foreign Affairs of Morocco in 1989, Mrs. Nezha Alaoui M’Hammdi served mainly in Italy and Ghana.

During her assignment, from 2005 to 2009, to the headquarters of the Ministry of Foreign Affairs, in Rabat, she was first handling the relations with the European Union Commission, the European Union, mainly the European parliament and the Council of Europe. She was also meanwhile member of the commission which drafted the Advanced Statute negotiated between Morocco and the EU.

From to 2009 to 2013, Mrs. Alaoui M’Hammdi was appointed as a Deputy-Director in charge of African Affairs at the Moroccan Foreign Ministry.

Mrs. Nezha Alaoui M’hammdi Holds a PhD in International Relations. After graduating from high school, she joined the National School of Public Administration (ENAP), where she obtained her degree in 1989.

She is also a researcher, especially on African Affairs. She was collaborating on several matters with the French Institute of International Relations (IFRI) and with the European Institute of Mediterranean (IEMed). Within “Cesem”, a research group affiliated to the HEM School of Management in Rabat, she was the co-chair of the Morocco-Africa Chair.

She is currently following a Master Degree in Managing Peace and Security in Africa, IPSS, University of Addis Ababa (2019-2020).

She is also the author of several academic works on the research program “Atlantic Future” with Barcelona Centre for International Affairs (CIDOB), which aims to strengthen relations of Morocco and the African continent into the Atlantic area (2015).

Mrs Alaoui M’Hammdi participated in the executive training seminar at the Near East South Asia Center for Strategic Studies (US Department of Defense) in 2007, and in the regional program of the United Nations Institute for Training and Research (UNITAR) on conflict prevention and peace building in Africa in 2009.