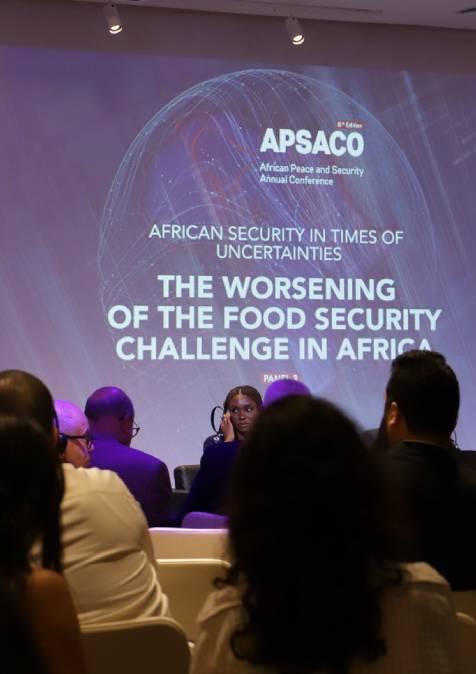 The timing was perfect for analyzing the “African Security in times of uncertainties”. The Rabat-based “Policy Center For The New South” programmed its  6th “African Peace d Security Annual Conference” (APSACO) on July 20/21 to focus on the historic challenge of our time-the world,  Africa in particular, struggling to find stability while war s waged in Central Europe, and 25 million tons of wheat and fertilizers needed to feed the starving population, millions on the African continent, blocked by Russia in Ukrainian harb s and silos. An estimated 16.7 million people in Ethiopia, Somalia, and Kenya are in a severe drought, with no end or food. A dozen or so Civil Wars in Africa are driving citizens into despair,  perhaps displaced forever, impoverished, and tortured by terrorist movements; in the Central African Republic, an estimated 120 armed groups alone are tempted to steal diamonds, diamonds forever, paying terrorist wars in the region, corrupting power .” Unfortunately several African conflicts and civil wars have been caused and funded by the diamond industry”, wrote the “National  Geographic Society”(may, 19, 2022). Just a few years ago, before the savage destruction of human life by the Covid 19 pandemic, Africa’s growth was performing as vibrant and dynamic as ever before; the continent, for decades, centuries, facing misery, was beginning to compete with other powers of the world, yes, no exaggeration,  despite the poverty of millions, deadly diseases like Ebola, HIV/Aids, tuberculosis, and hundreds of million malaria cases yearly. Who was crowned as the best economic performer in the world? GHANA. The virus slowed progress and hope to a halt. The “African Economic outlook 2022”, published by the “African Development Bank Group” ( May 25, 2022), stated “ Africa’s 2021 economic rebound impacted by a persisting  Covid 19 pandemic and Russian -Ukrainian war. Africa’s gross domestic product grew by an estimated 6.9 % in 2021. This is after the continent suffered a pandemic-induced contraction of 1.6 % in 2020. “Rising oil prices and global demand,” noted the study, “have generally helped improve Africa’s macroeconomic fundamentals .”

But growth could decelerate to 4;1 % in 2022 and remain stuck in 2023.” Former Nigerian government minister Akinwumi Adesina, President of the  “African Development  Bank Group”,  predicted that the African recovery will be costly:” Africa will need  at least 432 billion to address the effects of Covid-19 on its economies and the lives of its people-resources it does not have.” The “African Economic Outlook “clarifies that the pandemic and the Russia -Ukraine war could leave “a lasting impression over several years, if not as much as a decade.” Around 30 million people in Africa were pushed into extreme poverty in 2021, and about 22  million jobs were lost in the same year because of the pandemic. The trend is expected to continue through the second half of 2022 and into 2023. The economic disruptions stemming from the Russian-Ukraine war could further push 1.8 million people across the African continent into extreme poverty in 2022. That number could swell with another 2.1 million in 2023. The “African Economic Outlook “shocks with alarming figures:” The continent’s additional financing needs for 2020-22 are estimated at 432 billion $. Financing African countries nationally determined contributions-public pledges from countries on how they plan to pay a part in post -2020 collective action on climate change- will require up to 1.6 trillion $ between 2022-2030, figures certainly debated and deciphered at the United Nations Climate Conference, COP 27, which Egypt will host in November.

In its introduction to the APSACO conference, the “Policy Center For The New South” suggested consequences for the global cacophony, which is shadowed by Chinese-United States geopolitical and economic tension, climate change, and recession: “Food security in Africa is jeopardized. The capacity to securely access sufficient food is severely impacted by the sequence of conflicts, natural disasters, and epidemics. Climate change increases conflict risk in several areas by exacerbating existing social, economic, and environmental factors”.

The think tank stated in its thoughtful introduction: “The institutional weakness and instability of several States are major obstacles in the fight against violence and poverty. In its economic and environmental dimensions, overcoming this vulnerability is a vital priority for Africa. ” Herculean strength is needed, it seems, to reestablish Africa’s s economic performance and recovery, cruelly interrupted by a possibly long-lasting European war, a virus imported from China, and global climate change, ready to sink island states and force polar bears to search for refrigerators. ”The African continent, which over the past two decades pursued a process of diversification of economic, political, and military partnerships at  State and institutional levels…stands to be affected to varying degrees.Indeed, global  economic conditions and Africa’s  structural challenges exacerbate  underlying trends  with irreversible  geopolitical consequences.”(Policy Center For the New South, July 20, 2022) The 160 participants of the “African Peace and Security Annual Conference” , citizens of 30 nations, were challenged with vital questions such as “ the worsening of the food security challenge in Africa” , or “Fragile African States in times of uncertainties”, the conference turning into a laboratory of ideas, members of various panels advancing new thoughts and discoveries: Eniola Mafe, a multi-talented strategist from Nigeria, revealed how high tech is attempting to help desperate farmers with drones, ready to analyze the soil of unexplored land. Michael David Terungwa, chosen by the “Policy Center for The New South” as a “young African emerging leader”, discussed on the Policy Center- podcast his fight to save displaced Africans, many surviving terror, some starving. Experts such as  Badreddine El Harti, Chief, Ceasefire Monitoring  Component, United Nations  Support Mission in Libya, Yonas Adayer Adeto, Commissioner, the Ethiopian  National Dialogue,  or Lieutenant  General Daniel Sidiki Traoré, Force Commander, United Nations, Multidimensional  Integrated Stabilization Mission in the Central African Republic, spoke about  their activities in war zones, the lessons they learned,  reflecting on  the classic Beatle song, “all we are saying is give peace a chance.” Three peacekeepers and at least 12 civilians were killed a few days after the Rabat conference during anti-UN demonstrations in the eastern region of the Democratic Republic of Congo (Reuters, July 27, 2022), demonstrators complaining that the UN police and troops failed to protect civilians against militia violence, which is troubling the nation for years.   Birame Diop, a Senegalese General, member of the Un Peacekeeping force, stated in a panel debate, “it’s impossible to live without conflict in our time”. The seasoned military officer, for years in the service of the UN peacekeeping forces, did not hesitate to propose that the UN “needs to reinvent its peacekeeping concept”, ready “to adapt its missions to our time.” For decades, reported the “Council on  Foreign Relations” (October 5, 2021) ,more  than fifty thousand troops are deployed for UN operations in Africa, and tens of thousands more deployed for regionally led missions in countries where civil wars or insurgence are threatening to destabilize regions. Rama Yade, Senior Director at the” Atlantic Council’s” Africa Center in Washington, former French government member, and UNESCO ambassador, supported the general’s opinion at the APSACO conference in Rabat.” The UN in New York complained the former secretary of state for human rights, “is talk and talk. It is time for reform. It feels the UN did not change in 77 years”. Madame Yade was “not surprised”, she stated in a podcast- produced by the “Policy Center For The New South”, that in march of this year, 17 African nations decided to abstain in a vote taken to condemn the Russian invasion of Ukraine- these 17 nations remained neutral, because “they were protecting their strategic interests”. In early June Senegalese President Macky Sall, current chairman of the African Union, and Moussa Faki Mahamat traveled to Sochi, Russia, to remind Vladimir Putin, African countries are “victims” of the crisis and called for the resumption of grain and fertilizer shipments. The times have changed, Rama Yade insists, “the world is not limited to Europe anymore”,  Africa deals with a variety of partners,  Russia, China, the Emirates, and even Turkey.Facing competition, surprise, surprise, Washington is changing its attention towards Africa- in December, US President Joe Biden is staging a summit for 50 or so African heads of state.” A great opportunity, “believes Africa expert Yade, “hopefully they do get into fundamentals, and not get lost again in the typical diplomatic superficialities.” Mid 2023, reported “Telesur”, (July 23, 2022) Moscow will invite Africa’s leaders to its second Russian African summit. In late July, France’s President Emmanuel Macron visited three African nations, Benin, Cameroon, and Guinea Bissau but avoided the war zone of Mali, where some French (and German) units are stationed. Who knows, Rama Yade stated, the energy crises may even lead other European leaders to the often stigmatized continent and “change their attitudes towards Africa.”,  drawn by some 30 percent of the world’s mineral reserves, eight percent of the globe’s natural gas and 12 percent of the oil reserves, which could protect Europe from freezing this winter. As Macron, Moscow’s Foreign Secretary, Sergey Lavrov,    last month to the continent, flying 13000 kilometers in five days to visit  Egypt, Uganda, the  Republic of Congo, and  Ethiopia, a trip “Le Monde”  (July 26, 2022) commented, “ looks like a charm offensive. ” The Russian politician promised nations like Egypt, which receives 80 percent of its wheat from Russia and Ukraine (and fears, as “Le Monde” reported, “food riots”) that “Russian grain exporters will respect all obligations. “Ursula von der Leyen, President of the European Commission, complained at the “World Economic Forum” (Public.Affairs@weforum.org, May 24, 2022) Russia “is using food as a weapon, and hunger and grain to wield power.” At the end of the APSACO conference   Rama Yade offered one advise:” It’s important that Africa searches for its solutions and does not wait for others.” Easier said than done.