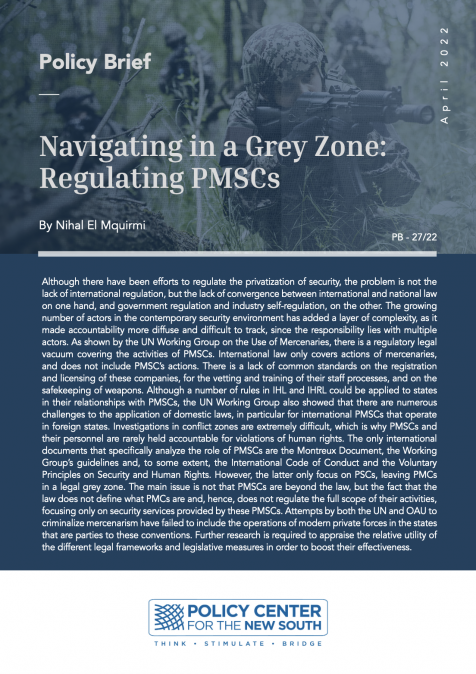 Although there have been efforts to regulate the privatization of security, the problem is not the lack of international regulation, but the lack of convergence between international and national law on one hand, and government regulation and industry self-regulation, on the other. The growing number of actors in the contemporary security environment has added a layer of complexity, as it made accountability more diffuse and difficult to track, since the responsibility lies with multiple actors. As shown by the UN Working Group on the Use of Mercenaries, there is a regulatory legal vacuum covering the activities of PMSCs. International law only covers actions of mercenaries, and does not include PMSC’s actions. There is a lack of common standards on the registration and licensing of these companies, for the vetting and training of their staff processes, and on the safekeeping of weapons. Although a number of rules in IHL and IHRL could be applied to states in their relationships with PMSCs, the UN Working Group also showed that there are numerous challenges to the application of domestic laws, in particular for international PMSCs that operate in foreign states. Investigations in conflict zones are extremely difficult, which is why PMSCs and their personnel are rarely held accountable for violations of human rights. The only international documents that specifically analyze the role of PMSCs are the Montreux Document, the Working Group’s guidelines and, to some extent, the International Code of Conduct and the Voluntary Principles on Security and Human Rights. However, the latter only focus on PSCs, leaving PMCs in a legal grey zone. The main issue is not that PMSCs are beyond the law, but the fact that the law does not define what PMCs are and, hence, does not regulate the full scope of their activities, focusing only on security services provided by these PMSCs. Attempts by both the UN and OAU to criminalize mercenarism have failed to include the operations of modern private forces in the states that are parties to these conventions. Further research is required to appraise the relative utility of the different legal frameworks and legislative measures in order to boost their effectiveness.