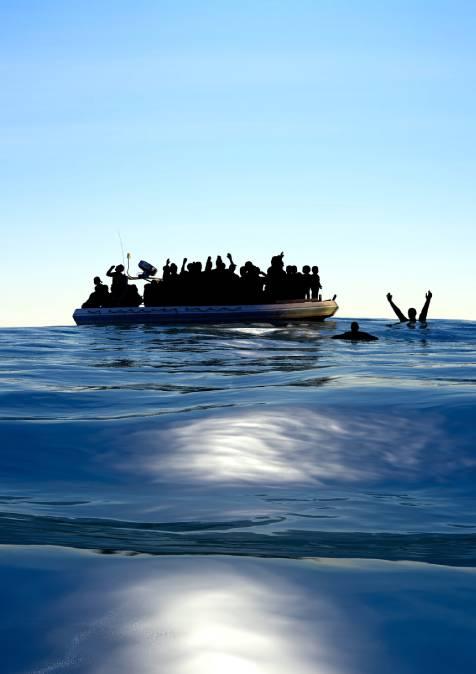 Share
And then I lost her
Authors
Helmut Sorge

Their boat-if you name a large rubber pumped up like a giant tire, was rocked by waves, and the engine halted its movements. On November 24, all the 29 passengers tried to reach coastguard stations in France and England via their cell phones few minutes between life and death.

No one answered, and when finally contact was established by another, still floating migrant boat, witnessing the tragedy in the making (New York Times December 14, 2021), they were asked to pinpoint their location, they did not know, since they were praying for survival on the Channel, which measures  21 miles  between South Foreland northeast of Dover, to Cap Gris Nez, a cap near Calais. The deflated dinghy sank in the Atlantic Ocean of which the Channel is a part, and 27 people  drowned with their dreams and illusions, victims of misery at home and cynicism in the countries supposed to cultivate humanity and fraternity.

Mohammed Karzan, a Kurd living in England, had been in continuous contact with his  Kurdish fiancée Maryam Nuri Mohamed Amin, a 24-year-old student.  At the same time, she was traveling through Germany and France to reach the clandestine boat she was to travel on, the Channel crossing paid with several thousand euros. From the minute Maryam stepped onto the boat, Mr. Karzan was tracking her GPS coordinates,”after four hours and 18 minutes, the contact broke off” and “then I lost her.” (’The Guardian November 27, 2021).

A migrant from Somalia and an Iranian Kurd survived, saved by a fishing boat.  The 27 victims, mainly Iraqi Kurds, were the most significant single loss of life in the Channel since the International Organization of Migration began collecting data in 2014 (UN.org, November 25, 2021)”.

Another day of drama in the Channel, another “escalating war on words “(CNN November 25, 2021), a public argument between London and Paris, of whom to blame for the continued drama in the channel, one of the busiest shipping lanes on the globe. Yet, “the very next morning as the BBC reported (November 27, 2021), “more vessels left France’s northern shores to England, packed by people undeterred of what had happened the day before. ”Their determination was driven by despair, a camp, or rather a dump, somewhere near railroad tracks, did not offer the warmth or hope, no running water, no sanitation, and little food, plus spending nights on the  bone-cold ground”, noted Tim Adams in the Guardian (November 27, 2021),”you want to be anywhere, but here. Having been forced out of home and everywhere else, the promise of the UK is the next place, or the last place, on the line.”

In the absence of safer alternatives”, agrees Pascale Moreau, UN High Commissioner for Refugees- Director of the Regional Bureau for Europe, (November 25, 2021) “people will continue to resort to such perilous journeys, and their desperation and vulnerabilities will continue to be preyed upon and exploited by ruthless smugglers.”  French police are on patrol at the beaches like the plage du Break between Calais and Dunkirk, yet superiors are not always motivated or even encouraged to stop the migrants. They are hiding near departure points, ready to jump onto the dinghies once the coast is clear of law and order. This year, January 13, ten small boats with 270 migrants aboard, survived the crossing and reached the English coast, confirmed the British home office.

“A story of a crisis”, reported BBC (November 27, 2021), “from   guerilla-style smuggling operation among the French dunes to streams of soaking passengers washing ashore in Kent.” About 1600 boats have reached UK waters in the past two years, with dozens landing along a stretch of coastline from Joss Bay near Margate in the east, to Hastings of the west, the majority making landfall in Dungeness, the most southerly tip of the county of Kent. On October 10, Haroon Siddique wrote in the Guardian under the headline “1100 migrants cross Channel on small boats to the UK in two days.” The BBC reported (January 17, 2022) that 28 431 migrants made the crossing in small boats in 2021.

Damien Careme, Member of the European Parliament of the Green Party and for years mayor of the French coastal town of Grande Synthe sees tragedies, as the death of the 27 migrants of November 24, “as the direct consequences of the militarization of the borders between France and the UK, of brutalization and harassment of exiles on the French side, and the inhuman hardening of the immigration policy of Johnson’s government to reassure the British of Brexit The Guardian (November 27, 2021)”On Monday, January 17, the BBC reported that the Royal navy is set to take over English channel operations, looking to limit migrant crossings in small boats – an operation attempted ,without success ,by the navy a few years ago. Natalie Elphicke, a British MP for Dover, where many of the boat migrants arrive from France, complained (CNN ,November 25, 2021) “the French are standing by where people are getting into boats and they are not stopping them.  That’s where the policy needs to change, on the French side.”

The Channel is not the only strait to turn into a graveyard for migrants, uprooted, deprived of their culture and history, forced to search for survival and human dignity.   Dover is just one point of hope,  Italy’s island of Lampedusa, is a familiar spot for those willing to risk their lives, trying to reach European Union land-- 290 Mediterranean miles away from Libya. Desperate dreamers having heard of the remote southern Moroccan town of Tarfaya, located just about 80 miles across the Spanish Island of Fuerteventura, seems another point of hope to arrive in the European Union. The Canary Islands are tempting a growing number of West Africans and Moroccans, dreaming of a better life,  often their illusion and unrealistic expectations in the end are turning into depression and frustration.

According to the International Organization for Migration (IOM), since 2014, almost 200 migrants have been recorded dead or missing in the English Channel, and 22 930 have been registered dead or lost in the Mediterranean Sea. The UNHCR says an estimated 1600 people died or disappeared in the Mediterranean Sea this year while trying to reach Europe from the  Northern African States or Turkey. Hundreds more have perished in the Atlantic Ocean off West Africa on a migrant route to Spain’s Canary Islands. In its report  “Migration routes”, “ Irregular migration towards Europe/ Western Africa -Atlantic route, Jan-Dec 2020”  the IOM summarized ( March 23, 2021), “this route, already active in 2006 saw an increased number of movements in 2020. Between January and December 2020   23023 individuals reached the Canary Islands irregularly after boat crossing from the coast of West Africa.  This is, stated the IOM “a 750 percent increase of arrivals compared to the same period 2019.”

In September 2021 the IOM reported a sharp increase in the deaths and disappearances of migrants at sea heading to Spain’s Canary Islands, along the West African coast. By the end of September 785 people, including 177 women and 50 children have died or disappeared in 2021.Some people just are luckier than others. When the leader of the Catholic Church, Pope Francis, visited, early December 2021,  Greece, and Cyprus, he returned to the island of Lesbos, where 3500 refugees, mostly Afghans, are housed.  During the first visit five years ago, the Pope took 12 refugees back to Rome. On this voyage the Bishop of Rome invited 50 migrants stranded in Cyprus, to join him in the Vatican, thus avoiding their temptation to seek shelter in Europe by paddling with an old truck tire or swimming to a better life.

The  pontiff’s message to nations unwilling to accept more and integrate  ever more migrants:” Let us stop ignoring reality, stop constantly shifting responsibility, stop passing off the issue of migration to others as if it mattered to no one and was only a pointless burden to be shouldered by someone else.”(Euronews.com, December 5, 2021). Visiting the  refugee camp on  Lesbos, reported the New York Times (December 5, 2021) ”Francis said that because of Europe’s moves to deter and block migrants,the  Mediterranean Sea, the cradle of so many civilizations, now looks like a mirror of death.”