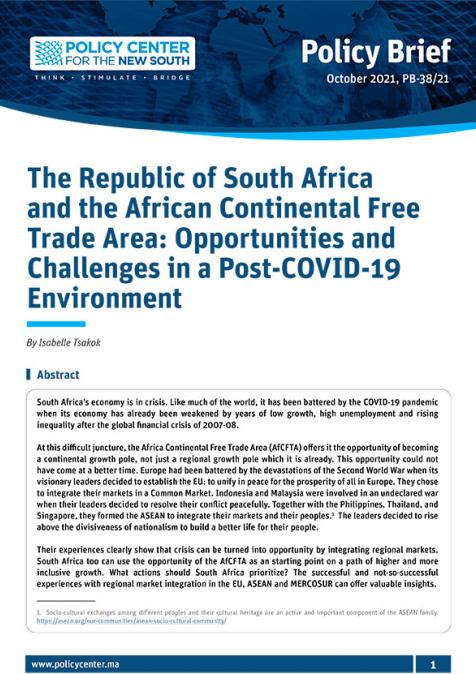 South Africa’s economy is in crisis. Like much of the world, it has been battered by the COVID-19 pandemic when its economy has already been weakened by years of low growth, high unemployment and rising inequality after the global financial crisis of 2007-08.
At this difficult juncture, the Africa Continental Free Trade Area (AfCFTA) offers it the opportunity of becoming a continental growth pole, not just a regional growth pole which it is already. This opportunity could not have come at a better time. Europe had been battered by the devastations of the Second World War when its visionary leaders decided to establish the EU: to unify in peace for the prosperity of all in Europe. They chose to integrate their markets in a Common Market. Indonesia and Malaysia were involved in an undeclared war when their leaders decided to resolve their conflict peacefully. Together with the Philippines, Thailand, and Singapore, they formed the ASEAN to integrate their markets and their peoples.1 The leaders decided to rise above the divisiveness of nationalism to build a better life for their people.
Their experiences clearly show that crisis can be turned into opportunity by integrating regional markets. South Africa too can use the opportunity of the AfCFTA as an starting point on a path of higher and more inclusive growth. What actions should South Africa prioritize? The successful and not-so-successful experiences with regional market integration in the EU, ASEAN and MERCOSUR can offer valuable insights.