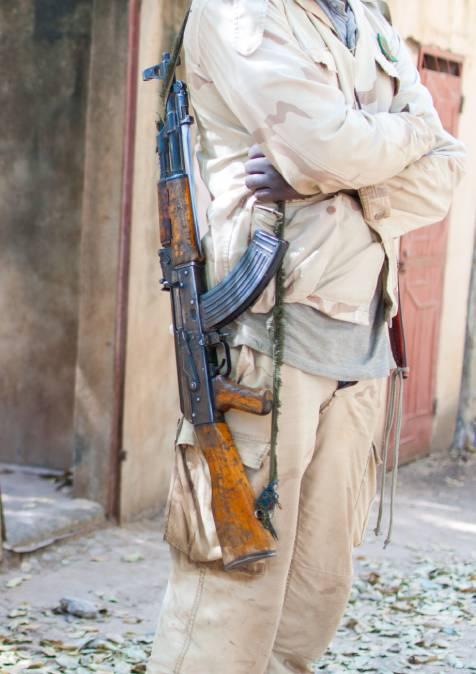 This article was initially published on usip.org

The presence of CBAGs raises issues that force a rethink of local implementation of peacebuilding processes.

The RESOLVE Network’s multiyear research on Community-Based Armed Groups (CBAGs) has established critical findings for the international community on how to engage, manage and transform violent actors in conflict-affected states. While mitigation efforts tend to target anti-state extremist organizations, understanding the behavior of CBAGs is essential for comprehending complex conflict ecosystems and reassessing approaches toward peace and stability.

What Can CBAGs Tell Us About Conflict?

CBAGs are a subset of non-state armed groups (NSAGs) defined by the local ambitions of their stakeholders and a negotiated relationship with the state or community leaders. Often embedded in communities, CBAGs can be deputized by the state to provide local security, serve at the discretion of local governance institutions or occur in areas with minimal state presence. CBAGs are a fixture in hybrid governance systems, where the state lacks control or recognizes the legitimacy of local governance actors. Insurgent groups also often operate in these areas, undermining state authority.

Jihadist groups, particularly Katiba Macina, an arm of Jama’at Nusrat al-Islam wal-Muslimeen (JNIM), gained a foothold in the region by exploiting preexisting grievances of the pastoralist Fulani community, a group long marginalized by the state. The state’s inability to suppress the jihadists empowered other communities to mobilize in self-defense. The increased recruitment of Fulanis by Katiba Macina has resulted, for example, in the consolidation of anti-Fulani ethnic groups, legitimizing a Dogon-majority CBAG, Dan Na Ambassagou, among ethnic Dogon communities. Traditional hunters’ groups among the Bambara and other ethnic groups have also transformed into self-defense groups to protect their communities from the jihadists. A spate of communal attacks and clashes resulted, destabilizing the region.

The proliferation of ethnic CBAGs further weakened traditional institutions and the hybrid governance system that had long balanced inter-group relations and provided security through negotiated pacts. Group relations are now mediated by the alliances and strategies of armed groups. The emergence of CBAGs also altered JNIM’s strategies and aims, forcing it to extend its political power base. Notably, JNIM has eschewed religious-based governance structures to attract non-Fulani recruits. Moderating its ideological and ethnic identity will impact JNIM’s organization, potentially expanding its recruitment networks but degrading operational control over the use of violence.

The Tillabéri and Tahoua regions in Niger have witnessed similar trends over the past two years. The failure of the state to respond to increased threats from the Islamic State in the Greater Sahara (ISGS) destabilized hybrid governance structures that traditionally balanced competition and inspired the Tuareg, Arab and Zarma to mobilize CBAGs. ISGS has responded ruthlessly, leading to a cycle of reprisal attacks and abductions of civilians. It is unclear how these shifting dynamics between CBAGs and jihadists will influence ISGS’s alliance strategy, aims, recruitment and execution of violence. While traditional authorities since post-colonial times fulfilled governance roles for the state, they are today on the front lines against ruthless actors without effective protection from the state. This gives legitimacy to the creation of CBAGs and demonstrates further the state’s failure to protect its people against ISGS.

Across Africa, CBAGs exist in symbiotic relationships with communities. They often draw their legitimacy from preexisting political institutions and can reshape identity and power relationships among community actors. CBAGs are not only security actors; they play critical political roles given their foundations in nonviolent social movements, hunters’ organizations, initiation societies and religious doctrine. Hisbah in northeast Nigeria, for example, are charged with regulating religious, political and moral affairs within communities. The Oodua People’s Congress and the Arewa People’s Congress in Nigeria protect their ethnic groups’ identities and right to self-determination, while providing defense against rival communities. Sometimes CBAGs are recognized political parties that promote civic culture or oppose state politics.

Given their links to traditional political institutions and local legitimacy, CBAGs can be a stabilizing force within communities, fulfilling dispute settlement functions in the absence of government authority. However, they may also exacerbate conflict and inequality between groups. Where states are militarily weak and require support of local security forces, the same links may inflame local political competition.

Participation in CBAGs can be a conduit to expand political and social activism, especially for women. Even in traditional societies where male and female roles are differentiated, norms of gender complementarity within CBAGs can allow women to serve their communities when security needs are great. Thus, women’s expanded duties within society can lead communities to reassess the suitability of political and social restrictions on women’s activities, potentially yielding longer-term shifts in gender roles.

How Do CBAGs Change Peacebuilding?

Disarmament, Demobilization and Reintegration (DDR): Policy prescriptions formulated for managing violent non-state actors (i.e. rebels and terrorists) may not be applicable to CBAGs. Since many CBAGs serve political functions and are rooted in local traditions, they are unlikely to cease to exist when conflicts end. They cannot be expected to demobilize or disarm without a viable security alternative — a sizable challenge since many CBAGs emerge and operate in hybrid systems where the state is not a key security provider. As long as they remain under threat and state security forces are absent, malignant or ineffective, communities will not demobilize CBAGs willingly. However, national-level security sector reform and local accountability processes that address local actor abuses and atrocities may aid efforts to demobilize CBAGs.

Gender: Women are not only peacebuilders in their communities nor are they only victims; women play important roles as both combatants and noncombatants and offer informal support by affirming or disavowing men’s participation in CBAGs. Women’s relationships with CBAGs demands that the policy community look beyond stereotypical ideas of women’s roles and a reflexive nod to gender inclusion. Policymakers, practitioners and stakeholders should abandon current generic approaches to gender and peacebuilding for more localized, nuanced interventions that reflect women’s diverse contributions across contexts. Policies should consider how women engage with CBAGs and remember not all women are inclined toward peaceful settlements of conflicts. Women’s participation in CBAGs demands DDR programs consider the needs of female militants that participate in local armed groups.

Do No Harm: The growing securitization of inter-group relations in Central Mali and Niger eviscerated local hybrid governance institutions and their traditional balancing mechanisms. However, the international intervention in the Sahel also contributed to this escalating violence by degrading traditional governance, enticing CBAGs into alliances guaranteeing increased resources and enhanced status. In Niger, the French-backed Operations Serval and Barkhane sought alliances with Tuareg groups for intelligence gathering, monitoring and access to territory, driving their enemies, the Fulani, to align more deeply with jihadist groups. International actors have propelled CBAGs’ parochial agendas while unmooring them from their communities and local constraints. In mobilizing CBAGs for a global agenda, the international intervention has privileged short-term tactical security gains at the expense of long-term local stability, weakening those community security and governance structures that provide a legitimate alternative to the jihadist movement and that can constrain local conflict.

CBAGs both influence and reflect community power dynamics. Understanding their roles and relationships within the community is critical for achieving peace at the local level in regions historically governed by hybrid systems. The transformative impact of CBAGs on community roles and identities, often resulting in a replacement or enhancement of traditional power structures, should be recognized and incorporated into local peacebuilding strategies. In addition, while CBAGs and local conflict are mostly perceived as reflections of communities, they are also a manifestation of international policies. International policymakers play an important role in shaping local dynamics of violence and thus identity shifts in armed groups.