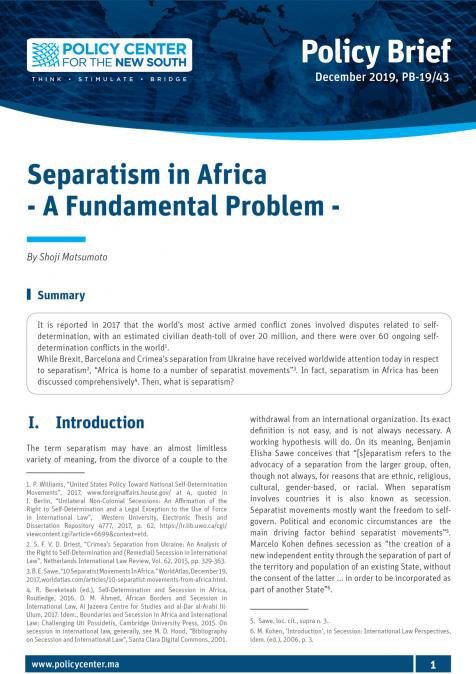 It is reported in 2017 that the world’s most active armed conflict zones involved disputes related to selfdetermination, with an estimated civilian death-toll of over 20 million, and there were over 60 ongoing selfdetermination conflicts in the world. While Brexit, Barcelona and Crimea’s separation from Ukraine have received worldwide attention today in respect to separatism, “Africa is home to a number of separatist movements”. In fact, separatism in Africa has been discussed comprehensively. Then, what is separatism?

The term separatism may have an almost limitless variety of meaning, from the divorce of a couple to the withdrawal from an international organization. Its exact definition is not easy, and is not always necessary. A working hypothesis will do. On its meaning, Benjamin Elisha Sawe conceives that “[s]eparatism refers to the advocacy of a separation from the larger group, often, though not always, for reasons that are ethnic, religious, cultural, gender-based, or racial. When separatism involves countries it is also known as secession. Separatist movements mostly want the freedom to selfgovern. Political and economic circumstances are the main driving factor behind separatist movements”5. Marcelo Kohen defines secession as “the creation of a new independent entity through the separation of part of the territory and population of an existing State, without the consent of the latter ... in order to be incorporated as part of another State”.