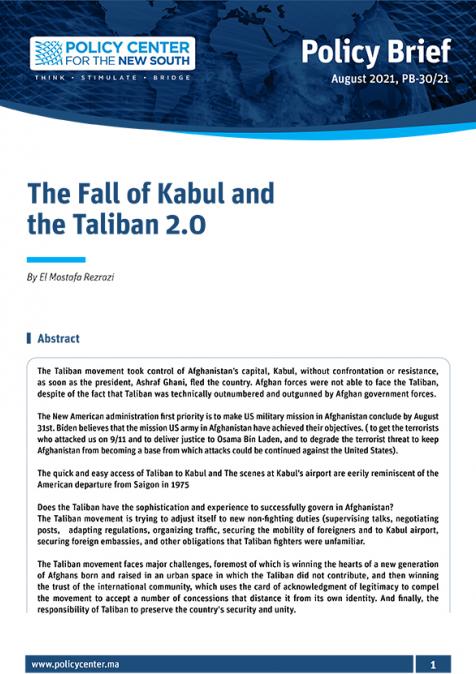 The Taliban movement took control of Afghanistan’s capital, Kabul, without confrontation or resistance, as soon as the president, Ashraf Ghani, fled the country. Afghan forces were not able to face the Taliban, despite of the fact that Taliban was technically outnumbered and outgunned by Afghan government forces.
The New American administration first priority is to make US military mission in Afghanistan conclude by August 31st. Biden believes that the mission US army in Afghanistan have achieved their objectives. ( to get the terrorists who attacked us on 9/11 and to deliver justice to Osama Bin Laden, and to degrade the terrorist threat to keep Afghanistan from becoming a base from which attacks could be continued against the United States).

The quick and easy access of Taliban to Kabul and The scenes at Kabul’s airport are eerily reminiscent of the American departure from Saigon in 1975
Does the Taliban have the sophistication and experience to successfully govern in Afghanistan?
The Taliban movement is trying to adjust itself to new non-fighting duties (supervising talks, negotiating posts, adapting regulations, organizing traffic, securing the mobility of foreigners and to Kabul airport, securing foreign embassies, and other obligations that Taliban fighters were unfamiliar.

The Taliban movement faces major challenges, foremost of which is winning the hearts of a new generation of Afghans born and raised in an urban space in which the Taliban did not contribute, and then winning the trust of the international community, which uses the card of acknowledgment of legitimacy to compel the movement to accept a number of concessions that distance it from its own identity. And finally, the responsibility of Taliban to preserve the country's security and unity.

Afghanistan will witness in the coming weeks increased interactions, whether about the design of a new governing administration, the preservation of security in various regions of the country, or by confronting Western media campaigns that try to undermine the Taliban’s reputation and credibility. However, it is also expected that the Taliban will strengthen their talks with Washington to secure a peaceful withdraw of American forces, as with Russia, Pakistan, and China, and other countries that sent positive messages with the aim of normalizing their relations.
The duties of governance and the political and technical management of public life put the Taliban in front of several challenges. But these challenges might disrupt the dream of rebuilding the Islamic Emirate, as they are obliged to respect their commitments related to restoring confidence among Afghans, reassuring international public opinion, expanding freedoms, reconstructing the economy, and protecting the country from insecurity—it is possible that pockets of resistance. We should acknowledge that relevant analysis to these changes taking place in Afghanistan, requires to take into consideration: ( a) the transformations that occurred in Afghanistan in terms of demography and urbanization (especially the capital, Kabul), ( b) changes experienced by the Taliban movement in terms of its leading figures, its narratives, and its political and military organizational structures, (c) then the shifts of the American foreign policy and national security doctrine over the past two decades.

Certainly, the fall of Kabul in the post-COVID-19 world order coincides with the birth of the new American new era, and a Taliban 2.0 that we need to understand better.