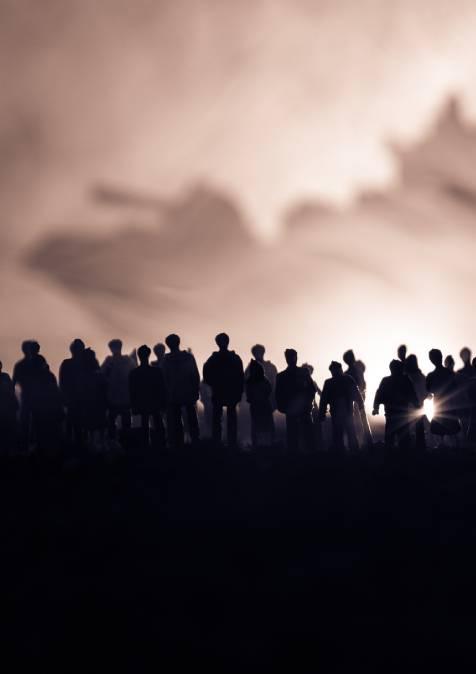 As of March 3, 2022, one week into the Russian invasion, over 1 million refugees (2.3% of the Ukrainian population) have fled Ukraine to neighboring European countries, notably Poland, as well as Hungary, Moldova, and Slovakia[1].  While the sheer flow of refugees is poised to generate the largest migration crisis in Europe since World War II, the response of European countries is substantially different from the one caused by the Syrian refugee crisis of 2015 - 1 million refugees in just a few months - or concerns over a massive influx of Afghan refugees following the withdrawal of Western forces and Taliban takeover August 2021.

Still, the refugee influx is likely to be enormous.  The United Nations Refugee Agency (UNHCR) puts potential refugee numbers over the next few months at four to seven million people, far exceeding the total number of migrants and refugees arriving in Europe over the past seven years.  While the 2015 migration crisis threatened to disintegrate the European Union, where member states have yet to agree on a system for redistributing undocumented migrants and refugees, the Ukrainian migration crisis unfolds with limited concern in European countries, outside of the always challenging task of coordinating humanitarian assistance[2].  This is certainly nothing compared to the hysteria generated just a few months ago when a few thousand Iraqi and Afghan refugees driven by Belarus tried to enter the European Union (EU) through Poland and Lithuania between September and November 2021, to be turned back and deemed a "hybrid threat," i.e., an act of war, to the point of prompting the construction of a fence along the Poland=Belarus border.

This time around, the fate of the people of Ukraine seems to be of much greater concern than the impact of refugee influx on European societies.  Instead, the EU activated provisions of the 2001 Temporary Protection Directive for the first time on March 3, providing for unlimited admission of refugees during a crisis, with immediate and automatic acceptance of refugee status-  without requiring an application for asylum and therefore avoiding the lengthy administrative process of recognition - and with the right to access essential services - accommodation, food aid, health care, education - and a work permit for an initial period of three years.  Ironically, it is Poland, a country most staunchly opposed to any kind of openness towards non-EU refugees, that has emerged as the champion for receiving Ukrainians displaced by the war, stating that it is ready to receive "as many Ukrainians as will arrive at our borders".  Meanwhile, European Commission President Ursula von der Leyen declared that "all those fleeing Putin's bombs will be welcomed with open arms".

A different kind of refugee

Until the impact of this new influx clears-up over the longer term, and the European response which, among other things, depends on conflict length and the extent of refugee flows, the following are a few explanations for the very different reaction:

- European war:  The war in Ukraine is European, and solidarity with Ukrainian refugees is seen as part of a unanimous stand against Russia.  Wars in Syria, Afghanistan, Libya or Ethiopia do not stir European public opinion in the same way as a war on European soil does;

- Ukrainian diaspora: A number of European countries already host a significant Ukrainian diaspora.  These are migrant workers who have arrived starting in the 90s, in a continuous flow: with almost one million in Poland (330,000 of which have residency permits) and over 200,000 in Germany, Italy or the Czech Republic.  Networks of Ukrainian diaspora relatives and friends quickly mobilized to welcome the refugees.  Furthermore, Ukrainian citizens already enjoy visa-free entry into the EU since 2017, where they can remain for 90 days on simple presentation of their passport;

- Cultural and ethnic similarity: Ukrainians are ethnically Slav Orthodox Christians.  As such they are able to blend in easily in countries like Poland;

- Shared borders: The human tide of Ukrainians is considerably more difficult to stop than the flow of Syrian refugees; Countries of first arrival are European.  While the EU managed to retain 3.6 million Syrian refugees in Turkey, that is, far from its territory (three times as many as it took in), Ukraine shares nearly 1,400 kilometers of direct land borders with four EU member states: Poland, Slovakia, Romania and Hungary.  Not counting Russia and Belarus, and Moldova, which also shares a 1,200-kilometer border with Ukraine, Ukrainian refugees have no alternative but those four EU countries.

Ultimately, while Europe must face a full-blown migration crisis of unprecedented magnitude, it appears to be calmly gearing up to accommodate these new refugees in the best humanitarian conditions, and to eventually incorporate them into European societies and labor markets.  This shows that for all the talk of a migration crisis in 2015 when migrants came predominantly from Syria, Afghanistan and Africa, this was primarily a crisis of acceptance and rejection of non-European migrants from Muslim or African countries.

Yet this new spirit does not benefit all refugees from the war in Ukraine.  Citizens of third countries, including tens of thousands of African students trapped by the war, are segregated on the ground, received separately from Ukrainian nationals and only granted temporary visas until they return to their home countries.  Cases of denial of boarding on trains and buses in Ukraine and rejection at borders have also been reported.  This discrimination prompted the African Union (AU) to reiterate that "anyone entitled to cross borders during a conflict should enjoy the same rights regardless of nationality or racial identity," in a February 28 statement, and that it considers the practice of "differing treatment" to be "shocking, racist," and unacceptable[3] .  This, only two weeks after the 6th European Union-African Union Summit and despite the European Commissioner for Home Affairs announcing that the intake of refugees from Ukraine extends to citizens of third countries fleeing that country, at a first special meeting of interior ministers held in Brussels on February 27.

[2] United Nations estimates the need for short-term humanitarian assistance in Ukraine and neighboring countries at USD 1.7 billion, including USD 550 million for refugees;  https://www.unhcr.org/fr/news/press/2022/3/621f65c1a/lonu-veut-mobiliser-17-milliard-dollars-repondre-besoins-humanitaires-ukraine.html.