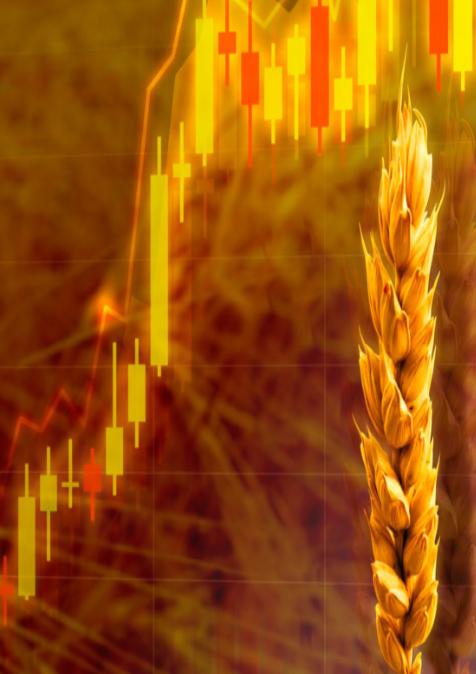 The world food price index collected for the last 60 years by the United Nations Food and Agriculture Organization (FAO) hit its highest record in March, declining gently in April.

Pandemic, war and death in Ukraine, and droughts in the last 2 years… Such a combination looks apocalyptical. Now it is adding global hunger risks, because of the food price crisis.

The rise in global food prices started in mid-2020 because supply chain disruptions triggered food stockpiling. Mobility restrictions on migrant labor also affected harvests in many parts of the world.

Since then, weather phenomena have also brought problems with major crops in many parts of the world. Brazil, the world's biggest soybean exporter, suffered a severe drought in 2021. This year, China's wheat crop is among the worst ever. India's high temperatures – 45 degrees centigrade in April – have hit its “wheat belt”. In contrast, its super-crop last year made up for crumbling crops from other exporters such as Canada and Argentina. A report released last week by the United States Department of Agriculture forecasted a drop in 2022 of the global wheat crops and regulatory stock levels.

An additional shock came with Russia's invasion of Ukraine in late February. Nearly one-third of the world's wheat and barley and two-thirds of global sunflower oil exports come from the two countries. Ukraine is the largest corn exporter in the world. The conflict has damaged Ukraine's ports and agricultural infrastructure, which will undoubtedly limit the country's agricultural production for years to come.

The volume of grains produced in Ukraine fell from 5 million tons per month to 500,000. The post-meeting communiqué of G7 foreign ministers in Germany last Saturday warned of a global hunger crisis if alternative means of exporting the country's grain by land are not found. According to the German minister, Annalena Baerbock, about 25 tons of grain are currently blocked by Russian armed forces in Ukrainian ports. Western sanctions on Russia have led some buyers to avoid buying grain from the country.

The energy price shock caused by the Russian invasion will also impact food prices. The energy price increase in the last two years has been the biggest in 50 years. And a spike in fertilizer prices reflected not only the reserve for neighbors announced by Russia, but also the fact that, for example, nitrogen-based fertilizer production makes intensive use of now-more expensive natural gas. Russia and its ally Belarus mine nearly 40% of the world's potash that is used as an input for another type of fertilizer. Higher fertilizer prices – Figure 1 - will be felt in the current seasons. 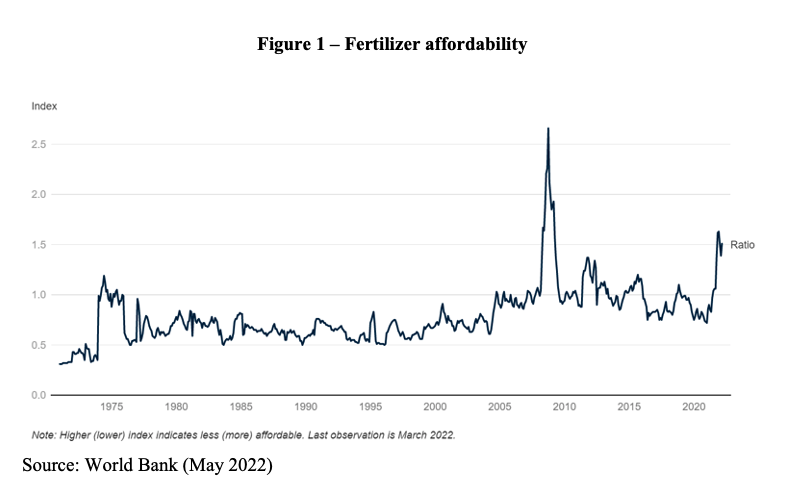 As if all this were not enough, in the name of “food security”, export restrictions and the storage of basic products to avoid future shortages have been practiced by countries since the pandemic, with consequences on the supply in the global market. 35 countries have adopted export controls in the last two years. Parallels can be drawn with what occurred in the global food price crisis of 2007-08.

Kazakhstan, for example, the world's second-largest wheat flour exporter and a Russian grain dealer, has banned exports. Last Saturday, India, which is among the top 10 wheat exporters in the world, announced a ban on sales abroad (Figure 2). The impact of India’s announcement on global prices has already been felt on Monday, May 16. 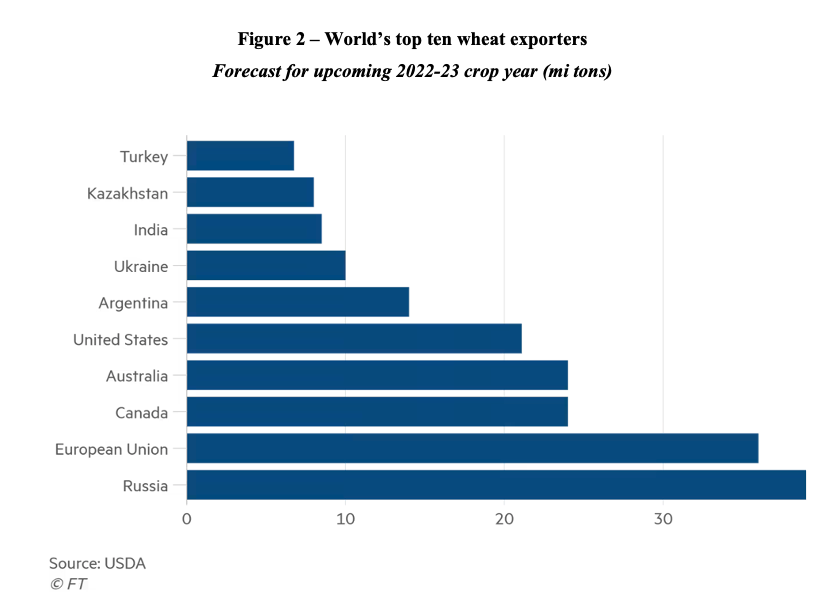 And other examples of protectionism via banning foreign sales follow. Indonesia, responsible for 75% of the world's palm oil production, banned exports in late April to secure domestic cooking oil supplies. The explosive increase in food prices, in general, has been even more significant in the case of vegetable cooking oils (Figure 3). 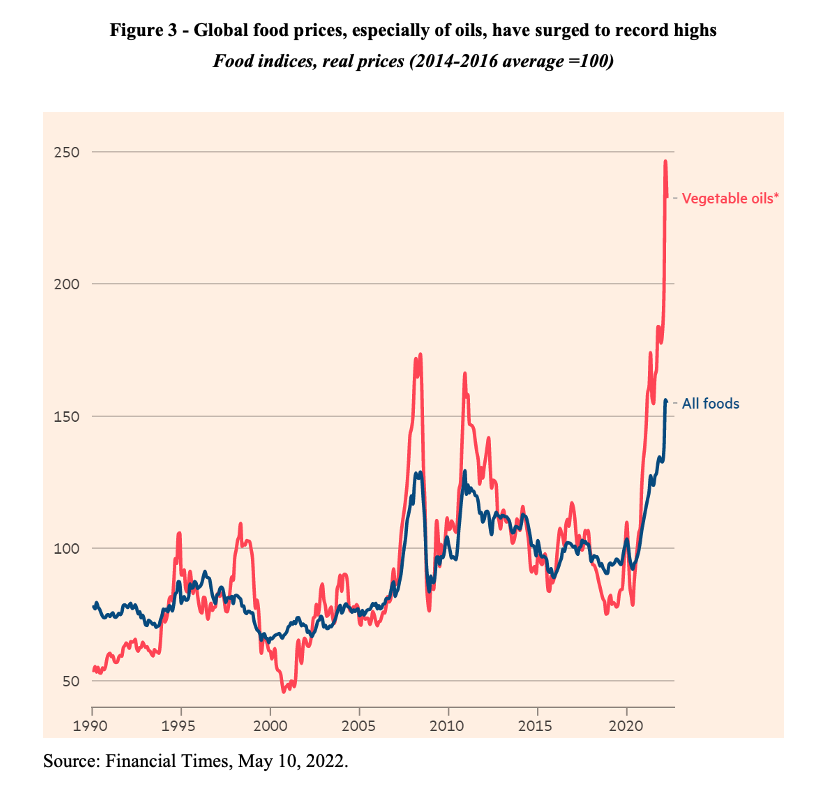 Rising food prices and, in some countries, the risk of social upheavals have led to an increase in the number of exporters banning foreign sales or establishing export tariffs or quotas. These protectionist measures further increased the food import bill for countries dependent on international markets for the domestic supply of food commodities, hitting some of the poorest in the world.

The impact of the ongoing crisis has been differentiated by regions and levels of economic development. Middle East and North African countries have wheat as 50-70% of grain consumption, mainly imported from Russia and Ukraine. It is worth recalling that wheat prices were one of the “Arab spring” triggers at the beginning of the last decade.

The proportions of wheat in grain consumption in Asia and Latin America are lower: 29% and 16%, respectively. On the other hand, the IMF regional report for Sub-Saharan Africa of April brought warnings about how rising oil and food prices are putting pressure on external and fiscal balances of commodity-importing countries, raising concerns about food security in the region.

Abdelaaziz Ait Ali et al. (2022) have recently approached the connections between the Russia-Ukraine war and food security in Morocco. Colleagues at the Policy Center for the New South have been offering analyses of food security in African and Latin American countries and others since the pandemic.

In any case, no one can claim to be unscathed from the food price shock. Particularly in the case of the poor and the poorest economies, for whom the share of food in the consumption basket is significant (Figure 4). Last year, the World Bank estimated around 100 million people in the world were being pushed below the poverty line of $1.90 a day, a figure that has been compounded by the shocks in place since the invasion of Ukraine. 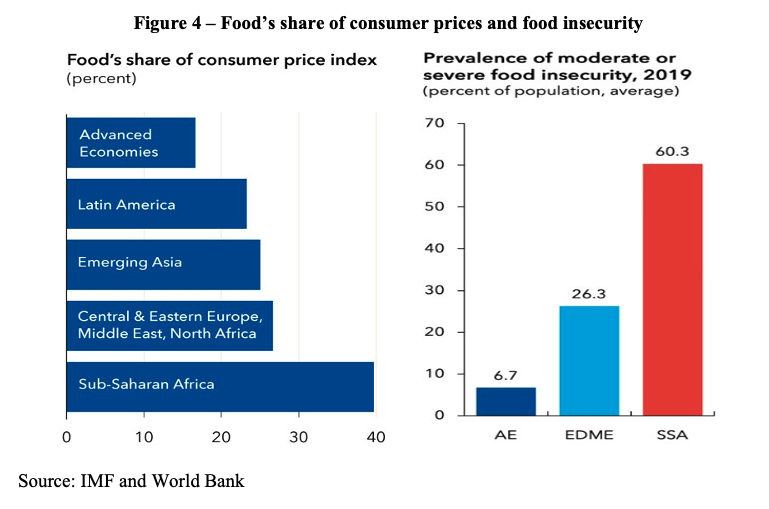 What about national policies for mitigating the effects of food price increases? Not those worsening them, as in the case of protectionism that we mentioned. The IMF's “Fiscal Monitor” report of April provides a survey of measures taken in 94 countries, produced by Roberto Perreli, one of its economists. In many cases, direct subsidies have been given to consumer prices. In contrast, others have established subsidies for seeds and fertilizers used by farmers and in-kind food distribution programs. The fiscal fragility inherited from the pandemic limits such public programs in many developing countries.