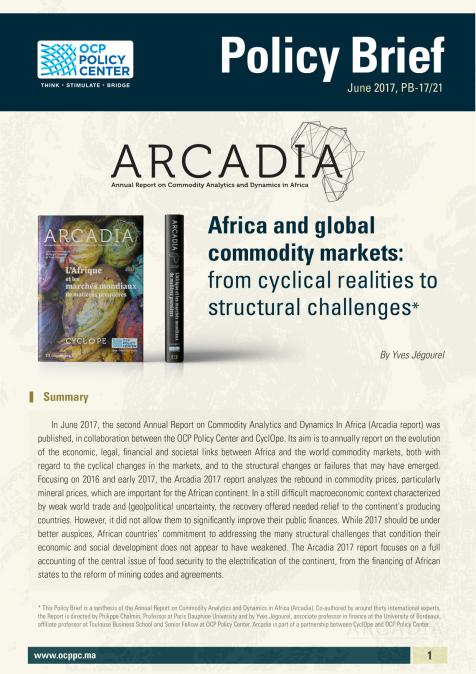 In June 2017, the second Annual Report on Commodity Analytics and Dynamics In Africa (Arcadia report) was published, in collaboration between the OCP Policy Center and CyclOpe. Its aim is to annually report on the evolution of the economic, legal, financial and societal links between Africa and the world commodity markets, both with regard to the cyclical changes in the markets, and to the structural changes or failures that may have emerged. Focusing on 2016 and early 2017, the Arcadia 2017 report analyzes the rebound in commodity prices, particularly mineral prices, which are important for the African continent. In a still difficult macroeconomic context characterized by weak world trade and (geo)political uncertainty, the recovery offered needed relief to the continent's producing countries. However, it did not allow them to significantly improve their public finances. While 2017 should be under better auspices, African countries’ commitment to addressing the many structural challenges that condition their economic and social development does not appear to have weakened. The Arcadia 2017 report focuses on a full accounting of the central issue of food security to the electrification of the continent, from the financing of African states to the reform of mining codes and agreements.