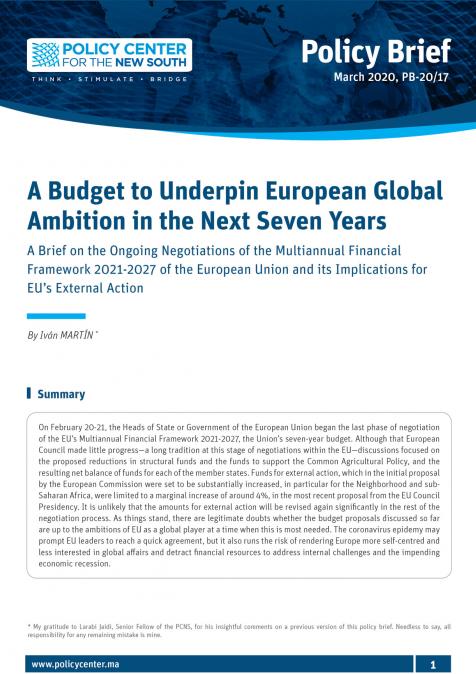 On February 20-21, the Heads of State or Government of the European Union began the last phase of negotiation of the EU’s Multiannual Financial Framework 2021-2027, the Union’s seven-year budget. Although that European Council made little progress—a long tradition at this stage of negotiations within the EU—discussions focused on the proposed reductions in structural funds and the funds to support the Common Agricultural Policy, and the resulting net balance of funds for each of the member states. Funds for external action, which in the initial proposal by the European Commission were set to be substantially increased, in particular for the Neighborhood and subSaharan Africa, were limited to a marginal increase of around 4%, in the most recent proposal from the EU Council Presidency. It is unlikely that the amounts for external action will be revised again significantly in the rest of the negotiation process. As things stand, there are legitimate doubts whether the budget proposals discussed so far are up to the ambitions of EU as a global player at a time when this is most needed. The coronavirus epidemy may prompt EU leaders to reach a quick agreement, but it also runs the risk of rendering Europe more self-centred and less interested in global affairs and detract financial resources to address internal challenges and the impending economic recession.