In the World Economic Outlook, published October 12, the International Monetary Fund (IMF) slightly lowered its forecast for global economic growth this year to 5.9%, while maintaining a forecast of 4.9% for 2022. It also emphasized the “divergence” in the pace and extent of economic recovery in different countries.

Two factors are highlighted in explaining the divergence. First, there are the different paces and extent of vaccination in different countries, that is, the ‘Great Vaccination Divide’. The WEO report shows a positive correlation between vaccination rates and upward revisions in country growth projections since April. The second factor corresponds with national differences in the fiscal space available for recovery support via public policies.

The IMF referred to “lasting imprints” left during divergent recoveries, with emerging and developing economies suffering deeper medium-term damage than advanced countries, on average. Most countries are now forecast to have lower GDP in 2024 than projected in January 2020 before the pandemic. The exceptions are the United States and emerging countries in Eastern Europe, for which higher GDP than before is forecast (Figure 1). 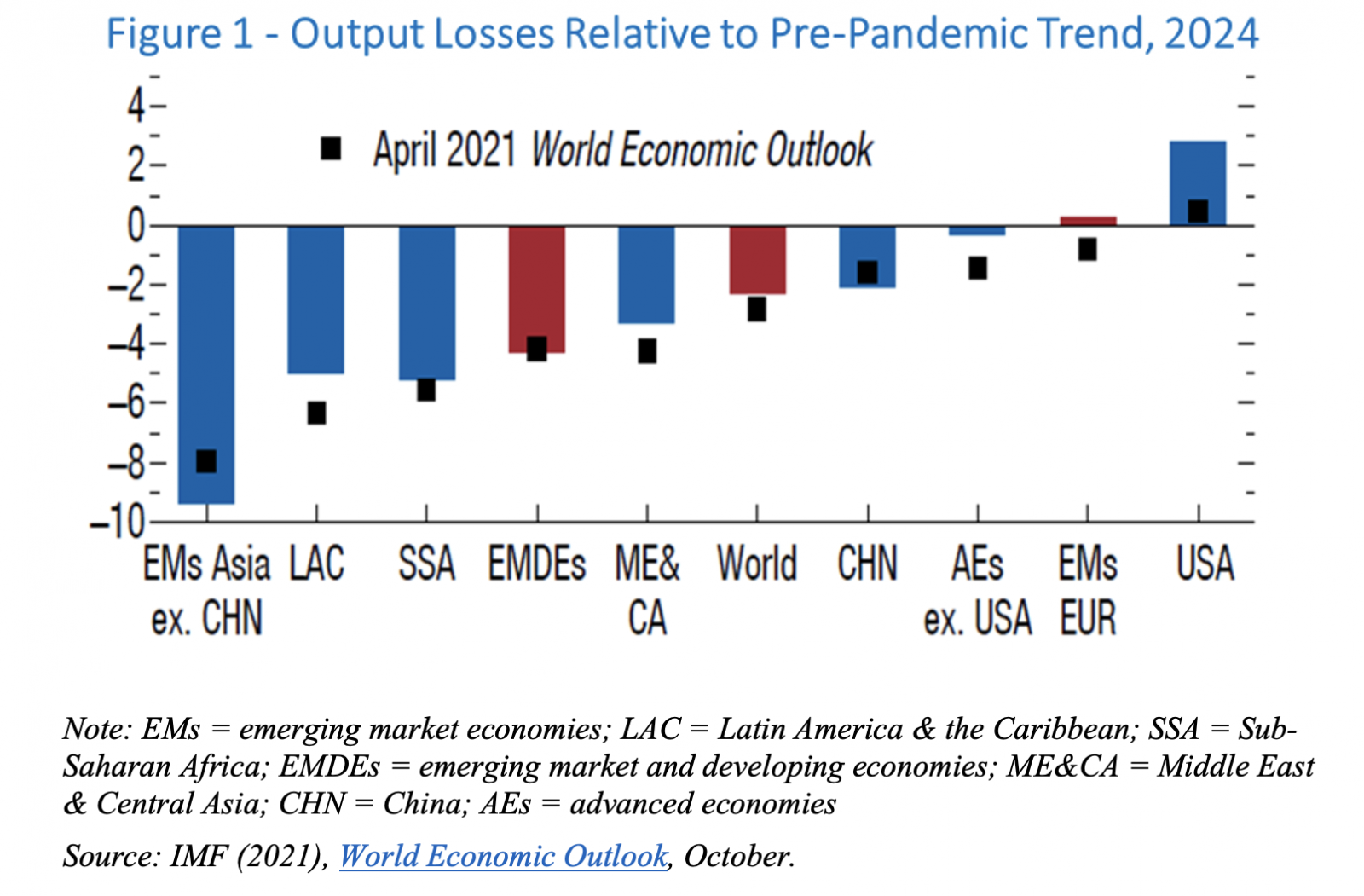 The divergence in economic recoveries is also manifested in labor markets and in the levels of utilization of productive capacity. The IMF projects higher job losses relative to pre-pandemic trends through 2024 in emerging and developing economies.

It is necessary to distinguish, on the one hand, the permanent output loss resulting from the pandemic and, on the other, any possible consequences of the pandemic for future GDP trajectories. Comparing previously predicted and actual trajectories with what happened during the pandemic shows a definite loss. Even if one hypothetically supposes an exact return of the economy to the point where it would be according to the original trajectory, with a return to the growth rate prior to the pandemic, all the GDP not generated during the crisis would be permanently lost.

This is different from crises associated with industrial or financial cycles common in history because, in those cases, in general, some period of above normal or trend growth will have occurred previously. In the pandemic there has been only the loss side.

There is also a high probability that ‘scarring’ prevents a complete return to levels of GDP that were projected before the pandemic. In the case of a recovery in the form of an ‘inverted square root’ (Figure 2 – see Canuto (2020)), the permanent loss of GDP would include the differences between GDP levels projected before and after, even assuming a return to the potential growth rate prior to the pandemic.

As discussed previously, the pandemic is causing scarring in labor markets. Long-term unemployment leads to skills erosion. The quality and quantity of hours in human capital formation is also being negatively impacted.

The pandemic will leave other scars, as discussed by Diggle and Bartholomew (2021). Financial support from the public sector has made it possible for ‘zombie’ companies to survive—firms incapable of generating returns and meeting debt services in the ‘new normal’ conditions. Public support prevented the death of otherwise viable companies, but the side effect of maintaining zombies is, in turn, an impediment to the improved reallocation of resources.

Experiences with strong negative shocks also have persistent impacts on the beliefs and moods of companies and businesses, leading them to greater levels of risk aversion in financial and budgetary decisions. It is not by chance that, historically, savings go up during pandemics.

On the other hand, the pandemic has had a positive productivity shock in sectors where there was some business reluctance to accelerate digitization and automation, as revealed in some recent surveys of corporate managers. Certainly, the challenges in terms of the need to retrain the workforce have also increased.

The IMF WEO report included an upgrade to the medium-term scenario for the U.S. economy, which may be taken as including a favorable assessment of the effects of the Biden administration's fiscal program, for which the feasibility of political approval was certainly facilitated by the pandemic crisis. This arguably can be included among the ‘positive shocks’ from the pandemic.

The scars, with different depths in different countries, will limit the extent to which the recovery will bring economies closer to their pre-pandemic trajectories. The shorter the recovery, the greater the permanent loss of GDP arising from differences between projected GDP before and after. This is bad news in particular for emerging and developing economies that, according to the IMF report, are on the downside of the “divergence of recoveries”.

What about the growth trends after the pandemic, with scarring effects taken into account? Is there any reason to expect growth to change up or down as a lasting consequence of the pandemic?

Here, there is a danger that national economic policies will focus more on risk prevention and lead to a retreat from the productive integration across borders that marked globalization in the decades prior to the global financial crisis. This integration was already subject to pressure in the opposite direction before the pandemic. The primacy of efficiency and cost minimization could give way to security against the risk of shocks and supply chain resilience. The supply disruptions that have marked the current moment of recovery from the crisis could be used as a justification for this.

It remains to be seen how far the demarcation lines of what will be considered ‘strategic’ by different countries will be extended. But moving towards closing of markets tends to negatively affect the future evolution of productivity. And one cannot lose sight of the exuberant result that accompanied globalization in terms of global poverty reduction and less inequality between national per-capita incomes.

One must also consider as a possible positive consequence of the pandemic the strengthening—apparently the case in many countries—of domestic political support for the pursuit of sustainable and inclusive growth. For now, however, there are permanent losses of GDP.