The pandemic is accelerating history, in the sense that it is leading to the speeding up of some recent trends. In the case of globalization, the pandemic will not reverse it, but it will reshape it. Here we take a bird’s eye view of global trade during the pandemic, relate it to previous trends, and guess how global value chain managers and government trade policymakers are likely to react.

A Bird’s Eye View of Global Trade during the Pandemic

World trade took a deep dive during the first months of the global pandemic. After all, mandatory or recommended lockdowns and travel restrictions disrupted economic activities, before being scaled back in the second half of the year.

The latest WTO trade forecast (Oct. 6, 2020) pointed to a 9.2% drop in the volume of world merchandise trade in 2020, followed by a 7.2% increase in 2021. Merchandise trade will still remain well below its previous trajectory (Figure 1). 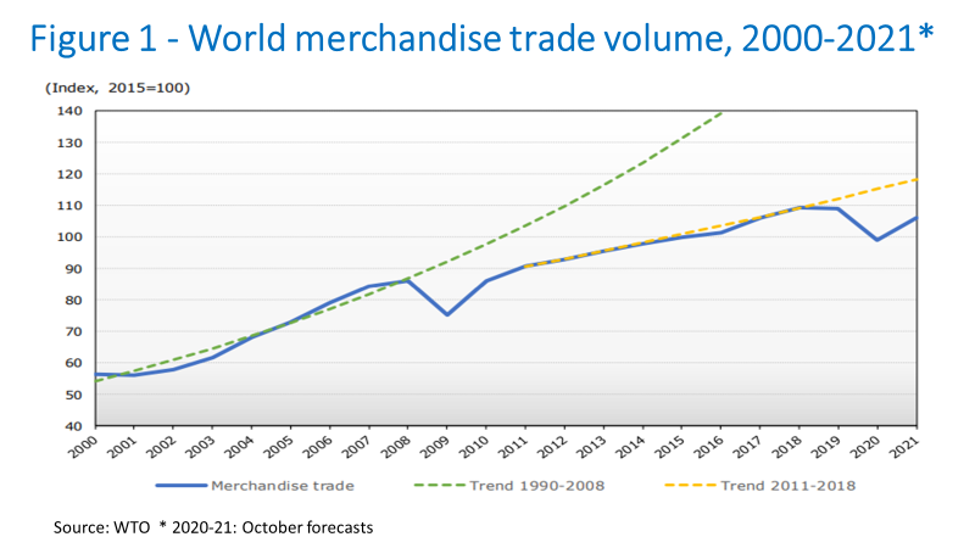 Commercial services trade declined even more than merchandise trade, dropping 30% in the second quarter of 2020 and 18% for the year to September. This is unlike previous global recessions when merchandise trade bore the brunt of the negative impact. Indeed, this crisis is different. The unusually large drop in commercial services trade is likely related to social distancing measures and travel restrictions, which curb the delivery of services that involve physical proximity to users. Less spending on services, particularly in travel-related sectors, may have also left consumers with unspent income that could be redirected toward the purchase of goods. This may partly explain the relatively small decline in merchandise trade in the first half of 2020.

Countries in all regions have been impacted by the trade slump but to different degrees. Besides China as a first-in-first-out case, trade reduction in Asia has been smaller than elsewhere. Countercyclical fiscal and monetary policies in other regions have helped them sustain relatively high levels of consumption of merchandises during the crisis, with Asian countries being major producers and exporters of goods for which demand has remained strong during the pandemic, including electronics and medical supplies.

In April 2020, we approached the “perfect storm” that COVID-19 brought to developing economies. Besides the COVID-19 shock, they faced other shocks from abroad (finance, remittances, tourism, and commodities). The March 2020 financial shock was partially offset because of policies adopted by central banks in advanced and emerging market economies. Tourism dropped substantially, but remittances less so.

In the case of primary commodities, there was a mixed picture, with prices—other than metals—falling by different degrees in the second quarter of 2020. The price of fuels declined most, around 50% year-on-year, and has recovered partially since then. Food prices were down 3% over the same period, while prices for agricultural raw materials dropped 13%. In contrast, prices for metals rose 6% in the same quarter (Figure 2). 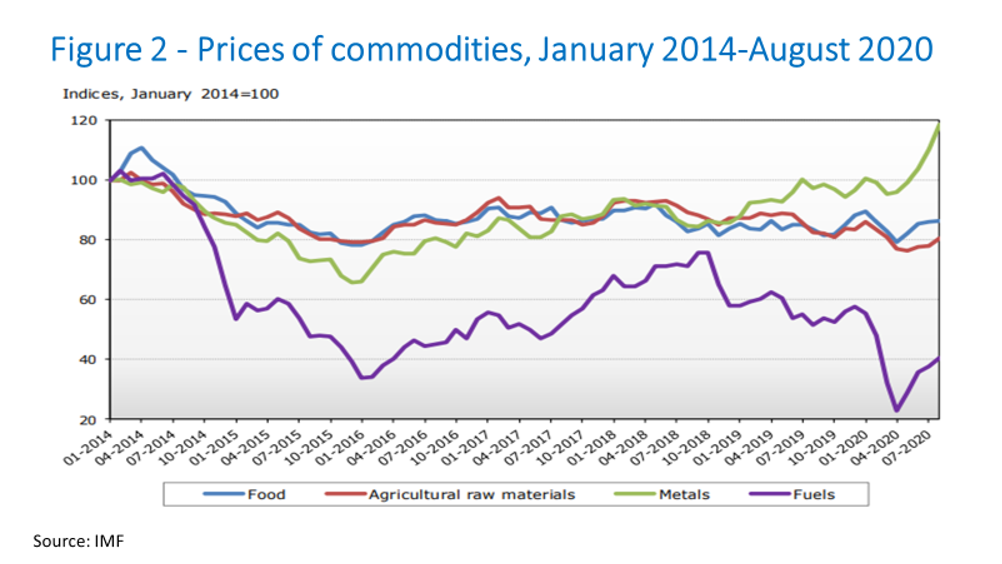 With the partial reopening of economies in the second half of the year, leading to higher levels of mobility and oil consumption, the price of fuel started to rise, partially recovering from the drop at the beginning of the pandemic. Strong price increases were recorded between May and August 2020 for food (5%), agricultural raw materials (5%), metals (19%), and fuels (40%).

Trade and GDP partially rebounded in the third quarter of 2020 in many countries, following the relaxation of social distancing measures. However, trade growth is expected to slow in the fourth quarter and beyond, as new waves of contamination have led to a partial return to—or maintenance of—confinement measures or behavior choice. The race between vaccines and COVID-19 is still on.

What does the trade shock look like compared to the trends prior to COVID-19? In fact, world trade volumes have lagged GDP growth since the 2000s, a trend reinforced after the onset of the global financial crisis (see here for long-term trends by the mid-2010s).

Some transitional—and therefore potentially reversible—factors behind this can be highlighted. The weak recovery of fixed investments in advanced economies after the global financial crisis (GFC) suppressed a major source of trade volume, given the higher-than-average cross-border exchanges that characterize fixed investment goods. However, some structural trends have also been at play.

The golden era of globalization 2.0, associated with the rise of global value chains, clearly peaked by 2008. Global trade stagnated as a share of GDP and foreign direct investment fell in the 2010s (Figure 3). 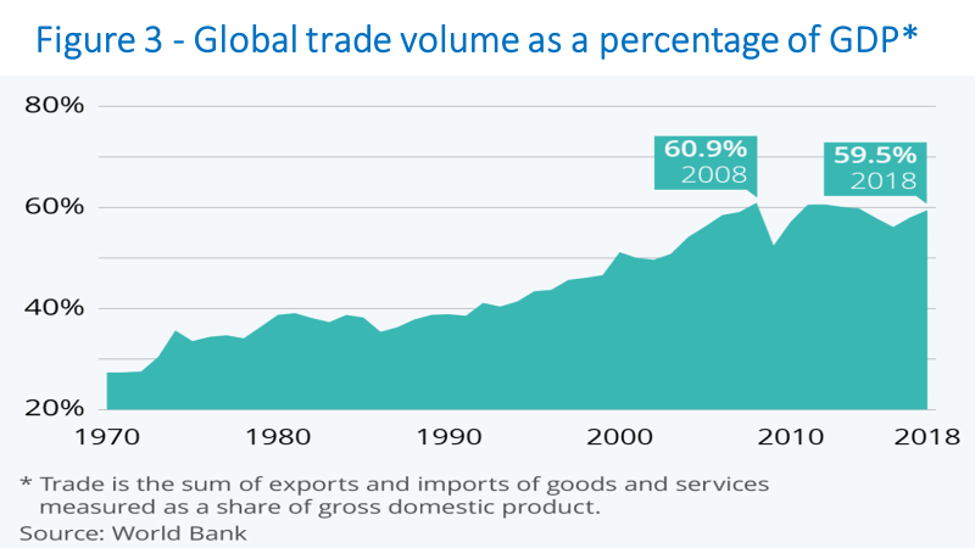 The golden era reflected the combination of two major events. First, trade opening measures integrated areas with cheap labor into global markets—China and others in Asia, but also Eastern Europe and Mexico. Second, technological breakthroughs in terms of transportation (containers, for instance), and information and communication technologies allowed a fragmentation of production processes and their geographical dispersion. Cost minimization could be achieved by spreading value chains globally and trading intermediate goods across borders.

After steadily increasing between the mid-1980s and the mid-2000s, trade elasticity to GDP eased off. The world’s exports-to-GDP ratio seems to have approached a plateau (or a ‘peak trade’). Since 2008, world trade has been rising slower than GDP at a ratio of around 0.8:1, leading to a slight fall in the share of exports in global GDP. Even if transitional post-GFC factors were partially reversed, the presence of a long-term trajectory of trade elasticity displaying a slowdown already prior to the recent pattern, would suggest no automatic return to the heyday.

Some structural trends can be pointed out. First, as manufacturing started to become more automated, advantages from locating production to where workers were cheapest started to shrink in some of the previously dispersed GVCs. This is neither a sectoral uniform nor immediate process, but overall, recent technological trends have pointed in that direction. Digitization has been sped up by COVID-19 and tends to provide an additional push.

In any case, the first major wave of vertical and spatial fragmentation of industrial production has completed, while services have not stepped up with the same intensity.

Furthermore, the major wave of trade-cum-structural-transformation has been followed by China’s rebalancing: climbing up the ladder in GVCs, while gradually lifting domestic consumption as a share of GDP and moving toward higher GDP shares for services. As China’s middle class has grown, it hasconsumed domestically more of what it produces. China’s share of world exports stopped rising in 2015 while its share of world imports has continued to grow.

The state of current technological trajectories, and rising shares of services throughout, would imply an anti-trade bias, given the still lower trade-propensity of services—with a few exceptions, such as tourism.

Additionally, rising trade-restrictive tax-cum-subsidy policy measures adopted in some key sectors by some countries may also have become more significant (Figure 4). In the 2010s, no major and deeper multilateral trade deals were implemented, the United Kingdom voted to leave the European Union, and the United States renegotiated existing trade treaties and relationships. 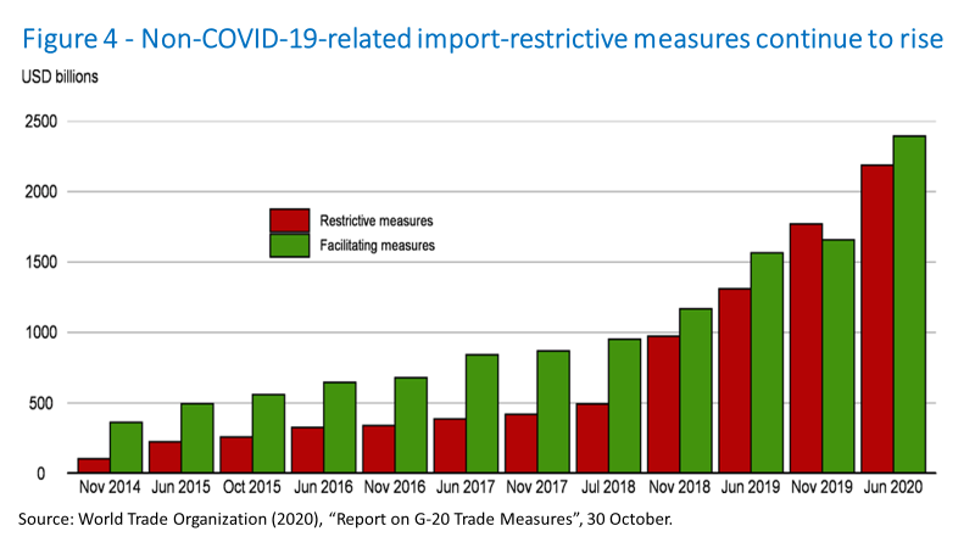 The COVID-19 crisis has brought an additional series of—temporary or not—trade restrictions. Many countries reacted in the early phase of the pandemic by tightening trade restrictions on exports of some medical and food products. By mid-April 2020, more than 80 countries had imposed export bans on medical devices and personal protective equipment used to curb the spread of COVID-19.

It is true that Figure 4 also shows some progress has been made in trade-facilitating measures easing restraints on international trade, as governments perceive the advantages of relying on foreign supply and demand as a complement, rather than counting on self-reliance. There was also the trade pact agreed in November between members of the Regional Comprehensive Economic Partnership (RCEP)—China, Japan, Korea, Australia, the ASEAN countries, and New Zealand. RCEP reduces tariffs on goods, expands market access for some services, and unifies rules of origin within the bloc. However, some of the distortionary barriers to trade introduced around the world over the past two years are still in place.

So, how might disruptions and shortages for some essential products affect the views of GVC managers and governments? There has been a revival of discussions about unforeseen, or underestimated, potential costs and risks of the international fragmentation of production. On the one hand, there are claims that trade dependency should be diminished, including by repatriating production, as a potential way of reducing risk. On the other, such retrenchment of trade would also create substantial efficiency costs, if it goes beyond what we described as structural factors underlying the evolution of global trade prior to the pandemic.

As happened in the tsunami-related events earlier in the 2010s, severe supply disruptions during the pandemic for everything from auto parts and consumer electronics to protective equipment have highlighted the existence of risks from concentrating too much production and sourcing in a small number of distant low-cost locations, and from overreliance on just-in-time inventory management. Rising tariffs, restrictions on market access, and other manifestations of geopolitical frictions may also lead some companies to revisit their supply chains.

In some cases, it might be decided that it pays to adopt more regional, ‘multilocal’ sourcing and manufacturing footprints, while keeping larger ‘safety stocks’ in inventory—even if these options entail somewhat higher costs.

The types of change will vary by industrial sector, as firms will have to consider tradeoffs between resilience and efficiency/costs. There is the previous trend that we alluded to in some segments toward locating production closer to customers, especially when the adoption of advanced Industry 4.0 manufacturing systems offsets higher labor costs. Medical equipment, biopharmaceutical products, semiconductors, and consumer electronics, for instance, are likely candidates to also be subject to geopolitical and government pressures. Ultimately the consequence of COVID-19 will be a greater weight given to those considerations.

Governments are also likely to put greater emphasis on domestic production, particularly of medical supplies and equipment, to reduce the risk of future supply shocks. Germany has expressed interest in localizing more supply chains, for example, and South Korea is exploring measures to encourage reshoring of manufacturing. This will not necessarily translate into full neglect of the broader gains from globalization, but it will selectively reinforce a search for greater self-reliance. The pandemic is prompting some governments to place further controls on trade in medical and agricultural goods.

Given the revealed costs—failures—of unilateral trade policies in the style followed by President Trump in the U.S., they are not likely to return when President-elect Biden takes office. But there may be plurilateral efforts to broaden the agenda of trade restrictions as a quid-pro-quo in negotiations about rules and standards.

On the technology front, a potential decoupling of the U.S. and Chinese sectors—which could make devices and IT systems in both markets no longer interoperable—might have further repercussions. China has signaled that it is searching for more self-reliance by talking about ‘dual circulation’ and ensuring greater diversity of sources of commodity imports. Again, the COVID-19 crisis did not create these frictions, but it has emphasized and reinforced them.

The future of trade is also being redefined in other ways. The pandemic has had a positive spillover effect on the climate change agenda. ‘Green recovery’ is the catchphrase. For example, as part of its European Green Deal strategy to slash greenhouse gas emissions, the European Commission is considering imposing a carbon tax on imports. This tax could redefine global competitiveness in a range of industries, particularly if the U.S. follows suit.

By intensifying geopolitical and economic forces already at work, the pandemic’s disruptive impact on international trade will leave a lasting mark. The pandemic is accelerating history, i.e. some recent trends are being sped up. The pandemic will not reverse globalization, but it will reshape it.