In a previous article, we highlighted how developing economies have faced simultaneous shocks from their external environment, as pandemic and recession curves have unfolded abroad (Canuto, 2020a). In addition to financial shocks, there have been declines in remittances, tourism receipts, and commodity prices (Canuto, 2020b). The combination of these shocks with the hardships related to flattening domestic infection curves has configured what we have called a ‘perfect storm’ for developing countries, brought by COVID-19 (Canuto, 2020c).

Recent World Bank and United Nations World Tourism Organization reports have given us a view of how serious these shocks have been. We assess here the falls in remittances, tourism receipts, and commodity prices, particularly in oil markets.

On April 22, the World Bank (2020a) published its Migration and Development Brief 32. The World Bank estimates that in 2019 there were 272 million international migrants—including 26 million refugees.

Foreign workers are often the first to lose their jobs in times of crisis and remittance flows around the world sent by migrants to their home countries are forecast to shrink by more than US$100 billion this year. The global economic lockdown, which has provoked steep job losses across the world, is expected to lead to a 20% decline in remittance flows to low- and middle-income nations. That equals a fall from a record US$554 billion last year to US$445 billion in 2020.

Last year, remittances amounted to about 8.9% of GDP in poorer countries. For the first time, they overtook foreign direct investment (FDI) as a source of money inflows to low- and middle-income countries (Figure 1). FDI is expected to decline by even more than remittances, reflecting local recessions and disruption of international trade. The World Bank report estimates that FDI into low- and middle-income countries could fall by more than 35%. Private portfolio flows through stock and bond markets could shrink by over 80%, while official development assistance (ODA) will maintain its steady evolution. 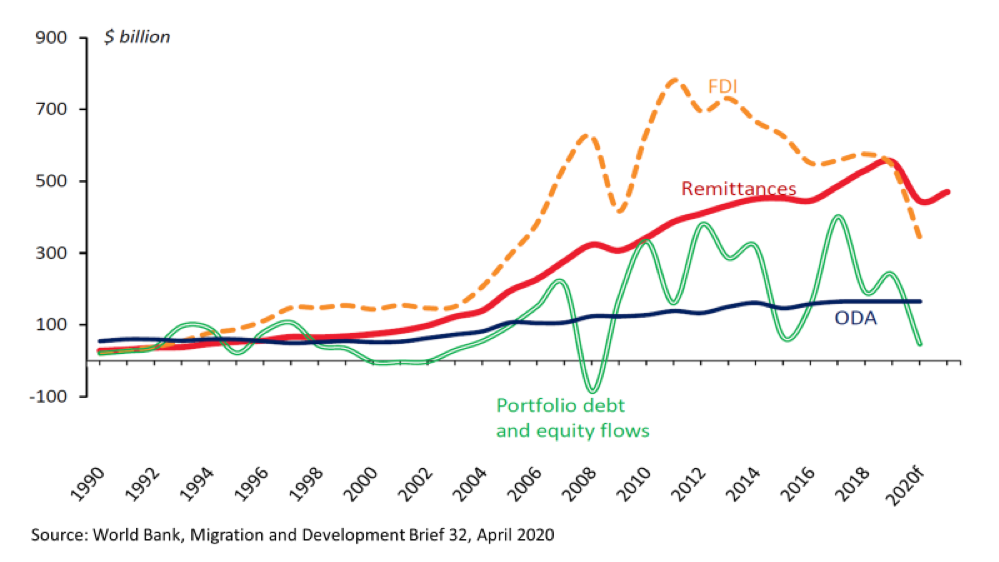 Among remittance-dependent countries, vulnerable to the ongoing decline, there are fragile states including Somalia, Haiti, and South Sudan, as well as small island nations such as Tonga, with remittances accounting for more than a third of GDP in some countries. Larger countries including India, Pakistan, Egypt, Nigeria, Mexico, and the Philippines, will also be hit because remittances have become a major source of external financing for them.

Migrant remittances are a fundamental source of income of poor households in many countries and the drop in flows this year will increase poverty. Remittances to Europe and central Asia are expected to fall most, crashing about 28% this year, while remittances to sub-Saharan Africa are forecast to diminish 23.1%. But all regions will face steep declines. 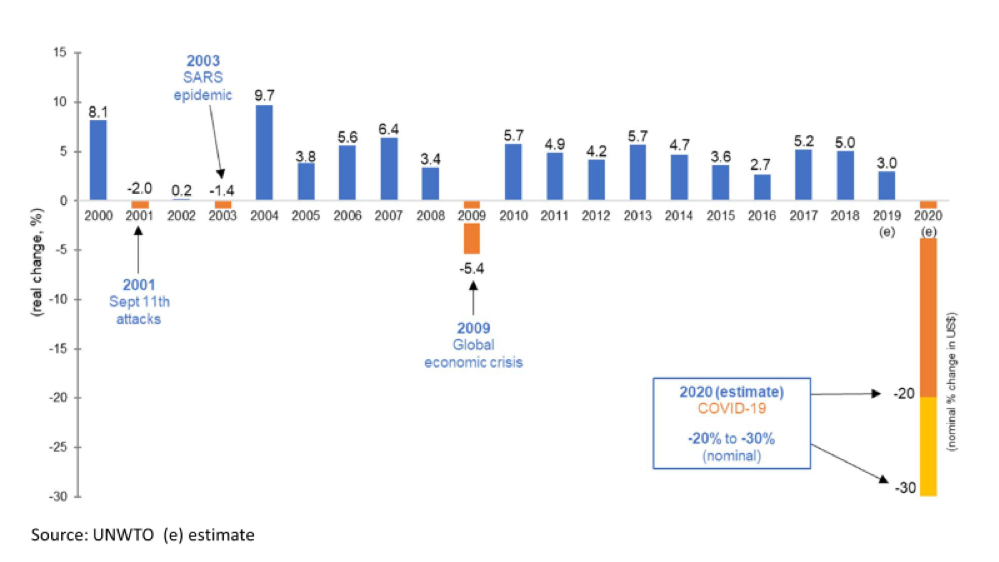 The World Bank (2020b)’s April Commodity Markets Outlook pictured how the global economic shock of the pandemic has driven most commodity prices down and is expected to result in substantially lower prices over 2020. Because of the halt in economic activities, the world’s commodity markets are likely to continue to be downbeat for months to come. Commodity-dependent emerging market and developing economies will be among the most vulnerable to the economic impacts of the pandemic.

Energy is most affected, and agriculture least. Most metal prices fell in the first quarter of 2020, reflecting the collapse in global industrial demand because of the COVID-19 pandemic. Although average declines in metals prices are—for now, at least—less severe than in the global financial crisis, the sudden economic stops have taken a toll on industrial commodities such as copper and zinc, and metal prices overall are expected to fall this year. The deceleration of economic growth in China—which accounts for half of global metal demand—has weighed on industrial metal prices.

Most food commodity prices have declined in response to mitigation measures to contain the spread of COVID-19, even though part of that price decline can be attributed to the previous record production for some grains, and favorable weather conditions in key producing regions. Rice prices are the only major exception, as they rose after announcements of export restrictions by some East Asian producers.

The greatest impact of the outbreak of COVID-19 has been on the crude oil market, as two-thirds of oil is used for transport. According to the World Bank report, because of travel restrictions and declining demand, crude oil demand is expected to be almost 10% lower this year than in 2019. That will be more than twice as much as any previous fall (Figure 3). 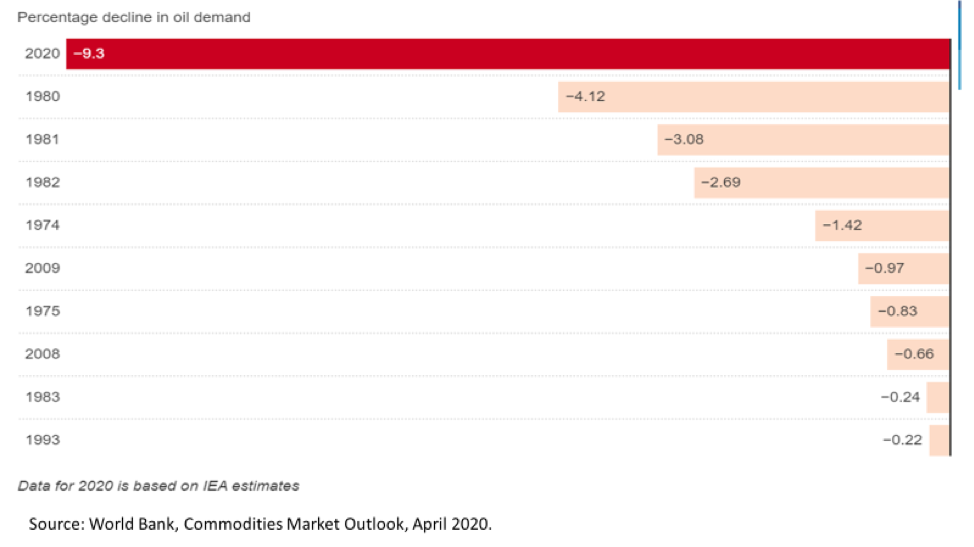 Crude oil prices are forecast to average US$35 a barrel in 2020, reflecting the unprecedented collapse in oil demand. Brent crude oil prices have declined 70% from their January peak. The large production cut by OPEC and other oil producers failed to lift prices in April. Natural rubber and platinum are also heavily used by the transportation industry, and their prices have tumbled.

All crude oil benchmarks have seen sharp falls, with some briefly dropping to negative levels—as we saw on April 20, the day buyers were paid to accept oil! New York Mercantile Exchange (NYMEX) West Texas Intermediate (WTI) crude oil front-month futures prices fell below zero dollars per barrel—at one point, trading at minus $40.32 per barrel—and remained below zero for part of the following trading day. It was the first time the price for the WTI futures contract fell below zero since trading began in 1983 (Figure 4, obtained from Richter, 2020).

Figure 4: The day you were paid to buy oil 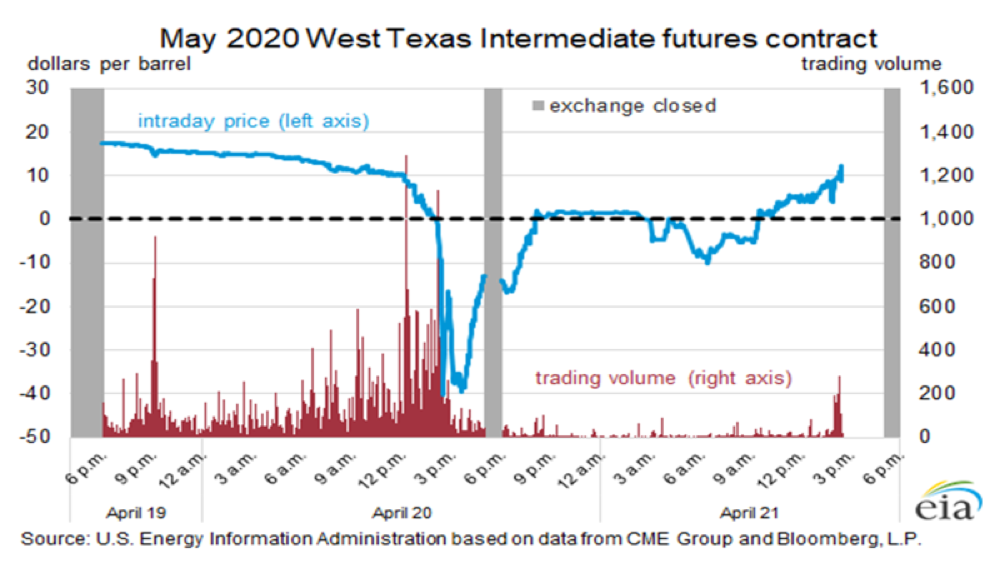 The WTI front-month futures contract was for May 2020 delivery, and contracts were set to expire on April 21, 2020. Market participants that hold WTI futures contracts to expiration must take physical delivery of the crude oil in Cushing, Oklahoma. As a result of the extreme demand shock, excess imported and domestically-produced crude oil has been placed into storage. The increased demand for storage has placed significant upward pressure on crude-oil storage costs.

The inability of some market participants to take physical delivery meant they had to settle the May 2020 WTI contract financially by selling the contract to another market participant. As a result, owners of the May 2020 WTI futures contract most likely had to sell at lower prices to exit their contracts and avoid physical settlement obligations. In this extreme market situation, several participants had to sell at negative prices—that is, pay the other party to take over the contract before expiration. That was obviously an extraordinary and temporary state of things, but it was an omen regarding how bad the picture remains in oil markets.

Given the magnitude of the multiple negative shocks that COVID-19 has brought to developing countries, including domestic coronavirus infection and recession curves, international support will be needed as developing country governments see their revenues drop, their access to financial markets dry up, and remittance-dependent poor households are impacted.