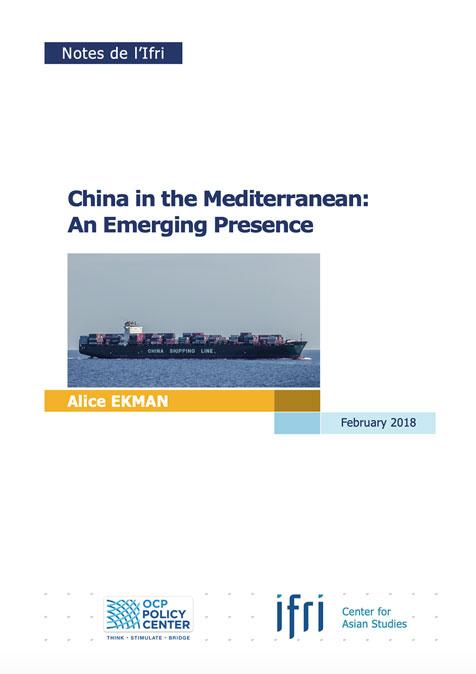 The Chinese presence in the Mediterranean is raising new questions among the diplomatic services of the Maghreb countries, as well as those of southern Europe. Indeed, over the past five years, China has been translating its national priorities with increasing activism in the Mediterranean. This activism can be summarised into three main areas: creating China-Southern Europe sectoral cooperation forums, investments in transport, energy and telecommunications infrastructure, and conducting military exercises in the Mediterranean as part of the overall development of the Chinese maritime presence.

Admittedly, it is primarily in the East China Sea and the South China Sea, an area which encompasses several of the country’s so-called “core” interests, where China is concentrating its efforts and developing a strategy in the face of a US presence that Beijing considers as illegitimate. At this stage, it is difficult to identify a Chinese strategy which would apply to the whole Mediterranean region, while the Chinese institutions involved in the decision-making process continue to approach the region by sub-areas (southern Europe, northern Africa, etc.) However, the deployment of the Chinese maritime presence in the
Mediterranean already raises a number of economic questions: the port of Piraeus is becoming a major entry point for Chinese products in Europe, and Chinese investments in transport infrastructure are starting to affect the business of other traditional port and logistics hubs in the region (such
as Rotterdam, Antwerp or Hamburg).

The question of the long-term geopolitical consequences of current Chinese investments in the Mediterranean is also raised. More and more Mediterranean countries – particularly those benefiting from vast Chinese investments – could be inclined to support Chinese positions in the region and beyond – in the South China Sea for example, or to develop civilian and military maritime cooperation with Beijing.

At the same time, the new sub-regional forums promoted by China could potentially call into question the political framework defended by the European Union in some Mediterranean countries. While it has beenconducting an all-out investment policy since the Euro crisis – increasing investments in the countries most affected by the crisis, such as Greece – China no longer hesitates to emphasise Brussels’ weaknesses and to position itself as an alternative market to these countries. In the coming
years, it cannot be ruled out that Beijing will seek to more actively promote an alternative development and governance model, by positioning itself as an example, as it already does for a growing number of countries facing economic difficulties in Africa, Latin America or Southeast Asia. In the face of this activism, which is supported – among other Chinese initiatives – by training programmes for civil servants and engineers, and a communication strategy in the local language, some countries around the Mediterranean will more than ever be faced with fundamental questions, related to the choice of their economic model and a fortiori the choice of their political system.