For the last 70 years, the social order in Europe has been based on the concept and practice of inter-generational solidarity. The welfare state granted every citizen, in addition to education and universal health services (and dependency care when needed in the most advanced welfare states), an old-age pension, which ensures that older generations do not suffer a huge income loss when retiring from work and are protected against insecurity. Population aging means that now, according to official statistics, over one quarter of EU residents—26.5% or almost 120 million people—receive some type of pension, old-age pensions in three-quarters of cases.

This pension system—which in 2018 already absorbed close to 12.7% of EU GDP on average—is not funded by past social contributions paid in by workers going into retirement, but by the social contributions of current, younger workers (a pay-as-you-go system) and general tax revenues. And it is based on the assumption that the working age population can fund it through their employment-generated social contributions. This social contract has suffered some attacks since the 1980s and the spreading of neoliberal economic policies, but by and large, a basic social consensus has been maintained to maintain the purchasing power of pensioners and increase pensions at or over the inflation rate, whether during economic good times or bad times. During the Great Recession of 2008-2013 for example, in particular in Mediterranean European countries including Greece, Italy and Spain, old-age pensions became a sort of insurance for families. The grandpas and grandmas often economically sustained younger family members who had lost their jobs.

The experience of the Great Recession and the 2020 COVID-19 employment crisis has exposed the pressing need to rewrite the European social contract to incorporate another kind of inter-generational solidarity. For the first time since the Industrial Revolution, in the mid-nineteenth century, the generation entering adult life in the last decade no longer has the prospect of living better than their parents, even if they are probably the best-trained generation ever in terms of investment in education. The COVID-19 crisis has highlighted once again the structural precariousness of youth employment in Europe and the risk of inflicting lasting damage on their prospects of joining the labor market. According to Eurostat figures shown in the figure, in November 2020 unemployment rates for young people (under 25) in the EU, which had gone under 15% in the first months of 2020, jumped back to close to 18% on average (3.171 million young persons under 25). In European Mediterranean and in some Baltic countries the rates were substantially higher: 40.9% in Spain, close to 35% in Greece, 29.5% in Italy, 23.3% in Portugal, 28.4% in Lithuania, and close to 23% in Estonia. This means that more of a third of the improvement in youth employment achieved since the peak of the employment crisis in 2013 has been swept away by the pandemic.

This risk of a ‘lost generation’ is not only morally unsustainable, but also a systemic violation of the fundamental right to work acknowledged in international law, most notably in Articles 6, 7 and 8 of the International Covenant on Economic, Social and Cultural Rights of the United Nations. It is also dysfunctional for the system. Young people aged 15 to 29 make up a lower share of EU population than those older than 65 (17% of young people versus 20% of old people, around 76 million young people), but as the unemployment figures in the wake of the pandemic demonstrate, the young are highly vulnerable to the ups and downs of economic activity. And it is on them and their employment and social contributions that the future of the welfare state depends, in particular for the pensions of the current baby-boomers, the largest generation in the history of Europe, who are now aged from their mid-50s to mid-70s.

The European Youth Guarantee, adopted by the European Union in 2013 as the main initiative to cope with youth unemployment in Europe, already recognizes this approach in principle. Since 2014, it has spent €9 billion throughout Europe to deliver on the “commitment by all Member States to ensure that all young people under the age of 25 years receive a good quality offer of employment, continued education, apprenticeship or traineeship within a period of four months of becoming unemployed or leaving formal education”. But the European Youth Guarantee has remained largely a labor market policy intervention[1], and is far from being an unconditional right to work for young people in the same sense as universal healthcare or the right to education. This has to change. The Welfare State needs to add a fifth pillar besides education, healthcare, pensions and dependency care: youth (labor) insertion through employment. There is hardly any other reform more important for social cohesion and economic model transition in the old Europe and beyond. As youth employment has become a global challenge, and one of the main drivers of future economic, social and political developments[2], there are few more relevant topics for upcoming editions of the Policy Center for the New South’s Atlantic Dialogues Emerging Leaders (ADEL) programme[3]. 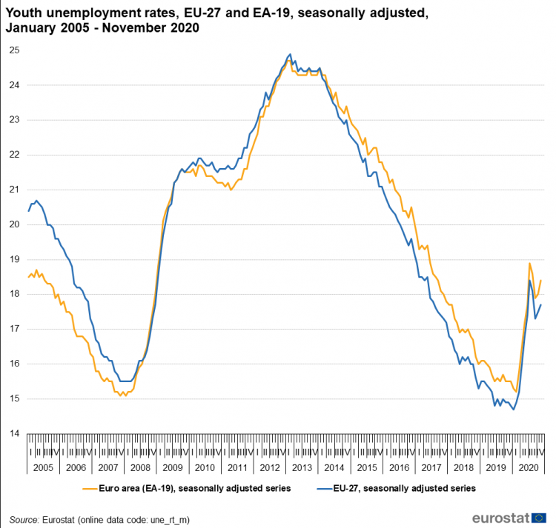 [1] See the “reinforced Youth Guarantee” launched by the European Commission in 2020 and an assessment of past achievements in the EU Youth Guarantee webpage, https://ec.europa.eu/social/main.jsp?catId=1079&langId=en, and a critical approach in Martín, I. (2020), “Struggling with the Youth Guarantee”, Youth Employment Magazine, https://youthemploymentmag.net/2019/11/30/perspectives-on-youth-employment-in-europe-n-1/.