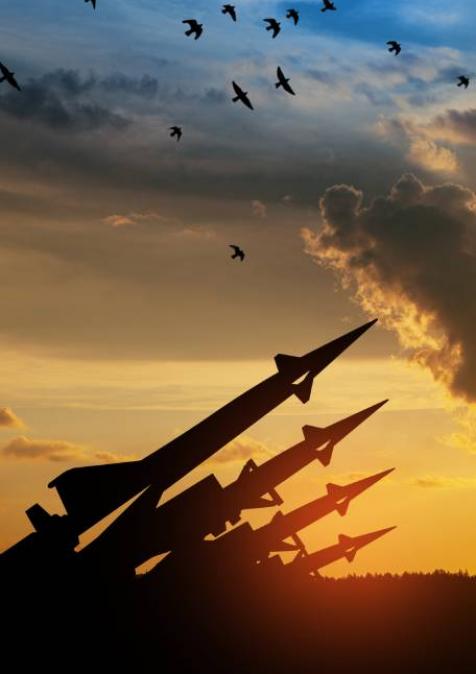 Share
The Threat of a Nuclear War
Authors
Helmut Sorge

October 22, 1962. One of those days in history to be forever part of destiny- warships of the Soviet Union confronting the US Navy off Cuba, an ally of Moscow, which convinced Fidel Castro to participate in a secret conspiracy: the stationing of strategic nuclear missiles on the island, located just 90 miles off the continental United States. Once discovered, US President John F. Kennedy ordered a naval quarantine on Moscow's ships. History would be repeated another time on a different continent.when Washington, August 1945, dropped two nuclear bombs on the Japanese cities of Nagasaki and Hiroshima, killing 129 000 and 226 000 people, only the US was a nuclear power. The Cold War was moving towards a nuclear confrontation- the apocalypse, the end of our world and civilization.

In the "Cuban Missile Crisis" 25500 warheads were controlled by Washington, and Moscow's stockpile was estimated at 3350. Six decades ago, horror and fear did not only grip seasoned generals and soldiers, confronted with nuclear devastation of unpredictable dimensions, the end of time perhaps, Armageddon, ignited off an island in the Caribbean sun.

Only years later, humanity learned how devilish our future had been shaping up during those days of October 1962, how close, indeed, we had to the point of no return, avoided the Rubicon, presumedly, by a man named Vassily Arkhipov, then a commander of the Soviet Submarine fleet. This officer, stationed on one of four Soviet submarines of Cuba, identified as "B-59", argued with h Submisarine captain and the Political officer, whether the one onboard nuclear torpedo should be fired onto a US target or not, a kind of warning shot, which could have escalated into a nuclear holocaust. Apparently, Arkhipov pulled rank and ordered: no provocation, no escalation.

Now, where is such a cool, reflective Russian leader, if we need him? A Arkhipov  and not a Putin, or Medvedev,  a former president and prime minister, now deputy Chairman  of the National Security Council, who fabulized about a Third World War, the use of nuclear might to scare the enemy off, NATO in particular, warning ("Yahoo", May 17, 2022)as Kateryna Tyschenko reports, "that pumping  by Nato countries  of weapons  into the Ukraine was increasing the likelihood  of full scale nuclear war." In a speech at the "St. Petersburg International Economic Forum", (Ukrininform.net, June 17, 2022) Putin declared: "We aren't threatening  anyone.

But everyone should be aware that we have. And what we will use if required to protect our sovereignty." In the early days of the invasion, the so-called "special military operation", Putin evoked his nuclear threat, warning that western intervention would reap "consequences you have never seen." In its most recent yearbook, the "Stockholm International Peace Research Institute" ( SIPRI) ,(June 13, 2022), revealed that  Russia (in January , 2022) deployed  1588 warheads and controlled an estimated 5977 weapons in its stockpile. Of the total global inventory, an estimated 12705 nuclear warheads at the beginning of 2022), revealed SIPRI, 9440 were in military stockpiles for potential use. Of those an estimated 3732 warheads were deployed with missiles and aircraft, and around 2000-nearly all of which belonged to Russia or the US-were kept in a state of operational alert."

"NATO is now involved in what is, in essence, a full-fledged  proxy war against Russia", writes Alexander Hill, Professor of Military History at the Canadian University of Calgary, in "The Conversation" (May 9, 2022), particularly the United States-  provided Ukraine  with an array of different weapons , but "they are clearly  helping Ukraine  with other elements  of its war effort, including intelligence-some of which has been used  to target Russian generals ." Hill notes:" At the beginning of Russia's invasion Vladimir Putin reminded the West that Russian nuclear weapons were   put on "special combat readiness". Russia, insists the military expert, was "considering   their use, even though actually launching them was a remote possibility." The question though remains unanswered by military analysts and politicians:  in precisely what circumstances Russia might use nuclear weapons?

Author Eric Schlosser  insisted in "The Atlantic" ( June 20, 2022) that he had spoken for his think piece with a variety of national security experts  and former government officials  about the likelihood  of Russia using  nuclear weapons  against Ukraine ,the probable targets and the proper American response. "Although they disagreed on some issues, I heard the same point again and again: the risk of nuclear war is greater today than at any other time since the Cuban Missile Crisis". Hill explained: "Putin's intent was presumably to frighten Nato and discourage its intervention on behalf of Ukraine.

" Since then, notes the military historian in "The Conversation", "much has changed   and not for the better in the terms of the risk of nuclear war." He seems convinced: "Not since the Cuban Missile Crisis" in 1962, or nuclear tensions in the early 1980's, has the specter of potential nuclear war loomed so large in the future." Putin's frustration over Ukrainian reliance   and western support, argues the Canadian historian, is" clearly increasing- recent nuclear posturing  is evidence of that." The  nuclear threat  has been increasing  since February", noted Hill in May of this year, "even if the use of nuclear weapons probably isn't imminent." For the academic "recent Russian nuclear saber-rattling-such as the testing and deployment  of more advanced missiles or Russian TV segments showing the impact  of a nuclear attack  on the UK- is undoubtedly  cause for concern , but it doesn't make the use  of nuclear weapons significantly more likely in the short term."

When would the Russian feel forced to use the unimaginable, nuclear weapons? Hill: "If the war was to turn in Ukraine's favor and Ukrainian forces started not only to recapture swaths of territory in the east, but to threaten the separate regions and -Crimea.".Scott Sagan,  a co-director  of the "Center for International  Security and Cooperation" at "Stanford University", concedes  in The Atlantic" ( June 20, 2022) that if Russia  were to lose  major battles in the Donbas ,or if  a Ukrainian  counteroffensive  seemed on the verge  of a great victory, Putin might well  order the use  of a nuclear weapon  to obtain a surrender  or a ceasefire.

Eric Schlosser  suggests  in his "Atlantic" story , that several scenarios for a Russian nuclear strike were possible—"a detonation over the Black Sea, causing no casualties but demonstrating a resolve to cross the nuclear threshold and signaling  that worse may come; a decapitation  strike against the  Ukrainian leadership ,attempting to kill  President  Volodymyr Zelensky ,and his advisers  in their underground bunkers; a nuclear assault on a Ukrainian  military target,  perhaps an airbase  or a supply depot ;the destruction of a Ukrainian city, causing mass civilian casualties and creating terror to precipitate  a swift surrender-the same aims that motivated  the nuclear attacks on Hiroshima  and Nagasaki.". In response, argues Sagan in the "Atlantic", "depending on the amount of damage caused by the nuclear explosion, Washington should order "American conventional attacks on Russian forces in Ukraine, Russian ships in the Black Sea, or even military targets inside Russia, such as the bases from which the nuclear strike was launched."

Mary Glantz, State Department fellow and analyst of the "United States Institute of Peace", suggests that Washington has" a range of possible responses to a Russian use of weapons of mass destruction." Mrs Glantz proposes the use of conventional weapons to destroy Russian units responsible for the use of WMD's, whether those forces were in Russian or Ukrainian territory. 'The danger of such a response is that it would engage the US in direct military conflict with Russia", the expert warns. While such conflict would not automatically cross Russia's doctrinal threshold for a nuclear response (a threat to Russian nuclear command and control, or the existence of the Russian state), it could still risk escalation.

Informed estimates, writes Alexander Hill, suggest Russia has more than 1900 non-strategic or tactical nuclear weapons under control. Even the use of low yield tactical nuclear weapons by Russia, predicts historian  Hill, "would likely  provoke some sort of western response" Such a reaction would then increase  the likelihood of further escalation" May Glantz stated in a study, (published, may 25, 2022),  that in 1994 Ukraine became one of four countries that voluntarily relinquished their  nuclear  arsenal and joined  the Nuclear Non-Proliferation Treaty ( NPT).

In exchange the US, UK and the Russian Federation issued the "Budapest Memorandum" committing "to seek  immediate  UN Security  Council action to provide  assistance to Ukraine if Ukraine would become victim of an act of aggression or an object of a threat of aggression  in which nuclear weapons are used." Prior to the attack on Ukraine, notes author Schlosser, the five nations allowed to have nuclear weapons by  the Non  Proliferation  Treaty ,the US, UK, Russia, China and  France, had reached  agreement  that the use of such weapons  could be justified  only as a purely  defensive measure in response  to a nuclear or  large scale  conventional  attack.

In January 2022 those five nations issued a joint statement affirming Ronald Reagan's dictum that" a nuclear war must never be fought and can never be won." A month later, recalls Eric Schlosser, Russia violated norms  that had prevailed  under the NPT for more than  half a century—it invaded a country  that had given up nuclear weapons; threatened attacks against anyone  ,who tried to help that country ,and committed nuclear  terrorism by shelling  the Ukrainian  reactor complexes  at Chernobyl  and Zaporizhzhya.US President Joe Biden has made clear that any use of nuclear  weapon in Ukraine would be "completely unacceptable "and "entail severe consequences" -- his administration though   has remained publicly ambiguous  about what those consequences would be.