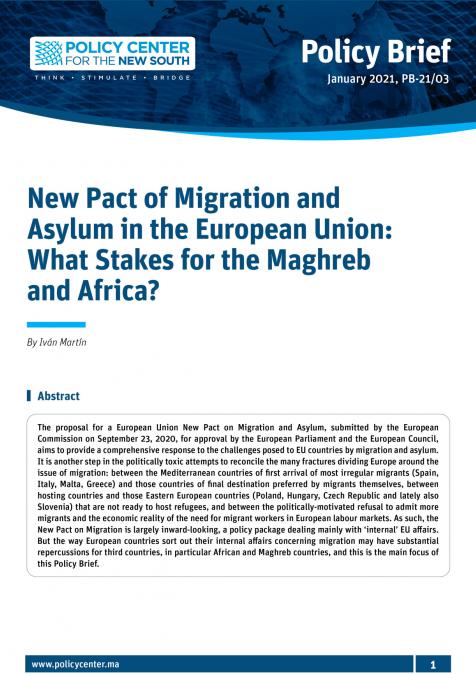 Download PDF
Share
New Pact of Migration and Asylum in the European Union: What Stakes for the Maghreb and Africa?
Authors
Iván Martín
Iván Martín

The proposal for a European Union New Pact on Migration and Asylum, submitted by the European Commission on September 23, 2020, for approval by the European Parliament and the European Council, aims to provide a comprehensive response to the challenges posed to EU countries by migration and asylum. It is another step in the politically toxic attempts to reconcile the many fractures dividing Europe around the issue of migration: between the Mediterranean countries of first arrival of most irregular migrants (Spain, Italy, Malta, Greece) and those countries of final destination preferred by migrants themselves, between hosting countries and those Eastern European countries (Poland, Hungary, Czech Republic and lately also Slovenia) that are not ready to host refugees, and between the politically-motivated refusal to admit more migrants and the economic reality of the need for migrant workers in European labour markets. As such, the New Pact on Migration is largely inward-looking, a policy package dealing mainly with ‘internal’ EU affairs. But the way European countries sort out their internal affairs concerning migration may have substantial repercussions for third countries, in particular African and Maghreb countries, and this is the main focus of this Policy Brief.