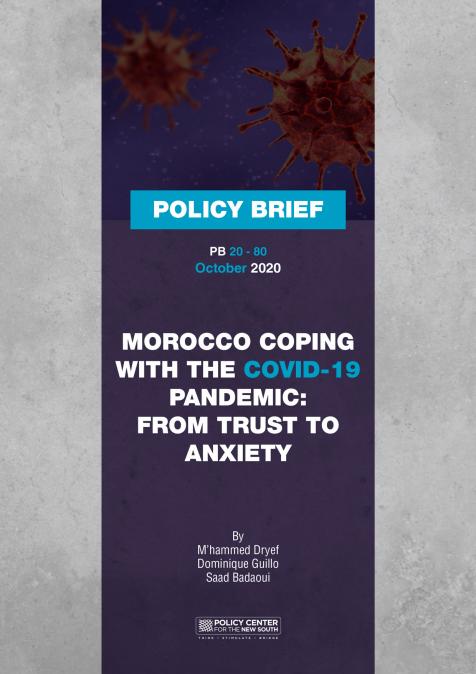 The data presented in this Policy Brief focus on the Moroccan population’s perception of the Covid-19 pandemic and the public policies designed to curb it. These data are derived from a survey conducted by the Policy Center for the New South based on 3 waves of public attitude surveys carried out by IPSOS Morocco in June, July and September 2020. This survey is part of the « Attitudes Towards Covid-19 » research program, conducted with a consortium of international academic partners (Sciences Po, Harvard Business School, Bocconi University, among others)1 . This program aims to compare data collected in 8 European countries, 7 African countries – including Morocco as well as Brazil, Canada, the United States, Australia and New Zealand2 .

At the beginning of the pandemic, Moroccans welcomed the intervention of His Majesty King Mohammed VI to mobilize the nation against the pandemic. They also welcomed the instructions given to the Royal Armed Forces (FAR) to support the health authorities with military health logistics, as well as the guidance extended to the government to support vulnerable populations and the national economy.

The 3 waves of surveys carried out under this study give indications on the period from the end of the lockdown (June) to the second half of September.The analysis of these 3 waves shows that, at the end of the lockdown, Moroccans expressed confidence in the management of the epidemic by the governance institutions (Police and Gendarmerie) and the (civil and military) medical corps and in the policies implemented to cope with it. In addition, Moroccans had relatively limited fears about the health future of the country, although they expressed concern about the economic repercussions of the pandemic. In the following period, (from June to the second half of September), confidence in the institutions remained strong. But, doubts about the effectiveness of the policy and, more broadly, feelings of concern about the future have grown over the weeks. A similar trend was observed in other countries, with the resurgence of a persisting pandemic which made its health, economic, psychological and social effects increasingly felt.