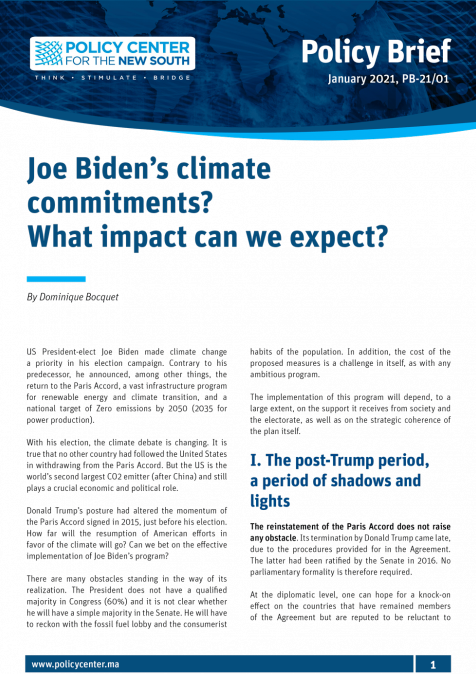 US President-elect Joe Biden made climate change a priority in his election campaign. Contrary to his predecessor, he announced, among other things, the return to the Paris Accord, a vast infrastructure program for renewable energy and climate transition, and a national target of Zero emissions by 2050 (2035 for power production).

With his election, the climate debate is changing. It is true that no other country had followed the United States in withdrawing from the Paris Accord. But the US is the world’s second largest CO2 emitter (after China) and still plays a crucial economic and political role.
Donald Trump’s posture had altered the momentum of the Paris Accord signed in 2015, just before his election. How far will the resumption of American efforts in favor of the climate will go? Can we bet on the effective implementation of Joe Biden’s program?
There are many obstacles standing in the way of its realization. The President does not have a qualified majority in Congress (60%) and it is not clear whether he will have a simple majority in the Senate. He will have to reckon with the fossil fuel lobby and the consumerist habits of the population. In addition, the cost of the proposed measures is a challenge in itself, as with any ambitious program.

The implementation of this program will depend, to a large extent, on the support it receives from society and the electorate, as well as on the strategic coherence of the plan itself.