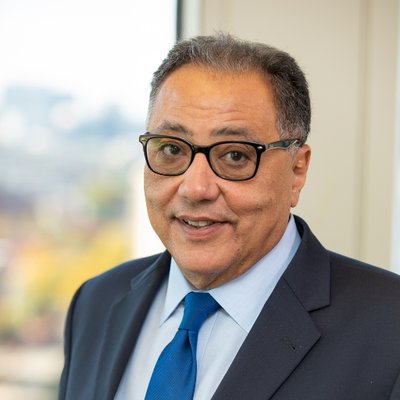 Hafez Ghanem – who holds a PhD in Economics from the University of California, Davis – is Senior Fellow at the Policy Center for the New South, a development expert with a large number of academic publications; and more than forty-year experience in policy analysis, project formulation and supervision, and management of multinational institutions.  He has worked in over 40 countries in Africa, Europe and Central Asia, Middle East and North Africa, and South East Asia.

Between 2015 and 2022 he was Vice President of the World Bank, initially responsible for the Middle East and North Africa, then for Sub-Saharan Africa and then East and Southern Africa.     In this latter capacity he was responsible for developing and implementing the World Bank’s strategy in the region, including a nearly $20 billion annual lending program and a large volume of analytical work and policy papers.

During 2012-15 he was a senior fellow in the Global Economy and Development program of the Brookings Institution.   His research focused on the Arab countries in transition: Egypt, Jordan, Libya, Morocco, Tunisia and Yemen.  He continues his connection with Brookings as a Nonresident Senior Fellow.

During the period 2007-12 he worked at the Food and Agriculture Organization of the United Nations (FAO) as the Assistant Director-General responsible for the Economic and Social Development Department.  This Department, with more than 300 employees from all over the world, is responsible for FAO’s analytical work on agricultural economics and food security, trade and markets, gender and equity, and statistics.

Prior to joining FAO, he spent twenty-four years on the staff of the World Bank where he started as a research economist and then senior economist in West Africa and later South Asia.  In 1995, he moved to Europe and Central Asia where he was Sector Leader for Public Economics and Trade Policy.  In 2000, he returned to Africa as Country Director for Madagascar, Comoros, Mauritius and Seychelles.  In 2004, he became Country Director for Nigeria where he led a multinational team of more than 100 professionals, managing the Bank’s loan portfolio of some USD 1.5 billion.  He has many publications in professional journals and was a member of the core team that produced the 1995 World Development Report.

He is fluent in Arabic, English and French, and has intermediate Italian and some knowledge of Russian.