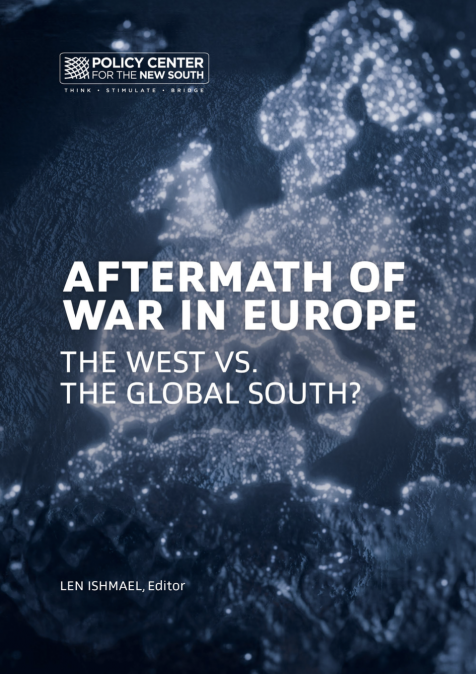 This publication provides an insight into the lens through which countries of the Global South view the current period of successive crises, brought about by an ongoing global pandemic and a war in Europe. It highlights how the combined weight of history, culture, and geography has shaped the Global South’s interests and is influencing its foreign policy stance during one of the most dangerous periods of Great-Power competition in recent times—one that could see the fracturing of the world into different blocs.

Russia’s invasion of Ukraine on February 24, 2022, and the Western sanctions imposed in retaliation, have unleashed a domino-like sequencing of effects and consequences, not only for the two countries at war, but for the world. The war has come on the heels of more than two years of a pandemic that has affected global supply chains and output, and has impacted the world’s poorest countries even more severely. The World Bank estimates that developing countries added at least 45% of new debt to already unsustainable burdens, in an effort to manage the health crisis and deal with its most egregious economic and social effects. Millions have been pushed back into poverty. Debt repayments, suspended for a short period at the height of the pandemic, resumed in 2022 with stark warnings from the International Monetary Fund (IMF) about the debt-distressed situation of several countries. Zambia and Mali have defaulted on their sovereign debts, so has Sri Lanka, for the first time in its history. Others are on the brink.

The consequences of default are significant. Default affects a country’s ability to access capital markets. It increases the cost of borrowing, undermines investor confidence, exerts downward pressure on the local currency and can lead to the roll back of years of working towards gains in the delivery of social goods and services. Egypt has devalued its currency as a precursor to its recent request for standby facilities from the IMF. This will impact prices, inflaming already heightened social tensions. Tunisia has reached preliminary agreement with the IMF for a $1.9 billion loan. Inflationary pressures, and soaring food and energy prices associated with the effects of the war, have exacerbated an ongoing crisis first precipitated by the COVID-19 pandemic. These two crises and their combined effects have dimmed, even further, prospects for global economic recovery, with no end in sight.

Russia’s invasion of Ukraine has united the western world more swiftly and robustly than expected, and has strengthened the resolve of the transatlantic partners to stay the course in a relationship that, even under the Biden Administration has proven to be challenging. There is a sense of fierce reaffirmation of the ideals that bind Atlantic partners to each other, to NATO, and to their allies. Yet there is also a sense that the world order in place since the Second World War is being upended, and trends that were emerging at the beginning of the pandemic have now coalesced and are accelerating.

Countries of the Global South and some others have mostly declined to implement Western sanctions against Russia. They represent more than half of the world’s population and their shares of global economic resources and output are significant, and growing. In this conflict they have adopted a neutral stance. Interests are intertwined and too complex. They seek an end to the war and yearn for conditions of stability to allow global economic recovery to take place, and issues of global governance to be addressed. The level of sanctions deployed against Russia is unprecedented in modern history, and many of these countries ponder a future in which seats at the table of global governance and rule-making shrink, rather than expand, reducing the options available to them. Such a world does not promote their interests and they are pursuing various modalities to secure the future they need and want. Deepening and enlarging distinctly non-Western alliances is one such option. This only enhances the view that a two-bloc world is in the making.

At the same time, the European Union’s (EU) drive to wean itself from Russian oil and gas, while promoting opportunities for greater exports from Africa and other countries of the Global South, raises awkward and vexing questions. So too does the EU’s renewed efforts to enact carbon taxes on the border of the single market—with significant implications for countries of the Global South. This not only raises new issues at the World Trade Organization (WTO), but its timing comes at the very moment when these countries need to trade their way out of poverty and relieve the burden of significant debt, which has accrued during the pandemic and the war. This publication frames the voices of the Global South and their pronouncement on the multiplicity of issues arising from this period of disruption and Great-Power rivalry. The very act of their neutrality and the deepening of alliances with ‘like-minded’ others is accelerating a period of change in the international structure. For all countries, for the West and the rest of the world, the stakes are high.