Emerging market and developing economies: Engine of the global economic growth despite some vulnerabilities1

After a long spell of slow growth post-crisis, the global economy’s recovery was mainly supported by the improvement of emerging markets and developing economies growth. However, this recovery is subject to wide-ranging uncertainties and is now in some danger. According to the IMF, the global economic growth is expected to fall to 3 % in 2019, the lowest level since 2008. This slowdown is estimated to be widespread, concerning both advanced economies as well as emerging markets and developing economies with an expected recovery starting from 2020.

Sub-Saharan Africa is expected to grow by 3.2% in 2019 and 3.6% in 20202, slightly higher than the global economic growth. Nonetheless, considering the demographic dynamics in SSA, growth remains insufficient to ensure convergence and reduce poverty. In addition, it is worth mentioning that disparities amid SSA countries are outrageous. In fact, growth is strong in non-resources countries reaching 6%, while it is low in resource intensive countries, 2.5%. Similarly, global turbulences and oil prices volatility weigh on the growth prospects of the MENAP countries.

Figure 1: Difference between EMDs and AEs in per capita Investment and GDP growth. 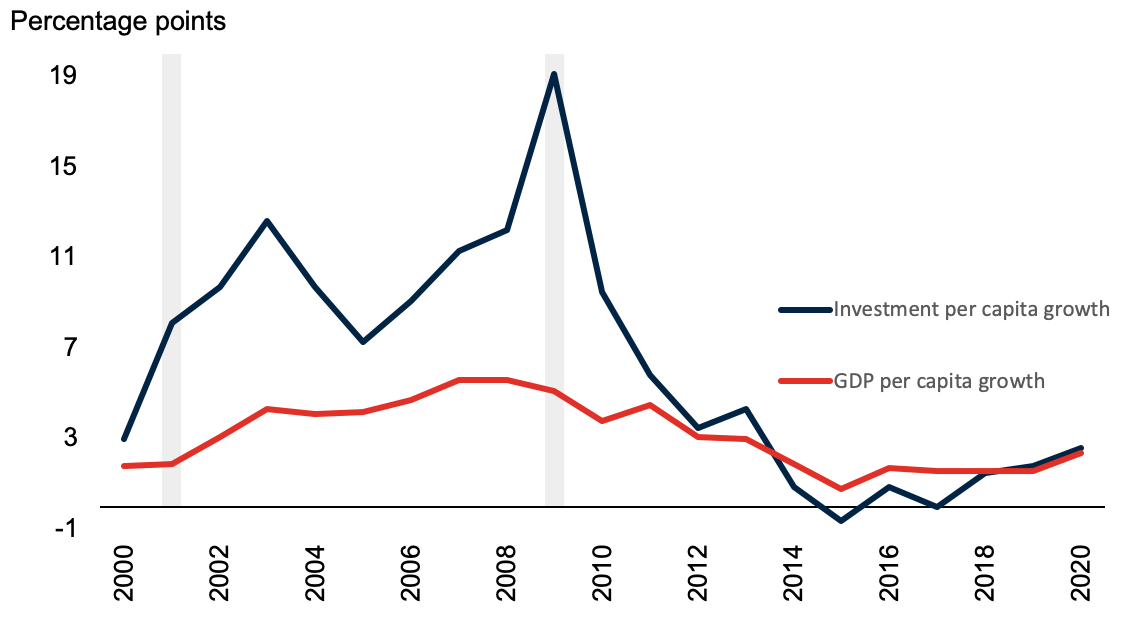 Global trade and geopolitical tensions, the broad based slowdown in the majority of advanced countries and the financial linkages are the key transmission channels of recessions to Emerging and developing countries. Furthermore, it should be highlighted that we are living in a time of uncertainty and turbulence where we see a global erosion of trust around the world (Tadjeddine et al. 2019). Several factors come into play and might delay the global economic recovery.

The rise of populism, the increasing level of individualism, escalating trade tensions, Brexit, the high level of inequality and polarization of wealth, climate change challenges as well as the uncertainty linked to the energy transition and the lack of transparency of actors with regard to the economic and social costs that it will generate.

The increasing level of inequalities within countries since 1980 is one of the huge challenges facing all world regions. Inequality in developing countries is usually higher than in advanced countries, whether measured as the share in total income of the top 1% or top 10% (Dadush and Saoudi, 2019). Furthermore, the bottom half of the population has not seen any improvement of their living standards. Consequently, inequality of income and opportunities have led to political inequalities which made the concept of democracy questionable even in developed countries (Stiglitz, 2013).

On another note, we observe a strong growth of external debt in major economies which can be related to loose monetary policies (Adrian and Natalucci, 2019). Maintaining low interest rates in the long run encourages the creation of a debt bubble whose collapse could lead to a new financial crisis as it was the case during the last economic and financial crisis of 2008. It is worth emphasizingthat, according to the IMF, the global debt has reached in 2017 a very high level of $184 trillion, the equivalent of 225 percent of GDP (IMFblog- 2019). This level of debt is 11 percentage points of GDP higher than it was in 2009. But the big question is whether this high level is sustainable or not? That is why it is important from a stability point of view to look deeper and see the global structure of debt.

Moreover, the lower yields, resulting from accommodative financial conditions, have reinforced financial risk-taking in non-financial corporate sector which in turn facilitated a rise in corporate debt burdens. Furthermore, low interest rates have spurred capital flows to emerging and frontier economies, facilitating further accumulation of external debt. Debt indicators (debt to Gross National Income and debt to export ratios) confirm that debt burdens have contributed to economic vulnerabilities in emerging market and developing economies. External debt stocks to exports ratios shifted from 64% in 2008 to 101% in 2018. At the end of 2018, excluding South Africa, the average debt-to-GNI and debt-to-export ratios in SSA were 32% and 127%, respectively; the comparable ratios for 2009 were 24% and 87%, respectively3. In 2018, countries in the MENA region recorded the fastest accumulation in external debt stock, on average 6%.

The rising corporate debt burdens, financial risk-taking and increasing reliance of emerging and frontier market economies on external borrowing constitute one of the main sources of the global financial vulnerabilities.

All these risks and uncertainties mentioned above can lead to world trade disorder and global economic disruption and will certainly impact both emerging and developing countries.

How to deal with future challenges?

It is highly important for all countries around the world to set up a more inclusive growth model that delivers for the people and for the planet. We should move away from the old growth models only focusing on ensuring that the markets are efficient (which is not the case).

The vulnerabilities hailing from corporate sector debt can be addressed through developing prudential tools for highly leveraged firms and widening the regulatory and the supervisory perimeter to include nonbank financial entities providing financial intermediation services to firms. Furthermore, in order to benefit from the benign external financing conditions, emerging and frontier markets’ financial decisions should rely on medium term debt management strategies, i.e. assessment of costs and risks and efficient allocation of borrowed funds.

Reform impetus in areas such as governance, domestic and external finance, trade, and labor and product markets could deliver sizable output gains in the medium term. It is always preferable to start with reforms that can have an impact and show tangible results in the short run in order to boost people’s confidence in the economy. In this regard, governments ought to think big and prioritize. As some structural reforms take time, it is better to start with reforms at the beginning of the government's mandate5. It should be highlighted that these reforms should take into account countries’ local specificities in order to increase the probability of succeeding.

Communication, transparency and consistency are the cornerstones that help restoring the trust in the economy. Politicians should start by explaining and discussing with citizens about their future policies and reforms so as to gain credibility. Public involvement in the decision making process make reforms more reliable and thus successful even when it comes to austerity actions. To ensure that, it is necessary to create a system based on meritocracy that encourages innovation and improves productivity through education and equal access to opportunities. Indeed, education can be a vital instrument to boost confidence in the economy. It can also be one of the best ways to prepare responsible, free and productive citizens with values who can play a major role in the development of their countries.

1 The aim of this blog is to shed light on the main challenges and risks facing the global economy based on IMF reports (October, 2019)

4 By debt to GDP we mean both public and private debts.