- Regardless of the extent to which individual central banks take action in each of the three areas, they can no longer ignore climate change.

Regardless of lingering skepticism about the extent to which human action is responsible for global warming, the fact is that the average global temperature at sea and on land has been rising since the 1970s, with a greater range of variations and extremes (Figure 1). 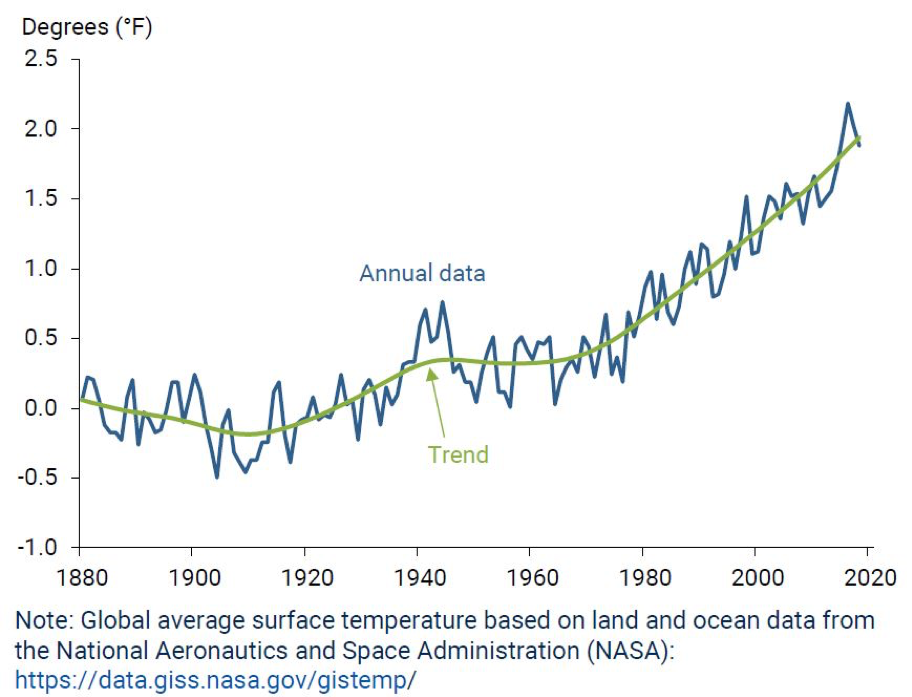 As a result of the rise in temperatures, extreme weather events have become more frequent. Figure 2 shows the global increase in natural catastrophes and the proportion of insured losses since 1980:

Source: Bolton et al,  The green swan - central banking and financial stability in the age of climate change, BIS, Jan. 2020 (data from MunichRe, The Natural Disasters of 2018 in Figures)

Although with different degrees of urgency and coverage, central banks are proposing to consider climate change issues as relevant to their functions. In December 2017, 50 central banks (not including the U.S. Federal Reserve) created the Network of Central Banks and Supervisors for Greening the Financial System (NGFS), a network for mutual consultation on environmental risk management practices and those associated with climate change. Christine Lagarde, president of the European Central Bank (ECB) since November 2019, has stated that climate change policies will be a “crucial mission” during her mandate.

There are three possible justifications for central banks to engage with the topic: risks to financial stability, the impact on growth and inflation, and the use of central banks’ firepower to mitigate climate change. The first – and most obvious – is the set of risks to financial stability potentially brought about by natural disasters. This is particularly the case for financial sectors including banking and insurance.

According to the Institute of International Finance (IIF) – Sustainable Finance in Focus. Climate change: a core financial stability risk, June 6, 2019 – more than US$ 2.5 trillion in global financial assets in 2016 were subject to some kind of risk derived from the impacts of climate change. As the first NGFS report, published in 2019, noted:

“Climate-related risks are a source of financial risk and it therefore falls squarely within the mandates of central banks and supervisors to ensure the financial system is resilient to these risks.”

It is necessary to distinguish between two types of financial risk in this context. First, there are physical risks, that is, threats to the value of assets resulting from climate shocks – the most intense and frequent extreme weather events including floods, droughts, hurricanes and other types of storms – and from trends including rising sea levels, rising temperatures, and melting polar ice caps. Such physical risks include potential direct losses on assets, and also their indirect impacts on global value chains and repair costs.

There are also the financial risks arising from the climate change mitigation strategies that may be implemented, called “transition risks”. The move to a low-carbon economy will change the allocation of resources, the technologies in use and the construction of infrastructure. Consequently, the strategies adopted will have consequences for the value of company assets. Just think, for example, of the effects of carbon taxes, or of the acceleration of the transition to renewable energy on resources and activities that would be directly impacted.

It is also worth noting that the risks associated with climate change could also bring opportunities. According to growth models estimates from the IIF, a transition to a low-carbon economy could eliminate climate damage equivalent to nearly 2% of the GDP of the group of G20 countries by 2050. The Organization for Economic Cooperation and Development (OECD) suggests that what it calls a “decisive transition” could raise GDP, in the long run, by up to 2.8% on average in the G20 countries.

In addition to financial risks and stability, a second reason why central bankers are focusing their attention on climate change is the potential impact on economic growth and inflation and, therefore, on their monetary policy decisions. ECB president Christine Lagarde alluded to the possibility of including the impacts of climate change on the eurozone economy in the institution's models and assessments.

The Federal Reserve officially considers climate change to be a negligible macroeconomic risk in the medium term. Nonetheless, as acknowledged by Glenn D. Rudebusch, from the Federal Reserve Bank of San Francisco, in a FRBSF Economic Letter:

“In coming decades, climate change—and efforts to limit that change and adapt to it—will have increasingly important effects on the U.S. economy. These effects and their associated risks are relevant considerations for the Federal Reserve in fulfilling its mandate for macroeconomic and financial stability.”

Lael Brainard, a member of the Board of Governors of the Federal Reserve System, noted:

“Climate risks are projected to have profound effects on the U.S. economy and financial system. To fulfill our core responsibilities, it will be important for the Federal Reserve to study the implications of climate change for the economy and the financial system and to adapt our work accordingly.”

The third area of ​​potential central bank engagement with the issue of climate change is subject to less consensus. It is about using their balance sheets to favor climate mitigation. For example, central banks could give special treatment to green bonds in their asset acquisition programs, turning quantitative easing (QE) into a “quantitative greening”. Despite opposition from members of the ECB – such as the president of the Bundesbank, the German central bank – Christine Lagarde has referred to a role of the ECB in supporting the European Union's economic strategy, which includes the need to mitigate climate change.

Regardless of the extent to which individual central banks take action in these three areas, they can no longer ignore the issue of climate change. As noted in the book “The Green Swan”, published in January 2020 by the Bank for International Settlements (BIS), there is a:

“… growing realization that climate change is a source of financial (and price) instability: it is likely to generate physical risks related to climate damages, and transition risks related to potentially disordered mitigation strategies. Climate change therefore falls under the remit of central banks, regulators and supervisors, who are responsible for monitoring and maintaining financial stability.”

The book’s title refers to a "green swan" as an adaptation of the concept of "black swan", popularized in finance after Nassim Taleb’s 2007 book. Black swan events are rare and unexpected events, with low probability but heavy impacts, which are fully understandable only after they happen. By their very nature, they do not fit into the normal and known framework. "Climate change can lead to 'green swan' events and be the cause of the next systemic financial crisis", note the authors of the BIS book.