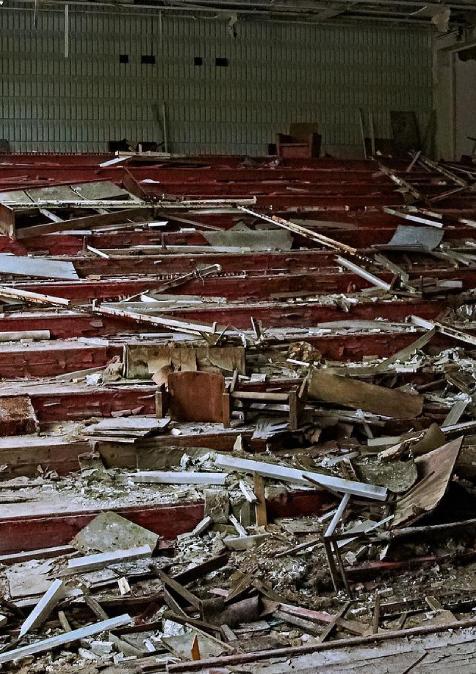 Any enforcement of peace through violence is absurd

Fear is not an adequate description of the feeling when bombs explode in your vicinity and you feel an invisible, destructive wave envelop your body, soul, and mind.

Tears may flow, screams are to be absorbed by those whose legs or arms are ripped out of their bodies by the blast-they may be blind forever, never hear a sound again, but in your subconscious, the blasts will never desert you ever., Thunderstorms remind-soaked you of these dark phases of your struggle to live. Sirens of blood-soaked ambulances recall those air raid warnings where hope and survival were lost in darkness, sleep turned into a luxury, and hunger was confirmation that you were still alive.

100 million people were sacrificed for the human folly during the 2nd world war. Another 100 million forced to deal with scars, never  healing , provoking pain and nightmares  and memories.

Dmitri Shostakovich, was Russia’s famous composers and in 1941, lived in the Soviet city, which was attacked by Nazi forces on June 22. He did not try to escape, instead he started to write his Seventh Symphony and finished the first movement in six weeks. He began his second on the 4th of September, when the German 900 days’ siege of Leningrad began.  During the siege 1.2 million citizens starved and froze to death. Joseph Stalin was  whose  “grip on power was sustained by the fact that nobody dared to speak their mind- not even to their wives and brothers”, as conductor and Shostakovich expert  Mark Wigglesworth notes in his” Symphony No.7 observations:” It was a terror of silence. A terror of loneliness. Anyone publicly seen or overhead to be unhappy was removed from society. ”Wigglesworth:” Shostakovich at times slept in his hallway so that when, as opposed to it, the secret police arrived, it would not upset his family.” The Soviet authorities persuaded the reluctant composer to be evacuated. He completed his final movement in the relatively secure town of Kuibyshev.

The Leningrad premiere of the Symphony No 7 was staged on August 9, 1942, the day Nazi -Generals, on Hitler’s orders, reserved tables in the “Astoria-” Hotel to celebrate with a lavish banquet the capitulation of Leningrad.

Of the original 40 members “Leningrad Radio Orchestra”, only 14 or 15 still lived in the city, but about 100 musicians were needed to play the Symphony. Musicians fighting at the front, soldiers in the trenches, who knew how to play an instrument, were called back to Leningrad. The first rehearsal was limited to three hours but was ended after 15 minutes because the 30 musicians present were too weak to play their instruments. They frequently collapsed during rehearsal, especially those playing brass instruments.

Yasha Babushkin of the Leningrad city arts department reported in a note, “the first violin is dying, the drum died on his way to work, the French horn is at death's door.” The performance at the Leningrad premiere, judged by  experts, was  of poor artistic quality but notable for the emotions raised in the audience, and for its finale, when some musicians “faltered” due to exhaustion, the audience stood up, “in a remarkable, spontaneous gesture…willing them to keep going.”(Michael Jones, 2008, Leningrad: State of Siege”) Music’s innate ability to be ambiguous, notes Mark Wigglesworth, is one of its greatest strengths, and for Shostakovich, it saved his life. ” He could express his beliefs that one day Stalin would be overthrown, that humanity would defeat tyranny, and he could survive”.

It’s not about Hitler. It is not even really about Stalin.

”By substituting one tyrant for another, explains Wigglesworth, he could compose a masterpiece which was able to be performed to millions of people in his lifetime, without betraying his conscience”. Wigglesworth is certain that the 7th Symphony, in reality, “is not about Hitler. It is not even really about Stalin. Its timelessness and its greatness are its constant relevance. The tragedy of this piece is that there will always be tyrants; there will always be suffering. The piece offers is the hope that despite that, the human spirit will never be broken. Evil will always be present, but so will humanity’s ability to resist it.”

Today, 80 years after the Soviet Union repulsed the Nazi invasion, and Shostakovich strengthened the spirit of his people with violins, flutes, and cells,” geopolitics and music collide once more” (New York Times, march 2, 2022). Ukraine is burning; cities like Mariupol Lviv or Odesa reduced to dust, to relics of a civilization worth its name and reputation.

Kyiv, the capital, is attacked by missiles to cut water and electricity supplies, possibly the beginning of an attempted siege a la Leningrad, the evil starvation of humans, ordered by Adolf Hitler, now copied by autocratic Vladimir Putin.

Eight years ago, when my friend, the British bestseller author Brian Moynahan, published his book “ Leningrad-Siege and Symphony” , he warned me that “ one day soon Putin will try to rule with fear, not as a Stalin, but a dictator, who does not limit his actions with empty words. He could turn into a new Stalin with his hands on the nuclear trigger.”

My friend knew what he was writing and talking about; one of his books was titled “Claws of the bear”, a history of the Red Army. A Hollywood producer bought Moynahan’s book, moving history of days gone by and more drama to follow. The author died, his film was never made, but his instincts turned into reality, to an invasion, another one after Crimea, which hardly any leader of democratic nations believed possible. An unprovoked invasion to re-write history, the renaissance of lost grandeur, willing, besides turning into a global outcast, to accept “empty galleries and fleeing artists; Russia’s uncoupling from the west.” (Guardian, April 17, 2022)

Playhouses are destroyed, as the Drama Theatre in Mariupol, where possibly hundreds looking for shelter are buried under rubble; (Aljazeera, March 16, 2022). The old Koenig Manor, the 18th century neoclassical palace in the northeastern Kharkov region, also known as Trostianets, where composer Petr Tschaikovsky composed “The storm”, op 76 in “1864” was hit by bombs . Missiles are devastating to art and education, the culture of a nation. Like a ghost unwilling to capitulate, willing to carry Shostakovich’s spirit of resistance into the rubble, Ukraine’ conductor and baroque eboist Alexander Koshelevare performing in a bunker of Kharkiv, his nation’s second largest town .

On his program: Tschaikovsky’s theme from “Swan Lake.(”Classic Music Daily”)His Russian colleague, pianist Aleksey Lyubimov and singer Yana Ivanilova were arrested in a Moscow cultural center, because they  dared to play  music from the Ukrainian composer Valentin Silvestro. A “bomb scare explained the intervention by police”. ‘(‘Slipper disc home”, April 13, 2022)Bolshoi’s   lead dancer Olga Smirnova (“danseclassique”, February 2022) decided to move to the Netherland’s “Dutch National Ballet”, declaring on “Telegram” her shame for the invasion:” It is not even about the fact that every second Russian has relatives or friends living in Ukraine, that my grandfather is Ukrainian and I am one-quarter Ukrainian .It is about the fact  that we continue  living in the 20th Century, although we have entered the 21st Century.

Political issues in the modern world must be solved exclusively by peaceful talks.” Hours, a day or two before the decision of the Moscow regime to punish war critics or opponents with harsh prison sentences, an open letter published by art magazine “Spectate” on February 25 was signed by 17000 musicians and artists, condemning the invasion of Ukraine:”

Any enforcement of peace through violence is absurd. ”Fear did not overshadow all courage, as Steven Brooks CEO of the Russian-owned auction house  Phillips, proved. He posted American artist Ellworth Kelly’s blue and yellow abstraction, which response to the Ukraine flag and stated (www.Widewalls.ch/magazine):” We at Phillips unequivocally condemn the invasion of Ukraine. Along with the rest of the art world, we have been shocked and saddened by the tragic events unfolding in the region. We call for an immediate cessation of all hostilities in the strongest possible terms.” Phillips, owned by a Moscow-based, luxury retail company, announced it donate 7.7 million dollars, net proceeds of its  20th Century and contemporary art auction in London, to the Ukrainian Red Cross (“Widewalls” April 13, 2022).