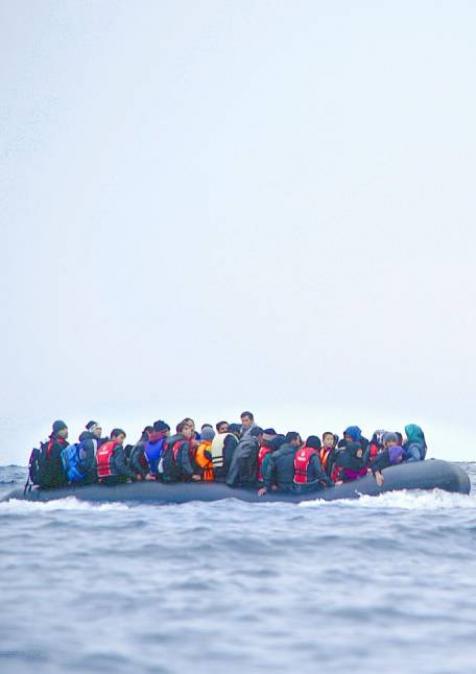 A principle seems to be establishing itself as a basic tenet of refugee and irregular-migration management policies in host countries in Europe and elsewhere: if you do not want refugees, pay to keep them in, or ‘outsource’ them to, poorer countries. But this raises some basic moral, political, and even financial questions.

The approach was pioneered by Australia, which in 2012 began shipping migrants who arrived on its shores irregularly by boat to Papua New Guinea and Nauru in the south-western Pacific. The program was said to cost the Australian government more than €650 million a year for just over 3,000 irregular migrants transferred offshore[1]. Then, in January 2019, the U.S. under President Trump launched its ‘Remain in Mexico’ policy, under which it returned to Mexico certain asylum applicants detained in the U.S. In the first two years of application, 71,000 migrants were affected, with the policy requiring them to wait in Mexico for months or years for the resolution of their applications (in tent courts). The program was suspended in June 2021 by the new Biden Administration, but reinstated again in December 2021, involving 7,259 more migrants in the first six months of 2022. In exchange, the U.S. provided more than $331 million in humanitarian aid to asylum-seekers, refugees, and other vulnerable migrants to Mexico and other Central American countries in 2021.

The British government has now taken up this externalization of migration policy, with an agreement reached in April 2022 with Rwanda (a ‘migration and economic development partnership’). Rwanda will receive during five years an undetermined number of migrants who arrive in Britain irregularly from France. The relocated migrants -single, young and male, according to the British government guidance- will present their asylum applications in Rwanda.

In exchange, the U.K. made un upfront contribution of €144 million (around 1.4% of Rwanda’s GDP) for the “economic development and growth of Rwanda”, and to finance “the asylum operations, accommodation and integration similar to the costs incurred in the UK for those services”. The UN High Commissioner for Refugees made clear that this scheme of ‘money for refugees’ goes against the obligations imposed on the UK as a signatory of the 1951 Convention of the statute of refugees[2].

After several legal setbacks, first before the British courts and then on June 14, the European Court of Human Rights (associated to the Council of Europe, not the European Union), the British government had to suspend the first charter flight to Rwanda, which would have carried the first seven of 100 refugees originally set to depart. Despite this and the public uproar about the plans (more than 20 bishops of the Church of England published a letter calling it “immoral” and saying it brings shame on Britain[3]), the government has clearly committed to continue with the policy in the near future, even speaking about it covering “tens of thousands” of refugees. Other countries, such as Denmark, are known for having proposed similar agreements involving Rwanda and other African countries[4], and between 2013 and 2018 a similar agreement was reached between Israel on the one side and Uganda and Rwanda on the other one to send 4,000 Eritrean and Sudanese asylum seekers who had submitted their applications in Israel. Rwanda is one of the most densely populated countries in the world and already hosts more than 130,000 refugees, mainly from Burundi and the Democratic Republic of Congo. It also has a ‘transit centre’ for more than 1,000 recognized refugees and asylum seekers relocated from Libya by UNHCR. It plans to host refugees arriving from the UK in hotels near Kigali, the capital, and provide them with refugee support or, if their asylum applications are refused, with the possibility to integrate into the country for other reasons.

The money for refugees trade-off is also reflected in the recent agreement reached within the European Union to distribute irregular migrants arriving at its borders. EU member country interior ministers agreed on June 11 on a “compulsory solidarity mechanism” for newly arrived migrants, in case of a migration crisis in one or more member states, in application of the Commission proposals made in September 2020 in the framework of the New Pact on Migration and Asylum[5]. EU countries that do not wish to receive migrants will have to make a financial contribution or help help other partners financially to pay for the return of migrants in an irregular situation without the right to asylum.

The agreement follows the failed attempt approved by EU leaders in June 2018 to create “disembarkation centres” in third countries in the Southern Mediterranean to get rid of the migrants rescued in the waters of the Mediterranean, a project promptly refused by all Maghreb countries. In any case, with the new agreement, the EU enshrines the rationale behind the EU-Turkey ‘deal’ of March 2016, under which Turkey committed to stop Syrian refugees travelling on from their territory to the EU (notably through Greece) and to readmit irregular migrants returned from the Greek islands in exchange for an amount of €6 billion over a three-year period. The money was intended to improve the humanitarian situation of the 3.6 million Syrian refugees in Turkey, i.e. money for keeping refugees on its territory.

For European countries, the question is clear: are human rights principles and international law commitments to be relegated for the political benefit that could obtained from a harsh policy towards irregular migration? And can countries opt out of solidarity in this critical issue if they pay an amount of money? Are basic values and principles to be subordinated to political pragmatism? Even if the European Union is meant to be first and foremost a community of values, and promotion of human rights is enshrined in Article 2 of the treaties as a founding principle of the Union (“The Union is founded on the values of respect for human dignity, freedom, democracy, equality, the rule of law and respect for human rights, including the rights of persons belonging to minorities”), political calculations seem to have prevailed since 2015.

For Rwanda and other African countries, also in North Africa, these developments pose another dilemma: is taking refugees from developed countries in exchange for increased financial resources for development a policy that can be politically justified? Is committing to this new tool of European externalization of migration policy morally acceptable? What message does it give to the international community on the role Africa wants to play in the international division of labour?