The April issue of the IMF’s “World Economic Outlook (WEO)” included a chapter on how globalization has helped knowledge from technology leaders spread faster than before. Cross-border technological diffusion has not only contributed to rising domestic productivity levels in advanced and emerging economies, but also facilitated a partial reshaping of the technological innovation landscape, with some recipients becoming new significant sources of research and development (R&D) and patents. It behooves us to understand what would it take for such change in the innovation landscape to be even broader.

Globalization has diffused knowledge and technology…

Higher trade, foreign direct investment and international use of patents have more intensively disseminated knowledge and technology across borders. A double dividend can potentially be derived from such a feature: as technology is typically “non-rival” in its use, its diffusion may lead to increases of average outputs at relatively low costs; furthermore, its multiple use may generate positive network effects through cross-pollination.

Knowledge flows from abroad can have impact both on productivity, through the adoption of foreign technologies in the production process, and – combined with domestic R&D – on innovation (Chart 1). 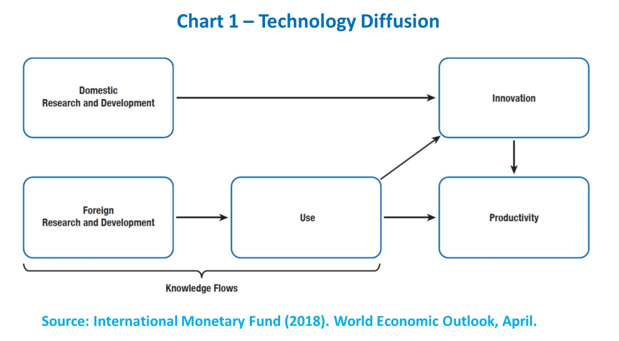 The WEO estimates that in emerging market economies, “from 2004 to 2014, foreign knowledge accounted for about 0.7 percentage point of labor productivity growth a year, or 40 percent of observed sectoral productivity growth, compared with 0.4 percentage point annual growth during 1995–2003” (Chart 2). According to the report, these results remain robust even when China is excluded, which indicates that productivity effects were broad among emerging market economies. 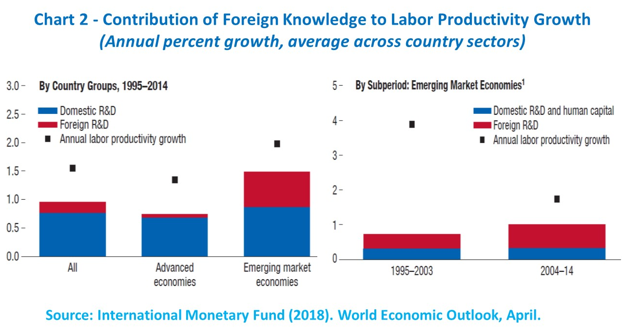 Furthermore, the report depicts a picture of a changing international constellation of sources of technological innovation, as R&D expenditures skyrocket in China and stocks of international patents pile up in Korea (Chart 3). These countries have joined traditional leaders in sectors like electrical and optical equipment and, especially Korea, in machinery equipment. 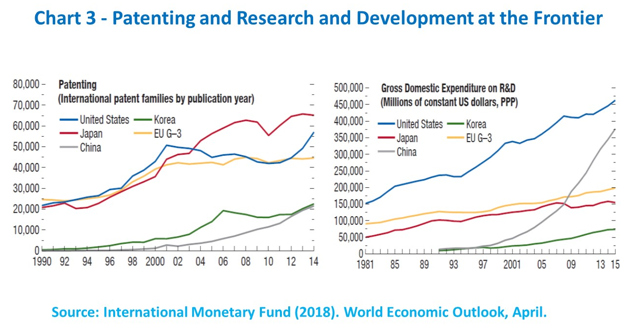 This has happened even as, since the early 2000s, traditional frontier economies have gone through a slowdown in the increase of labor and total factor productivities, together with slower growth in patenting and, to some extent, lower R&D investment. Competing explanations have been offered for the foregoing, either as a time gap in the transition between the third and fourth industrial revolutions or as a secular decline in opportunities to push productivity forward. In any case, as I pointed out back in 2010, prevailing technological convergence gaps and the non-rivalry in the use of existing technologies have offered emerging market economies the opportunity to keep advancing even if the rhythm decelerated at the frontier (Canuto, 2010).

The WEO also brings to the fore the results of an empirical exercise showing positive effects of heightened international competition on innovation and technological diffusion. That could be considered an additional channel through which globalization would be reinforcing incentives to innovate and adopt technologies from abroad.

Notwithstanding the enhancement of cross-border knowledge flows by globalization, simple interconnectedness does not automatically spark productivity increases and local innovation. Any application of technology embodies a “tacit” and locally specific – idiosyncratic – content that cannot be acquired or transferred by means of handbooks or any other codifiable forms of knowledge transmission. That knowledge cannot be made "explicit" as in blueprints and thus cannot be perfectly diffused as either public information or private property. It must be locally developed (Canuto, 1995).

One may expect rising requirements in terms of tacit-and-idiosyncratic knowledge and development of local capabilities as one thinks of production, technology adoption and invention, as depicted in Chart 4. One may also find as typical for latecomers an evolution often starting from production and technology adoption before invention. That has exactly been the case of Korea and China, which have strived to develop innovation capabilities after intense learning by using and adapting existing technologies. 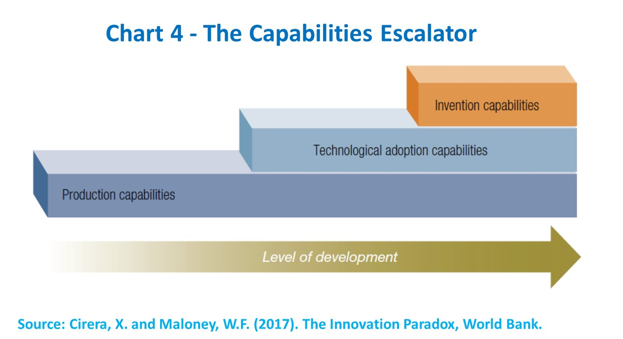 Success in stepping on and ascending the capabilities escalator depends on the presence of a broad set of complementarities, in the absence of which, returns from investing in the development of capabilities are hardly accruable. Access to finance, infrastructure, skilled labor, and managerial and organizational practices matters. Solutions to market failures that generate disincentives to the accumulation of knowledge must also be present. Furthermore, transaction costs associated with the business environment – trading across borders, hiring, enforcing contracts etc. – cannot be too high (Canuto, Dutz & Reis, 2010).

As the presence of such complementarities is not widespread, one may understand why the international innovation landscape change has been limited. It also explains what Cirera & Maloney (2017), from the World Bank, have called an “innovation paradox”: levels of innovation-related investment in developing economies not commensurate with high returns thought to accompany technological adoption and catch-up. Globalization may spread knowledge but it does not necessarily come with what it takes to fully profit from it.