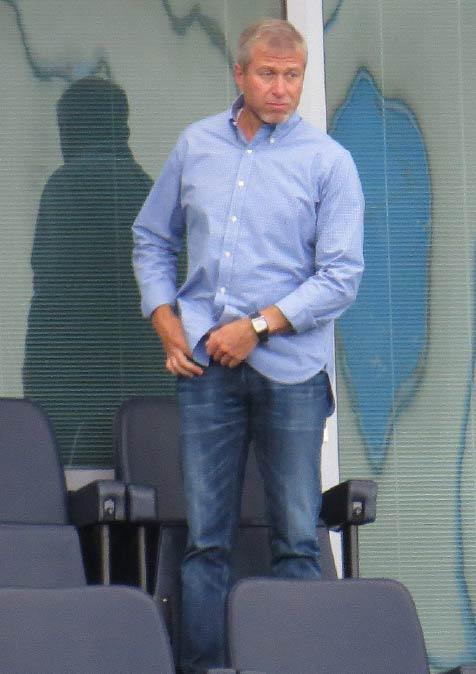 The goal of throttling oligarchs

Once again, the private jet of the world’s most famous oligarch, Roman Abramovich, was spotted in the Emirates, which more than ever seems attractive to wealthy Russians, who are less welcome, or not at all, in London anymore, the capital, which once was known as Londongrad, when its mayor was Boris Johnson, now the Prime minister. He is attempting to revive his fading political fortunes by acting like a pocket-size war leader a la Winston Churchill. The other day the conservative politician was strolling with the Ukraine president through the center of Kyiv, protected by heavily armed soldiers, who would not have been able to stop a missile from hitting the courageous duo. It seems so long ago, that London was flooded by thousands of wealthy Russians, 2581 (since 2008) were handed special investors visas, buying, among other goodies, real estate worth  1.5 billion pounds, as the BBC reported (March 11, 2022). The Economist published just weeks ago (March 5, 2022)) a cover story mourning  “the rise and fall of Londongrad”; and a fall it is, billionaires out of cash, framed as outcasts, allegedly supporting, at least not opposing, Russia’s dictator Vladimir Putin, who  is attempting to rewrite history if needed by the annihilation of a nation known as Ukraine of 40 million citizens.

Sanctions, the eternal hope of western governments, would cripple Russia’s economy, its ruble would not be worth the paper printed on. Yes, one group of Russians, the oligarchs among 1500 individuals sanctioned, could be motivated into pressuring Putin towards reality. They had a reason, they suffer. Their billions in bank accounts worldwide, were frozen, their planes and boats confiscated. Possibly they could move Putin back to reality. But would they dare? “The goal of throttling oligarchs”, wrote Whizy Kim  on the internet news site Vox ( March 10, 2022)”is to squeeze Russia’s wealthiest citizens to censure and compel them to pressure Russia’s president Putin to end his campaign against Ukraine”- a case of wishful thinking indeed- an estimated 1 trillion dollars of dark Russian money is hidden on the globe, and a quarter of these funds are controlled by Putin and his associates, estimated the Atlantic Council (March 8, 2022) .”The idea that individual oligarchs could sway Putin now is a misunderstanding of modern Russia “ insists Ben Judah, a Senior Fellow at the Atlantic Council and author of “Fragile Empire: How Russia fell in and out of love with Vladimir Putin”, “that’s how Russia operated 15 or 20 years ago, not how Russia operates today (Vox, March 10, 2022). “It’s important to realize”, argues Whizy Kim, “that since Putin was elected in 2000, the oligarchy in Russia doesn’t work as it used to; its members have a lot less power and influence than they once did” (Vox, March 10, 2022).

On the brink of a possible nuclear disaster

These punishing sanctions have so far prompted only muted comments about Ukraine from a few oligarchs, many of whom are based outside Russia. ”Some oligarchs”, writes Mrs. Kim in Vox, “have called for peace, without condemning Putin.”  At a press conference Mikhail Fridman, founder of Alfa Bank, called the invasion a tragedy, reported Vox, but when asked about using his influence to put pressure on the Kremlin, Fridman answered “you should understand that it’s a very sensitive issue”, and admitted he could not put his partners and staff at risk by commenting on Putin. Fridman was sanctioned by the EU on February 28 (Vox, March 10, 2022). Evgeny Lebedev, born in Moscow, his father a KGB agent, proprietor of the London newspapers Independent and Evening Standard, is just 300 million pounds’ worth, and neither an oligarch nor a Russian agent as he publicly insisted. His friend, Boris Johnson, helped him to be elevated to the House of Lords, securing a peerage for the businessman, educated in Britain. The publisher, now Baron Lebedved of Hampton and Siberia, dared to write a commentary in his Evening Standard,(February 28, 2022), just when Russians and Ukrainians were meeting for the first time to discuss peace: “President Putin please stop this war”, read the headline, followed by wishful thinking: “As Europe stands on the brink of another world war, and the world on the brink of a possible nuclear disaster, I plead with you to use today’s  actions to bring this terrible conflict in Ukraine to an end. As a Russian citizen I plead with you to stop Russians killing their Ukrainian brothers and sisters.”

Oleg Deripaska, an Aluminium tycoon with ties to the Russian military, founder of one of the largest industrial groups of Russia, Basic Element, wrote on Telegram  peace is “very important” and predicted, “the whole world will be different after these events, and Russia will be different (Vox March 10, 2022).”The former president of EN+Group, an energy company and the second-largest Aluminium conglomerate in the world, Rusal, was sanctioned by the US government back in 2018 for his ties to Putin in the wake of allegations of Russian interference in the American Presidential elections. The UK government sanctioned him, the EU is contemplating similar actions.

“When it came to the decision to go all-in“, conquering Ukraine, “Putin  took the decision alone”, believes Ben Judah. “Over the last ten years Putin has become increasingly distant from the old, so-called inner circle and the Russian elite in general.” (The sanctions) ”may indeed  cause grumbling  and dissatisfaction and fear in the political system. But when it comes to what might happen with Putin, Judah advises to think about “what happened to dictators, not what happens with strongmen with governments.” Washington’s treasury secretary, Janet Yellen, seems convinced that sanctions will “impose massive costs on Putin’s confidents.” That may be partially true, but in reality, wrote Justin Scheck in the Wall Street Journal (March 30, 2022)the impact is far milder.” Detaining yachts and aircraft deprive some of the world’s richest people of lavish comforts, he notes, and “produces flashy headlines”. Freezing their business is a different cup of tea, as the British say, because touching their business, reminds the Wall Street Journal, ”can cause turmoil in markets, harm investors in oligarch’s companies, who are otherwise unconnected to sanctioned individuals, and lead thousands of workers to lose their jobs. ”

The US government’s fear about disrupting global trade, prompted it to water down or avoid imposing financial penalties against key Russian entities and individuals (www.Livemint). Vladimir Potanin, estimated private wealth around 30 billion dollars, is the majority shareholder of the mining giant Norilsk Nickel, which just completed a deal with the French bank Société Generale, although he is sanctioned by Canada. On April 11 Reuters reported that the French bank will leave Russia and take “a 3 billion euro income hit.

”The buyer of the Rosbank unit is Interros Capital”, a firm linked to Potanin, who supposedly is not sanctioned in the US either. One possible reason: Norilsk Nickel controls ten percent of the global supply of refined nickel exports and palladium both vital to produce semiconductors, which were already in short supply before Putin began to rewrite history in Europe. 45 oligarch/ billionaires, noted Forbes (April 7, 2022) have not been sanctioned to date. One man on the Forbes list, Leonid Mikhelson, worth an estimated 18 billion dollars, founder and CEO of the leading Russian natural gas producer Novatek, has been sanctioned by the UK government in the first week of April 2022. That, for him, is the bad news.

The good one is, that flights between Moscow and Dubai are still possible , the Emirates “where no sanctions are rolled out” as Bloomberg reassured its Russian readers (March 25, 2022). Thus, no surprise if Roman Abramovich should buy a 1000 square meter pied a terre in the Emirates A few days ago, his “Solaris” - Megayacht was forced to leave the picturesque harbor of Turkey’s Bodrup, because the management company of the port is British, and doing any business with the sanctioned Russian oligarch would be a violation. And punishable by UK law. The Eclipse, armed with an anti-missile defense system, is still tolerated in Marmaris, Turkey- for now.