During the last few weeks, the United States has seen unfold one of its most contentious elections to date, which also registered a record turnout. While the results trickled in after November 3, each camp reassured its base regarding its confidence in a win, President Trump going as far as calling the election in his favor on Twitter. The following weekend, news outlets began calling the Presidency in favor of former Vice President Joseph R. Biden, who served under President Obama for two terms.

Ignoring the long-standing tradition of conceding an election in the face of a defeat in the polls, President Trump declared it “rigged”, galvanizing his base to believe it had been “stolen” by the Democrats. Conceding is supposed to showcase good sportsmanship in the face of defeat, and also has the role of rallying the country under the new President-elect, acknowledging the next incumbent and uniting all citizens under a working democratic process, unencumbered by partisan divisions.

While this latest lapse in protocol by President Trump has been highly scrutinized in the United States and abroad, a concession—or lack thereof—has no practical effect on the effective transfer of power from one head of state to the next. As such, on January 20, 2021 at noon, Presidential authority and prerogatives will automatically be transferred to the successor, who will be sworn in that very same day during the Inauguration ceremony. It should however be noted that President Trump has hindered the transition by preventing the Biden team from speedily accessing the funds and intelligence briefings meant to ensure the President-Elect’s readiness for office.

This seemingly efficient republican principle of governance derives from medieval Europe, where burgeoning monarchies and principalities tried to assert and reinforce their dominion over their respective lands.

While it might seem incongruous for a contemporary reader to justify going back more than a millennium to the birth of the ‘Divine rights of kings’ as context for an American presidential election, this exercise, which we do in this article, aims to showcase how certain principles we take for granted are the consequence of events and the actions of certain individuals. After all, isn’t one possible definition of history just a succession of such events?

The Beginnings of Permeability Between Temporal and Spiritual

The Roman Catholic Church was established with the selection of Simon Bar-Jona, or Saint Peter, by Jesus of Nazareth as the first head and Pope of his Church. During two millennia, the Holy See, the legal entity representing the Pope and the Roman curia, stood witness to many events, and its role and attributions evolved greatly over the centuries.

Relationships between the church and French monarchs evolved in the eighth century. In order to better understand this new development, some context is needed. During the rule of the Merovingian kings, which governed the current territories of France, Belgium, and certain parts of Germany and Switzerland, from 481 to 751, a new State position appeared and gradually grew in importance.

The title of maior palatii – or Mayor of the Palace – was created by Frankish rulers as a household position whose holder had the role of managing the royal domains, overseeing the king’s fortune, and ensuring the proper functioning of both palace and court. It eventually evolved to resemble a prime minister’s role.

Each of the two kingdoms constituting Francia – Austrasia and Neustria – had a Mayor of the Palace, chosen from the great regional aristocracy. This role evolved into a heavily sought-after position, until it became hereditary to the benefit of the Pippinid family, who would fill the position in both territories.

After the death in 741 of the Pippinid Charles Martel, Mayor of the Palace for all of Francia, who had been de-facto ruler of the country, the office was divided between his three sons, of whom the best-known was Pepin the Short. 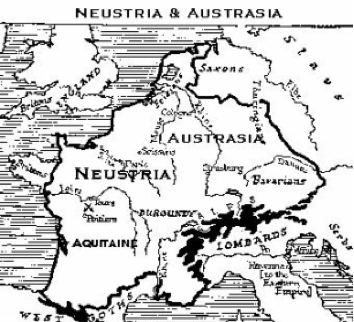 The two brothers reunited and pacified the territories of the Franks, putting down Grifo’s revolts and proclaiming in 743 Childeric III, the last of the Merovingians, as king of the Franks, as they could not justify calling themselves Mayors of the Palace without a king to serve.

Childeric III would be king in name only, and when Carloman joined religious orders in 747, leaving his office to his son Drogo, Pepin saw the potential to expand his power even further. He dismissed his nephew, and took over both Mayorships.

Pepin, having supported church reform on Frankish territory, and having effective sovereignty, sent a delegation to Pope Zachary in 751 to ask for the Church’s support in his desire to replace the current Merovingian king. The pontiff acquiesced, saying that the regality should reside with the one who possesses its authority, and not with the one boasting the sole appearance of it.

As such, Pepin the Short, benefitting from the added support of the Frankish nobility, was crowned in Soissons by the Gallic bishops in 751, with the full blessing of Rome. This marked the foundation of the Carolingian dynasty and reinforced the relationship between Frankish princes and the Papacy.

The eight century was a time of turmoil for Rome, as Lombard armies made up of Germanic warriors sought to end Byzantine lordship over the region then known as the Exarchate of Ravenna.

An Exarchate was an administrative division of the Byzantine Empire, and subject to the authority of an exarch. The Ravenna Exarchate was thus the center of Byzantine power in Italy, its main purpose being to secure defenses on the margins of the Empire.

As early as 568, Lombard invasions weakened the Exarchate and began to pose a real threat to Rome due to their proximity. The Lombards repelled a Byzantine counter-offense in 570, thereby increasing their power in the region.

Pope Etienne II, successor of Zachary, ever conscious of the Lombard presence at his gates, was forced to turn to warrior-princes to ensure his defense, and therefore journeyed to the northern Frankish town of Quierzy in 754 to appeal for the support of Pepin the Short.

The pontiff was received by the Frankish rulers and took the opportunity to cement links between Rome and the nascent Carolingian dynasty. He presided over the coronation and blessing of Pepin, his queen, and his two sons, Charlemagne, and Carloman.

These new royals were anointed in a ceremony inherited from biblical texts, in the manner of the ritual which is referred to several times in Scriptures. We can quote from the First Book of Samuel, where reference is made to Saul's anointing: “Then Samuel took a flask of oil, poured it on Saul’s head, kissed him, and said, ‘Has not the LORD anointed you ruler over His inheritance?’” [1] or again in reference to David: “So Jesse sent for his youngest son and brought him in. He was ruddy, with beautiful eyes and a handsome appearance. And the LORD said, ‘Rise and anoint him, for he is the one’. So Samuel took the horn of oil and anointed him in the presence of his brothers, and the Spirit of the LORD rushed upon David from that day forward. Then Samuel set out and went to Ramah”[2].

Although Pepin had received the nobility’s approval and that of the bishops, being consecrated by the Vicar of Christ deprived the nobles of their power of election, binding them to their princes by their new quality of sovereigns elected by God, through the Pope, and defenders of His Church. This marked the foundations of a governance of Divine Right which was to serve the Frankish, then the French monarchy, until the end of the Ancien Régime with the French Revolution of 1789.

Pepin and his children also received the title of Patrice of the Romans, linking them more to the capital of Christendom and therefore to its defense—a commitment which they honored in full.

On the strength of his victory in 756, the Frankish sovereign donated the conquered territories to the Bishop of Rome, including the Lombard conquests in Romagna, the duchies of Spoleto and Benevento, and the territories of the Exarchate of Ravenna, and promised to grant their sole governance to the Pope. This act, which came to be known as the ‘Donation of Pepin’ and was further reiterated and confirmed by his son, Charlemagne, in Rome, in 774, marked the beginning of the temporal power of the Pope, and of his successors. These original territories forming the ‘Patrimony of Saint Peter’ have mutated over the centuries to form what became known as the Pontifical States, and which remained under the authority of the Pontiff of the Roman Catholic Church until the annexation of these territories during the unification of Italy in 1870. The ensuing dispute was only settled through the Lateran Agreements of 1929, putting an end to the controversy of the ‘Roman question’.

On French territories, another principle followed the establishment of the hereditary divine rights of king: that of the instant transfer of said right.

While the progressive anointments of all subsequent monarchs by the Church engrained their unimpeachability into the collective memory of the country, the question of the succession became part of the old French coutume[3], but a first reference to this mortuus saisit vivum principle can be traced back to the thirteenth[4] and early fourteenth centuries, to legal judgements rendered by the Royal Courts[5].

This inferred that upon the king’s death, the heir instantaneously benefited from a seisin (possession) of his inheritance, even if he was unaware of it.

While this principle could benefit all landowners as the law would also be applicable to them, it had a particular significance for royal persons. It prevented the development of any possible strife upon the dead of a sovereign, as the crown prince would automatically ascend.

This principle eventually morphed into the proclamation ‘the King is dead, long live the King!’ which reiterates the principle of automatic succession, with no need for a coronation or an anointment to take place. As such, while a mortal king may die, the throne and the royal charge are never vacant—and the royal dignity is free from being attached to a ceremony or the acquiescence of one particular person.

Le mort saisit le vif eventually found its way into the French Code Civil, where its idea still lives on in today’s Article 724 on inheritance and succession.

While the present conundrum over the American election might seem far from the days of Pepin the Short, these same principles which became engrained and layered within the European institutions of the time, and their subsequent evolutions, have endured the test of time, and the American democracy—where the continuity of the State and the Office of President also insert themselves into this continuity of History—and its Republican traditions will endure, whatever some might have to say to the contrary.

[3] Coutume refers here to the old body of law which governed certain French territories under the Ancien Régime.