Share
Argentina, Turkey and the May Storm in Emerging Markets
Authors
Otaviano Canuto

The spike in US bond yields since mid-April in tandem with the strengthening of the dollar sparked a retrenchment of capital flows to emerging markets (EM), accompanied by a sell-off of assets in some cases. Argentina and Turkey suffered from strong and potentially disruptive exchange rate depreciation pressures in May, with financial markets calming down only after bold domestic policy moves (interest rate hikes in both countries and, in the case of Argentina, a decision to seek a new loan from the International Monetary Fund - IMF).

Why Argentina and Turkey? These economies can be singled out as tail-cases of combination of balance-of-payments fragility and elevated financial exposure to dollar appreciation. While other emerging markets also exhibit features of vulnerability, and new bouts of volatility may come from additional U.S. yields spikes and/or dollar appreciation, the baseline scenario remains one in which these countries will have to cope with a worsened growth-inflation trade-off but not necessarily be engulfed in crises. In any case, like in Argentina and Turkey, ultimately country-specific policy reactions will be of utmost relevance to define how smooth the adjustment will be to the new global financial scenario.

U.S. Treasury yields and EM spreads: like the “taper tantrum”

Credit Suisse has recently released a study of the impact of 15 episodes of US Treasury yield spikes since 2003 on EM credit spreads, comparing it with US corporate spreads. Chart 1 displays two of their relevant results: 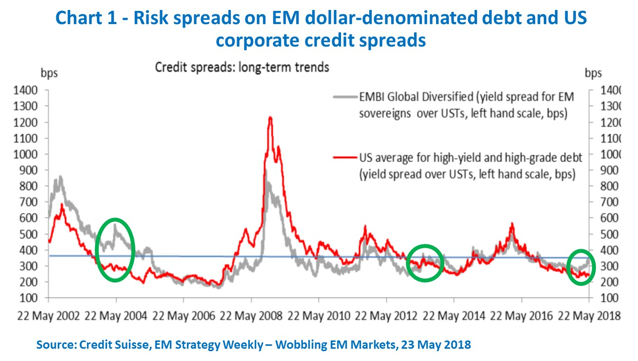 First, except for the highlighted episodes of 2004, the “taper tantrum” in 2013 and the current one, EM and US corporate credit spreads had moved in the same direction. Second, US Treasury yield spikes very often did not lead to widening EM or corporate credit spreads. When the US Treasury yield increased as a reflection of strengthening global growth, the positive impact expected from higher growth sometimes outweighed the credit-negative impact in terms of higher corporate and sovereign borrowing costs. This time, while US corporates seem to enjoy positive impacts from what underlies higher US yields, it looks like credit-negative effects are expected to prevail in the case of EM credit.

The rise in longer term US yields this year has so far been less than half of the one that took place in the “taper tantrum” and some analysts - like Citi Research – have highlighted the dollar strength as the main driver of the sudden decline in risk appetite in EM last month (Chart 2, left side). 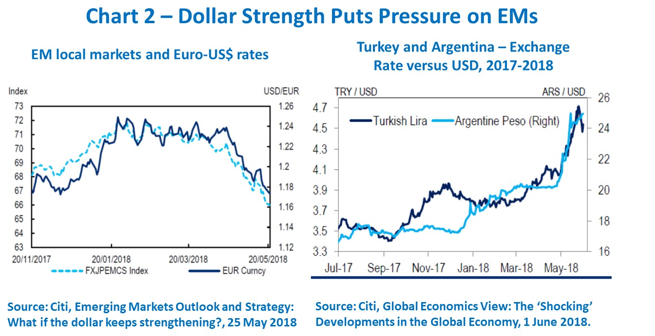 Flows of non-resident capital from September of last year and March this year were intense, even while US yields were already increasing, because of the US depreciation. Net capital inflows have led to significant increases in dollar denominated debt, which in many cases was concentrated in the private sector. Once the dollar reversed course, its combination with higher US interest rates became toxic, sparking fears not only of its impacts on debt services but also of interruption of currency flows in Argentina and Turkey.

Credit spreads in Turkey and Argentina were hit hardest by the combination of dollar strengthening and a US Treasury yield spike. Chart 2 (right side) shows how that translated into exchange rate devaluation pressures, while local currency government bond yields in both countries reached great heights. Pressures on the same directions took place in a wide range of EM – Brazil, Russia, Indonesia, South Africa, Mexico etc. – but not with equivalent intensity.

Argentina and Turkey entered the current phase of rising US Treasury yields and dollar values sharing two dimensions of vulnerability that might reinforce each other into a negative tailspin and… to some extent that is what financial markets anticipated.

First, current-account deficits have deteriorated substantially in the recent past (Chart 3). Since the “taper tantrum” in 2013, Argentina’s current account deficit has jumped to levels comparable to those of the then “fragile five” (Brazil, India, Indonesia, South Africa and Turkey), while Turkey is the only one among  the five countries to have remained there. 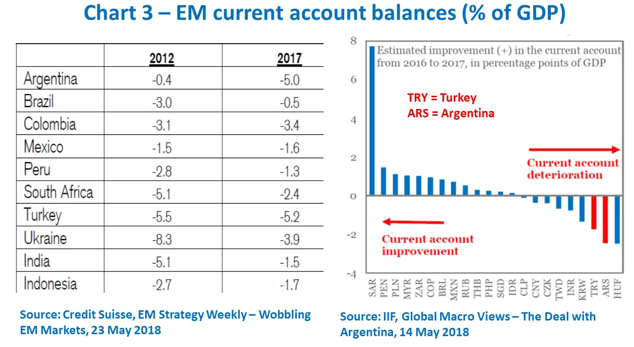 In both cases, inflows of foreign direct investment (FDI) fall significantly short from covering the gap in the basic balance of payments (and there is a flow dependence on external credit). Because of structural current account deficits that are not financed by FDI but rather by hot capital inflows, they feature low levels of reserve-adequacy according to the metric proposed by the IMF (Chart 4, left side). South Africa comes close. 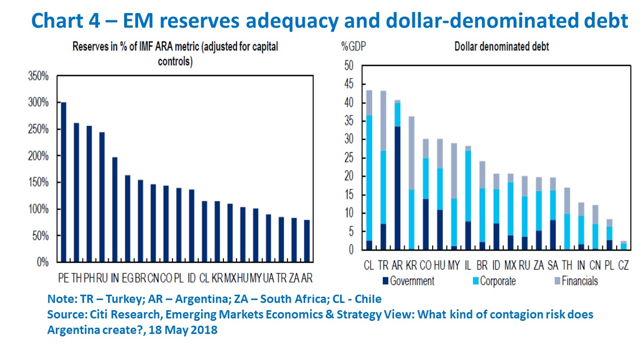 Second, the dollar denominated debt as a share of GDP in both Argentina and Turkey corresponds to a substantial exposure and fragility to the dollar strength of recent (Chart 4, right side). Furthermore, corresponding debtors in both economies do not have sources of “natural hedge” in terms of dollar revenues, different from the case of other economies highly-indebted in dollars. Currency mismatches in dollar-denominated debtors’ balance sheets are therefore currently prone to shocks arising from the dollar strengthening.

The singular combination of low reserves adequacy and dollar-denominated debt displayed by Argentina and Turkey, with a corresponding risk of negative feedback loops between them, made their economies obvious candidates to exhibit the highest sensitivity to the dollar strength and the mid-April US Treasury yield spike vis-à-vis other EM currencies. Under such circumstances, any events seen as undermining commitment to appropriate policies may serve as a trigger to unwinding of positions by asset holders.

In the case of Turkey, that was the case of President Erdogan’s electoral vows to rein in monetary policy and impose his will against “illegitimate money brokers” benefitting from high interest rates if he wins elections this month. Market jitters subsided only after Turkey’s central bank hiked its basic interest rate by 300 bps and signaled independence of monetary authorities.

In Argentina, the “gradualism” in reducing fiscal deficits and inflation, including a leniency with the local currency overvaluation as a substitute to interest rate hikes, was exacerbated with the softening of the two-digit inflation target last December, which was taken by investors as undermining the credibility of policy commitments. An unsuccessful attempt to deter exchange rate devaluation in May while maintaining everything else roughly similar only led to a partial depletion of reserves already in low levels of adequacy. Calm only returned to the peso in mid-May after a significant interest rate hike and a request to negotiate a “stand-by arrangement” with the IMF.

EM after the May storm

After the May storm, the baseline broad scenario for EM is one in which GDP growth is likely to stabilize and/or decelerate moderately in the months ahead. Heavy dependence on continued external financing is concentrated in just a few EM and in most cases net capital inflows in recent quarters can hardly be considered too above the curve. Only a few countries in EM have ‘basic’ balance-of-payments deficits – i.e. current account deficit net of FDI flows – that point to deep vulnerabilities and overall reserves adequacy is close to a historic peak. To some extent, the weight acquired by FDI in the composition of EM capital flows should be a resilience factor against the impact of a stronger dollar. However, a strong dollar will push growth risks to the downside and inflation risks to the upside.

Such a baseline view is, of course, subject to a hefty list of risks associated with further US yield spikes and/or dollar appreciation. Such a list includes the possibility of political uncertainty in Italy developing into a eurozone-wide, or even global, shock to activity, with effects on the dollar value. Not by chance, US yields have receded as financial markets have recently manifested increased risk aversion with respect to Italian bonds.

There are also the effects of the Fed’s balance sheet unwinding to watch, in tandem with rising issuance of US bonds as the US fiscal stimulus plays out. Depending on financial market conditions and risk appetite by investors, there might be some crowding-out pressures on EM bond holding, particularly if the Fed decides to speed up its balance sheet “normalization”.

Furthermore, EM country-specific developments should also be kept in sight. As shown in the experiences of Argentina and Turkey in May, the sensitivity to idiosyncratic country policy factors has come to the fore in the current financial landscape. Narratives underlining financial ebb-and-flows may rapidly evolve from benign to sad "tales of emerging markets".