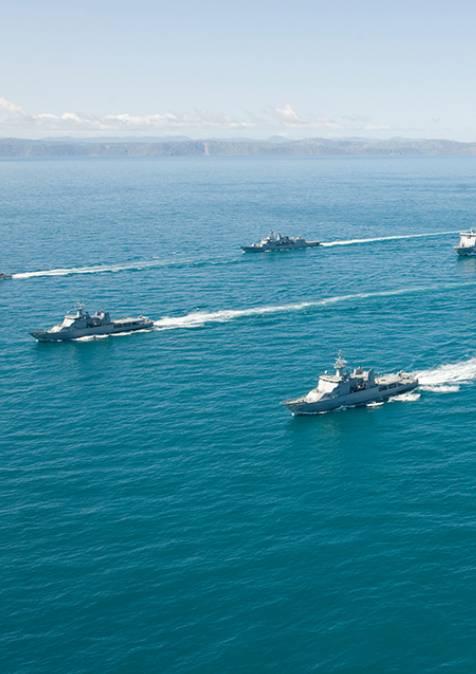 On these islands, writers and poets, and painters discovered unspoiled paradise, including promiscuous adolescent girls, which Paul Gauguin captured on canvass, his work admired by global art collectors until the French icon was accused of pedophilia- a century late, the beauties on the tableau seem to the self-appointed, global morality brigades to be children, or, who knows, young ladies suffering anorexia. The islands of the South Pacific, or Pacific in general, seemingly lost in eternity, a garden of Eden without apples were celebrated in Gauguin’s intimate journal, “Noa Noa”- his first trip to Tahiti in 1892. The sensuality captured by the painter and Hollywood directors between palm trees and tin-covered huts were also staged as musicals on Broadway or film sets, and, up to this day, “Bora Bora”, remains an island in the Polynesian sun,  their fata morgana of eternal marriage bliss, a magnet for Australian and American honeymoon couples, bewitched by uncontrollable emotions, dreams being touched by mild winds,  massaging the white sand, touching crystal clear blue water, colored with pink anemone fish, blackbar damsel or dash-dot goatfish. Before the foundation of the United States, more than 250 years ago, Spanish explorers, Portuguese or British navigators, such as James Cook, were drawn to the pristine islands, which not only fascinated artists and tourists but colonial powers and their geopolitical interests. Neighboring the Republic of Samoa, which gained its independence from New Zealand in 1962 (but remains a member of the British commonwealth), exists American Samoa, an unincorporated territory of the United States since 1904. However, citizens born on this US land are not automatically US-born citizens but “non-citizens -nationals”. Inhabitants of Tahiti, though, the largest of the French Polynesian islands, annexed in 1880   and declared a French colony, are French citizens but far away from the rest of the world—4400 kilometers south of Hawaii, 5700 Kilometers from Australia, and  15719 kilometers between Tahiti’s capital Papeete and Paris, far enough for nationalistic  French politicians, brainwashed scientists, and promotion driven generals to dare to test nuclear weapons in paradise— atthe atoll Muraroa, for example, where, above and below water, 193 nuclear bomb tests were conducted, one of them with fatal nuclear fallout for the local population.

With a cumulative population of under 13 million, the 14 sovereign nations and seven territories in the South Pacific span 15 percent of the world's surface-only six kilometers divide Australia and Papua New Guinea. In contrast, a mere 2000 kilometers separate Australia and Vanuata. Further north, the atolls of Kiribati are within 3000 Km of Hawaii. In comparison, Palau has located 1500 Km from the unincorporated territory of the United States, Guam, the largest island in Micronesia.US Naval Base Guam is home to a submarine squadron, special warfare units, and the Pacific Fleet. In other words: an essential hub in the strategic considerations of Washington. South Pacific nations, notes a “Brookings” report (July 20,2020), are also among the most exposed to natural disasters, a threat further exacerbated by climate change. All these factors combined make the Pacific one of the world's most fragile regions. The most aid-dependent, which serves the interests of Beijing - ”The island nations that stretch across the South Pacific-sparsely populated atolls and volcanic archipelagos, known more for tourism than lucrative natural resources,» reported CNN (June 6, 2022)” may not seem, at first glance, to be a significant geopolitical prize”, but the tiny island nations are now “at the center of giant geopolitical rivalry” .Pacific island countries  have become “the latest  arena  for a great power contest  between the US and China.” No surprise for Jonathan Pryke, who writes in his “Brookings” report, that over  the last two decades China has been steadily building  its influence in the South Pacific”. Many perceive this expansion to be growing at a rate much faster than what could be considered as natural reflection  of China’s  growing economic and geopolitical clout.” This has driven many analysts in the West to ask ‘what is China’s ambition in the South Pacific and what risks does this create?

Jonathan Pryke:” In the past three years, China’s footprint in the South Pacific has become so large, and its behavior in other parts of the world so much more assertive, that alarm bells  have started to  sound in capital cities; of the South Pacific’s traditional partners.” ”China’s pursuit of greater military reach in the Pacific islands”, analyzed the “United States Institute of Peace”( July 21,2022), “ draws parallels to Imperial Japan’s construction  of bases prior to World War II, and the implications are, likewise ,strikingly similar:” A Chinese military presence in the Pacific islands could complicate  transit between  Australia and the  US, allow  Beijing to increase  its power projection in the 2nd and 3rd  island chains , and bring Chinese military firepower  closer than ever to Australian and US territory.” Concerns that Beijing may have military ambitions in the region, stated CNN “were fueled in April, after China and the Solomon Islands, consisting of six major and  900 smaller islands,28 400 square km, population 652 858 ,which gained its independence from Britain 1978 (but kept Queen Elizabeth as head of State), signed a security  agreement with Beijing, “sparking fears of creating an opening  for China to establish  a military presence in the country”. Solomon Islands' two-way trade with China now makes up 46 percent of all trade. (Brookings) The pact with Beijing affirmed the “US Institute of Peace” “grants permission for the Chinese navy to dock and replenish in the Solomon Islands, laying the groundwork for a facility that could be expanded over time. China likely aims to establish a permanent military presence but will  do so in a way that allows  the two sides to deny it is a base.” The South Pacific islands sit astride a key passageway for Australian and American naval ships and merchant ships, says Timothy Heath, Senior international defense researcher at the RAND Corporation, Arlington, Virginia, “if China could establish (military) basing rights,  could deploy warships and aircraft temporarily to the islands and (its ships)could threaten the US and Australian ships and aircraft that passed by.”’(CNN, June 6, 2022) Even “ a boosted presence, short of a military one, could help China collect sensitive intelligence on the US and Australian military operations.

More consistent resolve will be necessary

In the past, Beijing attempted to convince the Island state  Kiribati to grant China access to an unused 6000-foot world war II runway on  Canton island ( Foreign Policy, July 7, 2021); in 2018, Australia’s press reported, as noted by the “United States Institute of Peace”, that “China had requested the right to establish a permanent military presence on the island of Vanuatu”, which is less than 2000 km from Australian territory, but no formal agreement had been drafted. China reported that the BBC (June 2, 2022) “long had its eye on the Pacific islands, where it steadily grew its trade, aid, and diplomatic activity since 2006”. Between then and 2017, as confirmed by the Australian think tank “Lowy Institute”, China provided close to  1.5 billion dollars in foreign aid to the Pacific island region through loans and grants. As CNN observed, China has backed widely publicized projects in some Pacific island countries; China’s ambassador to the Solomon Islands was photographed in April 2022 with Prime minister Manasseh Sogavare in front of the Chinese build National Stadium, and highways in Papua New Guinea were constructed, bridges in Fiji. Again and again, Beijing sent envoys into the region; even China’s leader Xi Jinping (in 2014 and 2018) visited the romantic islands in the sun. China’s engagement in the South Pacific also serves another purpose- the international isolation of Taiwan. CNN confirmed that only four of 14 South Pacific nations formally recognized Taiwan after the Solomon Islands and Kiribati switched allegiance to Beijing in 2019. The contest between traditional allies of the South Pacific and the Chinese challenger was “thrown into sharp focus”(CNN) in June of this year, when  Beijing’s Foreign Affairs minister Wang Yi attempted a flying marathon tour of ”sweeping ambition”(Maritime Executive”, June 17, 2022), eight island states in ten days, proposing to the leaders of Fiji, Solomon Islands, Kiribati, Samoa, Tonga, Vanuatu, Papua New Guinea, and Timor -Leste sweeping regional security and economic proposal “ with the potential”, as CNN  suggested, to “significantly ramp up Beijing’s role in the South Pacific.” Wang’s trip and the news of his proposal (which, for now, was rejected by the majority) sent the powers with long-standing relationships in the South Pacific- Australia, New Zealand, United States- scrambling”, Washington reappointing, after three decades absence, an ambassador to the Solomon Islands and pledging to intensify its support of the region. Australia started a multimillion-dollar infrastructure fund, “widely seen as a counter to China loans and spendings in the region “(BBC)What has been stated by Jonathan Pryke,     two years ago, sounds even more alarming today:” For Australia  and other traditional partners  in the Pacific, the stakes of China’s  ambitions in the South Pacific, are significant .China has established  itself  as an important partner  for Pacific islands governments. The opportunity, if it ever truly existed, to keep China out of the region, has long passed. Greater and more consistent resolve from the West will be necessary to mitigate these risks.”