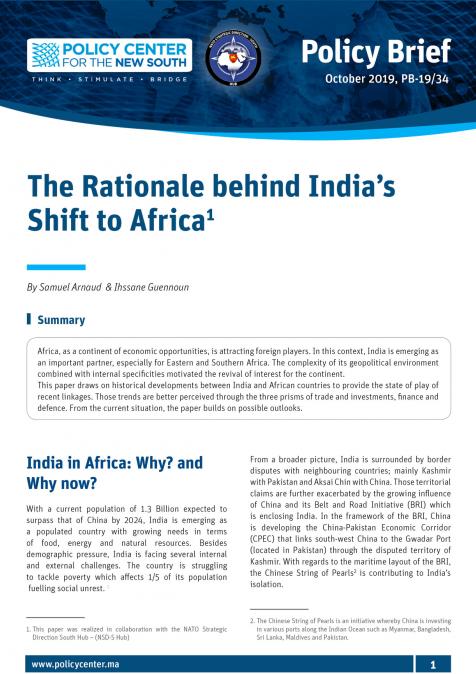 Africa, as a continent of economic opportunities, is attracting foreign players. In this context, India is emerging as an important partner, especially for Eastern and Southern Africa. The complexity of its geopolitical environment combined with internal specificities motivated the revival of interest for the continent. This paper draws on historical developments between India and African countries to provide the state of play of recent linkages. Those trends are better perceived through the three prisms of trade and investments, finance and defence. From the current situation, the paper builds on possible outlooks.

With a current population of 1.3 Billion expected to surpass that of China by 2024, India is emerging as a populated country with growing needs in terms of food, energy and natural resources. Besides demographic pressure, India is facing several internal and external challenges. The country is struggling to tackle poverty which affects 1/5 of its population fuelling social unrest.

From a broader picture, India is surrounded by border disputes with neighbouring countries; mainly Kashmir with Pakistan and Aksai Chin with China. Those territorial claims are further exacerbated by the growing influence of China and its Belt and Road Initiative (BRI) which is enclosing India. In the framework of the BRI, China is developing the China-Pakistan Economic Corridor (CPEC) that links south-west China to the Gwadar Port (located in Pakistan) through the disputed territory of Kashmir. With regards to the maritime layout of the BRI, the Chinese String of Pearls2 is contributing to India’s isolation.