“This article has been originally published in 'Morocco in Focus 2018,' the magazine of the Moroccan Embassy in New Delhi, India on the occasion of the Morocco National Day 2018.”

In an article published last year, the author stressed the role of partnership between Morocco and India for the inclusive growth of small farmers. There is no doubt that agriculture remains a major instrument for human development both in India and in Africa. Several international reports have put forward food security as a situation that many factors can guarantee. There are four main conditions to sustain food security. First, there should be an availability of food products. Second, the prices should be affordable, as part of the accessibility condition. Third, the quality of food in terms of nutrients is important to ensuring a real food security. The final condition is food adequacy with the various nutrition regimes.

Nowadays, agriculture and food security face two types of shocks. The first one is an internal shock linked with the whole agricultural sphere structure (intensification, storage, marketing, organization, food processing, use of technologies, etc.). The second one is an external shock that gathers climate change (including limited water availability) on the one hand and price volatility on international markets on the second hand. With those two challenges threatening crop growth, agriculture and food security remain priority areas for Morocco and India.

This paper will shed light on issues of food security in Morocco and India before looking at areas of cooperation in that field between both countries.

I. Food security in Morocco and India: what is at stake?

India and Morocco have traditionally distinguished themselves in the field of agriculture. Yet, challenges remain to ensure agriculture serves the purpose of food security. In fact, one way to ensure food security is to increase agricultural production. To serve this purpose, countries should enhance productivity of arable lands, improve water use efficiency with more sophisticated irrigation  techniques, optimize fertilizer use and manage soils in a sustainable manner. Another way of safeguarding food security is the organization of producers, food processing as well as infrastructure for storage and distribution.

The following graph shows how India and Morocco have different dependency ratios with respect to cereal imports. In fact, the cereal imports dependency ratio explains the difference between imported cereals and locally produced cereals. Hence, negative values reveal the country’s dependency on cereals imports, which is the case of Morocco in opposition to India. The difference between both countries lies in the fact that India mainly grows crops in -irrigated lands, which can ensure enough production annually without being exposed to climate risks while Morocco’s agriculture is mainly practiced in rainfed areas and still depends on pluviometry. 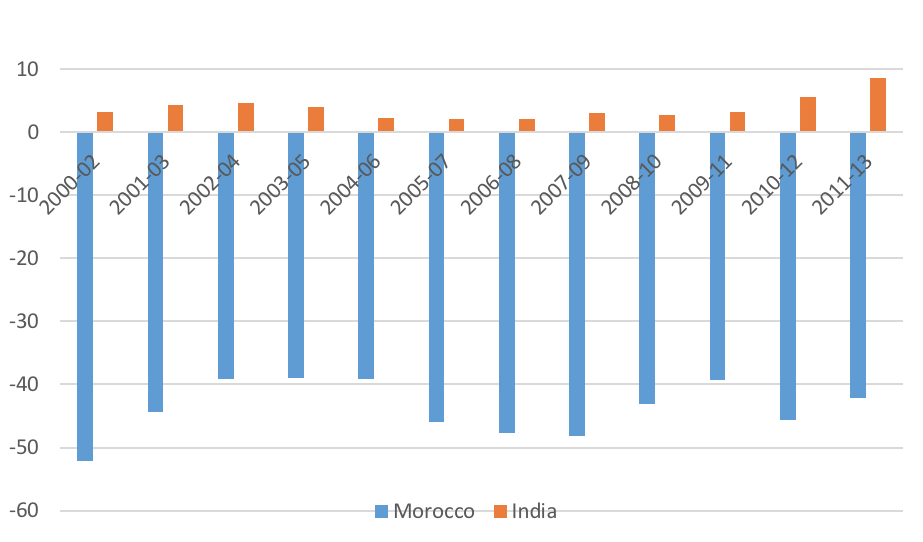 Source: Author’s calculation based on FAOSTAT and ESS calculations data

To ensure food security, Morocco and India have made numerous efforts. As an example, Morocco has undertaken several initiatives to contribute to food security both internally and on the African continent. In 2008, Morocco launched “Plan Maroc Vert” (PMV) with the ambition of boosting socioeconomic development by improving agricultural productivity. It designed policies for both large-scale and small-scale farmers. The green plan stimulated about $12 billion of investments from banks and international agencies for the sake of various agriculture-related projects. According to the Food and Agriculture Organization (FAO), the agricultural sector has grown by roughly 7% a year since the launch of the PMV.

Abroad, the Kingdom set-up large-scale fertilizer production plants both in Ethiopia and in Nigeria. Through such an initiative, the country was also able to share its long-acquired knowledge & expertise in fertilizers. The collaboration between Ethiopia and Morocco in this field is a good example of complementarity. By 2022, Ethiopia expects to become self-sufficient in fertilizers thanks to the association of Ethiopian potash and ammonia gas with Moroccan phosphoric acid.

Morocco has also expressed its political will to work towards sustaining agriculture and food security at the COP22 by launching the Triple A Initiative. The latter aims at providing funding schemes to adapt small-scale African agriculture, boost agricultural projects on the continent and take measures to cope with climate change.

As for India, food security is also a pressing issue due to its increasing population. In addition, land is shrinking in India and the country is thinking of ways to produce more on the same land portion. In 2013, the government enacted the Right to Food Act with the goal of providing subsidized food grains to almost 2/3 of India’s population. One of the challenges of India as its population will reach 1.5 billion people by 2030 is to provide protein-rich food by relying on recent technology and rationalizing its available, yet limited, land and water resources.

So far, India’s food security-oriented policies have attracted criticism at international trade platforms such as the World Trade Organization (WTO) since the Bali Meeting in 2013. At the Doha Round, India kept a firm position on defending its food subsidies although they come at high costs given the country’s development agenda.

As detailed above, Morocco and India share some common challenges when it comes to food security. In parallel, they have also developed respective expertise in promoting sustainable agriculture that can benefit farmers and consumers at the same time. Hence, opportunities for cooperation between both countries are numerous.

On the one hand, Morocco has mastered the combination of nitrogen, phosphate and potassium to create efficient fertilizers while India has, on the other hand, extensive experience in technology development applied to agriculture.

Morocco is investing in irrigation systems and India can help meet the Kingdom’s need in new irrigation technologies.

India and Morocco are keen on ensuring an agriculture productivity that can boost their economies, improve their food security and increase their exports to world food markets, enhancing their populations’ well-being and reducing poverty.

Hence, both can contribute to food security through a win-win partnership that would encompass African commodity markets. Yet, it is essential to adopt an approach that is aware of the limited reserves of natural resources.

In the past, India has witnessed social tensions due to fertilizer shortages. In addition, Moroccan and Indian populations are changing their dietary regime by replacing some cereals, roots and tubers by more diverse and expensive diets that include fruits and meats as the graph 2 shows. This can represent a room of cooperation for the two countries since such crops require a higher intake of phosphorus, which Morocco can provide to meet the needs of Indian arable lands. Indeed, Morocco can be a reliable partner for providing phosphates since Morocco is the largest producer of phosphates in the world.

Graph 2: Share of dietary energy supply derived from cereals, roots and tubers in Morocco and India 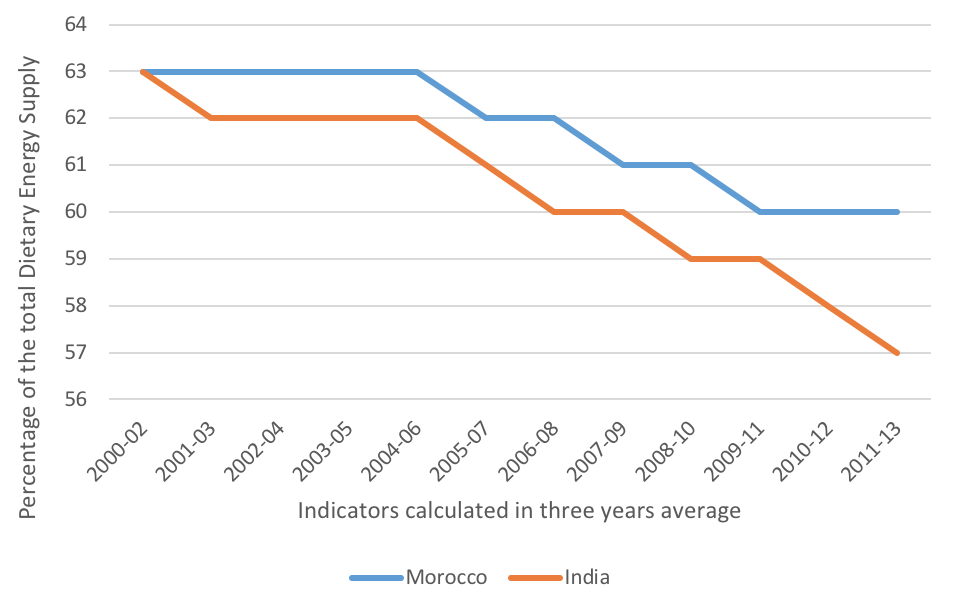 Source: Author’s calculation based on FAOSTAT and ESS calculations data

Gross domestic product per capita in both countries has considerably increased over the past sixteen years. This indicator is key to understanding purchasing power that constitutes the second condition for food security as detailed above. Indeed, the purchasing power represents accessibility to a basic basket of food that include food and eventually nutrients, which has improved in both countries since 2000 as Graph 3 illustrates. 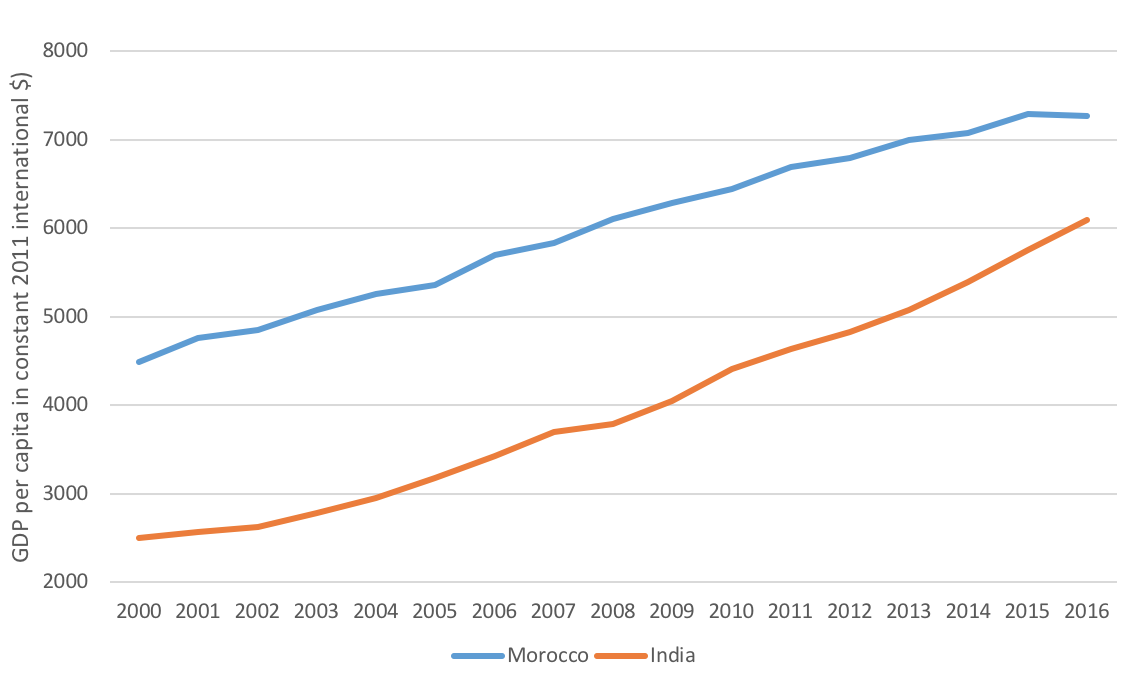 Concretely, India and Morocco can collaborate for food security by different means such as:

- Better water management and use of efficient irrigation technology;
- Reducing waste in the entire food production and consumption chain to rationalize the amount of water used in food production;
- Sharing expertise in foodprocessing and post-harvest methods;
- Exchanging ideas about policy planning in the agricultural field;
- Measuring and collecting data to design factbased policies.

In sum, given the efforts for agricultural development in both India and Morocco, opportunities for knowledge-sharing and technology transfer are genuine. Both countries can take advantage of their longstanding expertise to improve their respective socio-economic conditions.