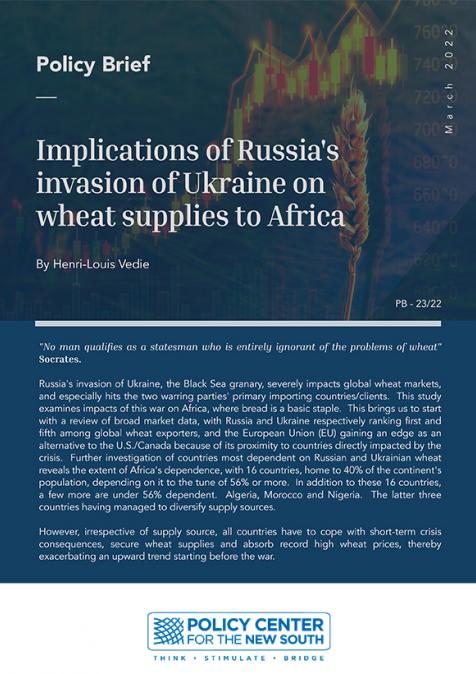 Russia's invasion of Ukraine, the Black Sea granary, severely impacts global wheat markets, and especially hits the two warring parties' primary importing countries/clients. This study examines impacts of this war on Africa, where bread is a basic staple. This brings us to start with a review of broad market data, with Russia and Ukraine respectively ranking first and fifth among global wheat exporters, and the European Union (EU) gaining an edge as an alternative to the U.S./Canada because of its proximity to countries directly impacted by the crisis. Further investigation of countries most dependent on Russian and Ukrainian wheat reveals the extent of Africa's dependence, with 16 countries, home to 40% of the continent's population, depending on it to the tune of 56% or more. In addition to these 16 countries, a few more are under 56% dependent. Algeria, Morocco and Nigeria. The latter three countries having managed to diversify supply sources.

However, irrespective of supply source, all countries have to cope with short-term crisis consequences, secure wheat supplies and absorb record high wheat prices, thereby exacerbating an upward trend starting before the war.