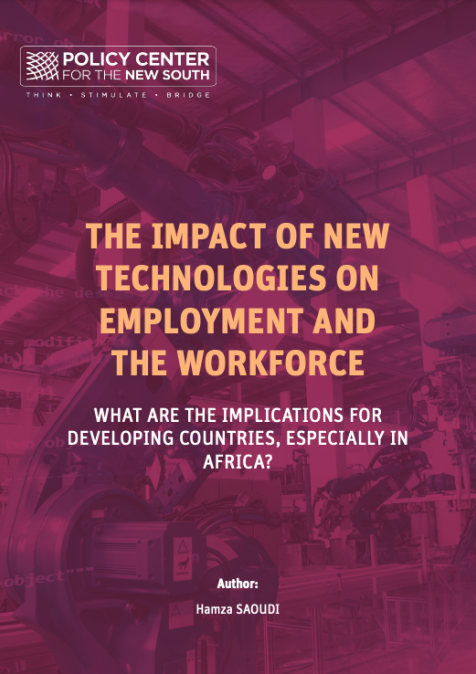 Download PDF
Share
The Impact of New Technologies on Employment and the Workforce: What are the Implications for Developing Countries, Especially in Africa?
Authors
Hamza Saoudi

New technologies, such as automation, artificial intelligence and industrial robots, are often seen as a real danger for existing jobs and also for future job-creation prospects. There is a perception that they will make work redundant and lead to massive job destruction. However, others believe that automation, like previous technological waves , will increase the demand for labor in other sectors and create new jobs that did not exist in the past, and therefore lead to higher wages and improvements in the standards of living.

It is important to note that technological advances have historically increased productivity, generated sustained increases in living standards and created more jobs than they have destroyed . However, this progress has sometimes been accompanied, especially during the transition period, by several disruptions, particularly in the labor market. Indeed, technology has brought about profound structural economic change, creating new jobs and sectors, while destroying and modifying others, with major consequences for certain categories of the population, especially low-skilled workers.

Ongoing technological advances offer new prospects for higher productivity and economic growth. However, they are also accompanied by growing concerns about their future impact on the workforce , especially in the current context of high and rising levels of inequality and polarization in the labor market. It should be noted that we have experienced in the past both an increase in incomes and a stable labor share because of other technological changes that have generated new tasks for labor and, thus, offset the job losses induced by automation. The future of work will certainly depend on how artificial intelligence (AI), robots, and automation impact the allocation of tasks to labor and capital.

It will also depend on the preparation and measures taken by governments, in particular, for effectively supporting the population during this transition, to ensure that new technologies are inclusive and beneficial to all social categories of society.