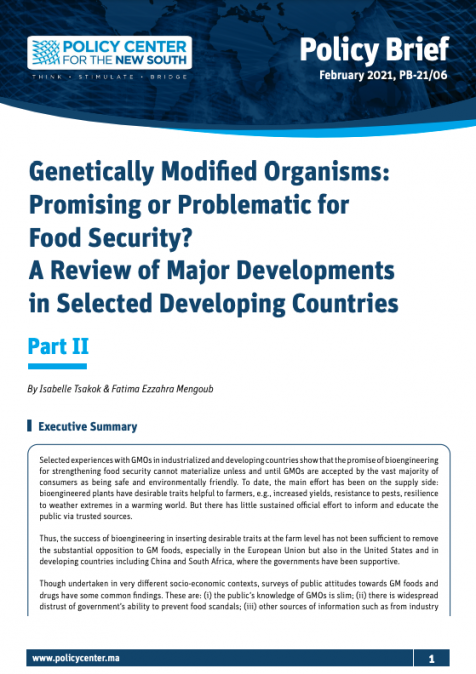 Selected experiences with GMOs in industrialized and developing countries show that the promise of bioengineering for strengthening food security cannot materialize unless and until GMOs are accepted by the vast majority of consumers as being safe and environmentally friendly. To date, the main effort has been on the supply side: bioengineered plants have desirable traits helpful to farmers, e.g., increased yields, resistance to pests, resilience to weather extremes in a warming world. But there has little sustained official effort to inform and educate the public via trusted sources.

Thus, the success of bioengineering in inserting desirable traits at the farm level has not been sufficient to remove the substantial opposition to GM foods, especially in the European Union but also in the United States and in developing countries including China and South Africa, where the governments have been supportive.

Though undertaken in very different socio-economic contexts, surveys of public attitudes towards GM foods and drugs have some common findings. These are: (i) the public’s knowledge of GMOs is slim; (ii) there is widespread distrust of government’s ability to prevent food scandals; (iii) other sources of information such as from industry are also suspect, (and even from scientists although there is more trust); (iv) the main sources of information about GMOs are mainly from social media, and media including television and newspapers, and NGOs and activist groups, which are largely anti-GMO; and (v) there is no clear positive correlation between high level of formal education and favorable perception of GMOs.

Is the opposition based mainly on ignorance, fear of the unknown, or breakdown in trust in government and industry? Or is the problem rather on the supply side in terms of the oligopolistic structure of the GM seed business, the market power imbalance between business and small farmers, the transparency of operations of bioengineers? Or is there a combination of both demand and supply factors? There is a lot to disentangle here.

What is clear is that the powerful technology of bioengineering cannot be viewed as a ‘magic bullet’ to solve widespread food insecurity, as hoped for by its early advocates. For African leadership interested in operationalizing the Africa Continent Free Trade Area (AfCFTA) in the near future to realize the full contribution of GMOs to the food security of its people, among other things, now is an opportune time to reevaluate both the supply of GM technologies and potential demand for such products in terms of food and feed safety, biological diversity, and environmental sustainability. This holistic evaluation is essential to shape the launching of a coordinated and effective Africa-wide approach.