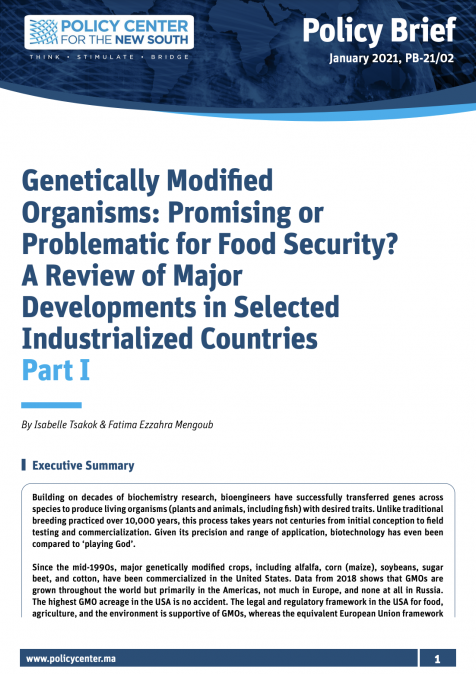 Building on decades of biochemistry research, bioengineers have successfully transferred genes across species to produce living organisms (plants and animals, including fish) with desired traits. Unlike traditional breeding practiced over 10,000 years, this process takes years not centuries from initial conception to field testing and commercialization. Given its precision and range of application, biotechnology has even been compared to ‘playing God’. Since the mid-1990s, major genetically modified crops, including alfalfa, corn (maize), soybeans, sugar beet, and cotton, have been commercialized in the United States. Data from 2018 shows that GMOs are grown throughout the world but primarily in the Americas, not much in Europe, and none at all in Russia. The highest GMO acreage in the USA is no accident. The legal and regulatory framework in the USA for food, agriculture, and the environment is supportive of GMOs, whereas the equivalent European Union framework is not. In the U.S., the process of bioengineering itself is not regulated whereas it is in the EU. The EU adopts the precautionary principle (PP) in regulating GMOs, considering the scientific evidence on their impact to be uncertain. Indeed, in the EU, the cultivation and import of GMOs are subject to a law requiring prior authorization and the labelling and traceability system is mandatory. In the United States, mandatory labeling of GMOs will only start on 1 January 2022. Both legal approaches have been criticized: the U.S. for being too pro-business; the EU for being too anti- innovation. Perceptions of GMOs fall broadly into two opposing camps, although repeated surveys of consumers in both the U.S. and the EU show that the majority do not know much about GMOs. The pro-GMO camp sees in bioengineering the promise of agriculture that can improve food security including through higher yields, greater resistance to pests, more resilience to weather extremes like drought, and even better nutrition. They point to the fact that there has been no evidence of harm either to consumers or to the environment. The anti-GMO camp dismisses such support as biased, often without evidence for such bias. They assert that GMOs are bad for consumers, bad for biodiversity and bad for the environment. They see the control of bioengineered seeds by a handful of multinationals as a major threat to the livelihoods of millions of farmers, in particular smallholders, and the food security of nations dependent on these seeds.