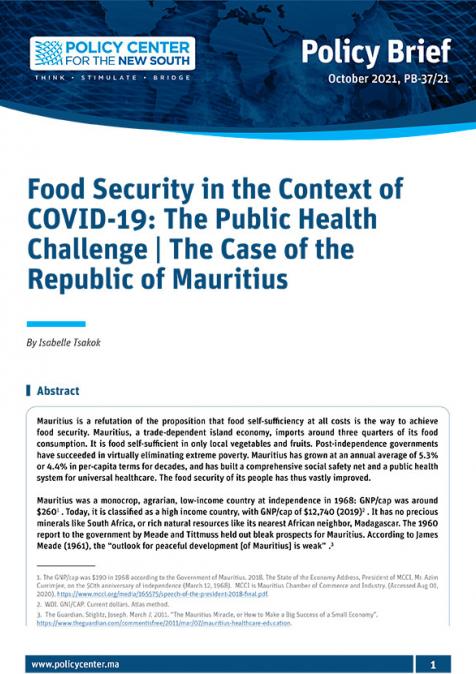 Download PDF
Share
Food Security in the Context of COVID-19: The Public Health Challenge | The Case of the Republic of Mauritius
Authors
Isabelle Tsakok

Mauritius  is  a  refutation  of  the  proposition  that  food  self-sufficiency  at  all  costs  is  the  way  to  achieve  food  security.  Mauritius,  a  trade-dependent  island  economy,  imports  around  three  quarters  of  its  food  consumption. It is food self-sufficient in only local vegetables and fruits. Post-independence governments have succeeded in virtually eliminating extreme poverty. Mauritius has grown at an annual average of 5.3% or 4.4% in per-capita terms for decades, and has built a comprehensive social safety net and a public health system for universal healthcare. The food security of its people has thus vastly improved.

Mauritius  was  a  monocrop,  agrarian,  low-income  country  at  independence  in  1968:  GNP/cap  was  around  $260 . Today, it is classified as a high income country, with GNP/cap of $12,740 (2019) . It has no precious minerals like South Africa, or rich natural resources like its nearest African neighbor, Madagascar. The 1960 report to the government by Meade and Tittmuss held out bleak prospects for Mauritius. According to James Meade (1961), the “outlook for peaceful development [of Mauritius] is weak”