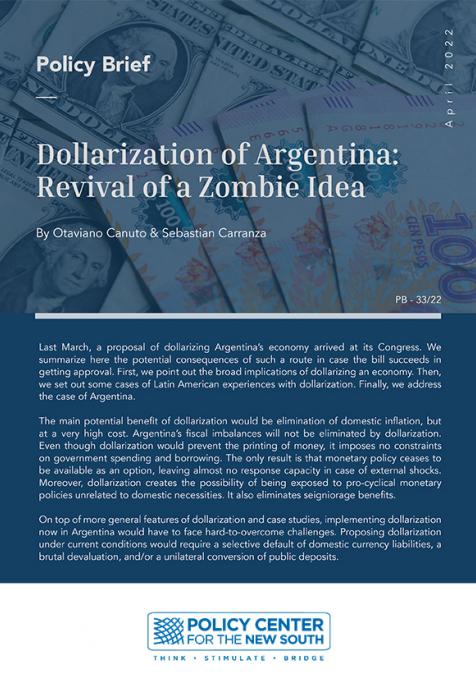 Last March, a proposal of dollarizing Argentina’s economy arrived at its Congress. We summarize here the potential consequences of such a route in case the bill succeeds in getting approval. First, we point out the broad implications of dollarizing an economy. Then, we set out some cases of Latin American experiences with dollarization. Finally, we address the case of Argentina.

The main potential benefit of dollarization would be elimination of domestic inflation, but at a very high cost. Argentina’s fiscal imbalances will not be eliminated by dollarization. Even though dollarization would prevent the printing of money, it imposes no constraints on government spending and borrowing. The only result is that monetary policy ceases to be available as an option, leaving almost no response capacity in case of external shocks. Moreover, dollarization creates the possibility of being exposed to pro-cyclical monetary policies unrelated to domestic necessities. It also eliminates seigniorage benefits.

On top of more general features of dollarization and case studies, implementing dollarization now in Argentina would have to face hard-to-overcome challenges. Proposing dollarization under current conditions would require a selective default of domestic currency liabilities, a brutal devaluation, and/or a unilateral conversion of public deposits.