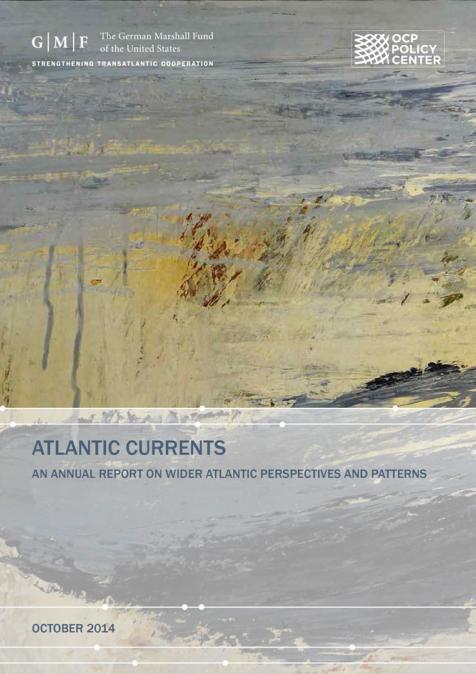 OCP Policy Center and the German Marshall Fund of the United States are pleased to release the inaugural edition of Atlantic Currents, a new annual report charting Wider Atlantic perspectives and patterns. The report is the result of a close collaboration between the German Marshall Fund of the United States and the OCP Policy Center, and is a companion to the Atlantic Dialogues initiative, our annual forum in Morocco. Both activities are part of a multi-year partnership to promote dialogue and analysis on issues affecting the Wider Atlantic — the United States, Europe, Africa, Latin America, and the Caribbean — as well as global stakeholders in Atlantic affairs. The essays and data presented in this first edition of Atlantic Currents, co-edited by the OCP Policy Center and German Marshall Fund, illustrate some of the key opportunities that are driving North-South convergence and could be transformative within and beyond the Atlantic space.

The “Washington-Brussels axis,” the northern dimension of Atlanticism, is only part of the Atlantic story. There are many reasons to take a more comprehensive approach to transatlantic relations, embracing a wider geographic space, and with greater weight given to actors and issues in the southern Atlantic. From this perspective, South-South and North-South relations take on greater significance. This is not to dismiss the weight of interactions across the North Atlantic, which remains overwhelmingly important in economic and diplomatic terms. But just as the Pacific Basin (or Pacific Rim) has emerged as an intellectual and strategic framework, an Atlantic Basin perspective is increasingly compelling. This inaugural edition of Atlantic Currents charts key developments affecting the future of Atlantic societies. It also explores new avenues for Wider Atlantic cooperation that could foster transformative change and improve the living standards of millions around the Atlantic Basin.