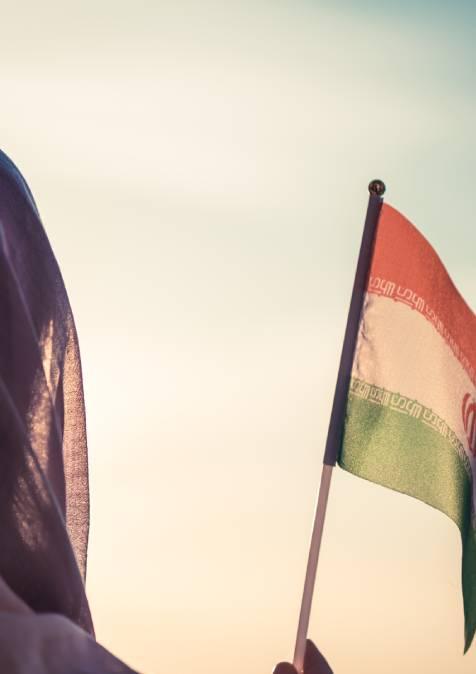 Protests are a reoccurring reality in this troubled nation, located in one of the world's most essential and dangerous strategic regions. Tires are often burning, and women dance in the streets, clapping their hands in defying mode. Shots are fired, and at times live ammunition is used by the Basij, black-clad paramilitary units, mainly recruited in rural regions and symbolizing the rural/urban divide in the theocracy of 86 million people. The stormtroopers of the repressive Iranian regime, which have been leading the oil-rich and nuclear-thirsty nation since a  revolution in 1979 (the year Ayatollah named Ruhollah Khomeini was transported by a particular Air France flight from the French village Neauphle le Chateau to Tehran to replace the rejected emperor)steer their motorcycles into the crowds, using long batons to hit protesters, kids, women, students, workers hard enough to drive them into fleeing threatening arrests and torture. Iran is used to these upheavals, driven by high electricity prices or no electricity, lack of water, teachers demanding higher wages, and students of the respected Sharif- University in the capital more democracy. The most significant of the anti-government uprising in Iran over the last two decades, noted CNBC (September 23, 2022), was arguably  Iran’s “Green Movement” in 2009, where hundreds of thousands of Iranians, predominantly students, protested election results widely believed rigged. This time, fall of 2022, all is different. The demonstrations “speak volumes about the younger generation's attitude toward the Islamic Republic and their current desperation”, says Roham Alvandi at CNBC, an Iran historian and professor of International History at the “London School of Economics”: ” The speed at which these uprisings have spread. The international support they have drawn present a significant challenge to the regime”. A 22-year-old woman died in the custody of the infamous morality police, arrested because she dared to show more hair in public than tolerated by fanatic morality censors. In the shadow of her funeral on September 17, two more girls, just 16, went missing during anti-government protests, and their bodies were eventually found, smashed, near a high-rise building. The verdict of the authorities: suicide. The Kurdish Iranian Mahsa Amini, accused of wearing a bad hijab, died of a heart attack, claims the authorities, witnesses watched her being hit with batons by police or paramilitaries, which are estimated to be a one million activist force. In the eyes of the “Basij’s, the  Ayatollah’s shock troops, the hijab is  “a bulwark against gender mixing, adultery and corruption-its removal a sign of decadent Western culture.”(Associated Press, October 13, 2022).

The Basij’s, observed Sanam Vakil, an Iran expert at the “Chatham House” think tank in London, have been “chasing, clubbing, shooting protesters, trying to round them up, beat them up, throw them into vans to take them to detention centers where protesters are roughed up and pressured.” At least temporarily, the guardians of the Islamic Republic lost control- anti-government  protests  have spiraled into the biggest show of opposition to Iran’s  authority in years, believes “The Guardian” ( October 3, 2022) “with many calling for the end of more than four decades of Islamic clerical rule.”For the Islamic theocracy,” whose rigid laws forbid any dissent, the acts of rebellion present a significant challenge for the state’ . Protests were observed all over the country, in cities like Yazd, Kermanshah, and Shiraz.In a comparison of previous upheavals, “the protesters are much bolder”, observed Evan Siegel, an academic who has co-published  books on Iranian history .”Driven by their fury of decades of repression and humiliation, they have held their own in the street, fighting with the repressive organs, particularly the hated para-police. ”Siegel: “For the first time I can recall, the regime’s medieval attitude towards women has become a central issue in mass resistance to the regime. Women are manning the front lines; women demonstrate courage and anger. All ages. They took off their scarves and cut some hair in public, a snippet of hair turning into a symbol, enticing actresses in Paris and other European cities to demonstrate solidarity with the women of Iran by cutting off s and other artists, some or all of their hair.” What the women of Iran are currently accomplishing is extremely rare”, judged Oezlim Topçu in the German newsmagazine “Der Spiegel’ (October 15, 2022)-“a human and political tour de force. They have become the regime’s toughest adversaries and triggered fear within the misogynist circles of power in Tehran-which must now amplify oppression at home while continuing its nuclear posturing abroad,all while dangling the lures of its fossil fuels; another of the women’s achievement is that they are forcing the West to adapt a clear stance ,and re-examine its policies.” The latest protests, wrote the news service “Associated Press” ( October 13, 2022) ”have a different feel, which could make them harder to extinguish. They are led by young women fed up with the increasingly heavy-handed enforcement of the country's conservative Islamic dress codes “. But they draw support from a wider swath of society, including ethnic minorities and even some workers in Iran’s crucial oil industry. Dozens of Iranian celebrities, soccer players, and artists, inside or outside the country, wrote: “Reuters”(September 28, 2022)” have backed the demonstrators. Videos showed the protesters in Tehran shouting, “Mullahs get lost” and “Death to the leader”, Ayatollah Ali Khamenei, who accused Israel and the US as the organizers of the demonstrations- who else could be so devious? Huge, jubilant crowds gathered at Tehran’s airport when Elnaz Rekabi, an Iranian competitive climber, returned from a competition in South Korea. (October 19, 2022, The Guardian) She did not win gold but performed WITHOUT wearing a headscarf, as female athletes from the Islamic Republic required. Her gesture was unintentional, she declared later, but her team sent her home with the next available plane. And then she disappeared. The country’s main medical association issued a statement signed by 800 physicians condemning the violence  erupting in the nation and stating that they consider “the people as  the real owners   of the country “, and “we support their just demands.”(New York Times” , October 12, 2022) The idea that the  Iranian regime is capable  of being reformed, is a myth, Iranian born British actress and activist Nazanin  Boniadi  declared, “for 43 years, we ‘ve only responded  to the symptoms of the Islamic Republic malign activities with a focus on considering Iran’s nuclear ambitions and regional aggression”. But: “to address the cause, which is the regime itself, we must commit ourselves to intelligently supporting the Iranian people’s aspiration for the representative government (Al Arabiya, October 7, 2022).”In his work “Democracy in Iran-why it failed and how it might succeed”, published in 2016, Misagh Parsa, Professor of Sociology, at Dartmouth College ,warned that politicization  and polarization in Iran would produce further radicalization, noted Ladan Boroumand, cofounder and senior fellow at the  “Abdorrahman Boroumand Center for  Human Rights in Iran.”(” Journal of Democracy, April 2018)Reformism was going nowhere, a solution no longer adequate to the times. ” Successful democratization in Iran”, he observed,” would more likely require a disruptive revolutionary route.” Boroumand:” If Parsa is correct, Iran today contains no common ground for dialogue and progressive change. “In the late 1990s and early 2000s, reformists strove to strengthen civil society, reduce repression, enforce the rule of law, and expand democratic freedom. Yet the conservative wing of the theocracy blocked them, drawing strength from the state’s theocratic ideology, with its blunt rejection of democracy or genuine popular empowerment.

The ruling oligarchy’s manipulation of the voting results in 2009 “signaled that reform within the bounds of the system was impossible, insisted Parsa. Shia Islam, the cornerstone of the revolutionary project, suffers today from massive defections and lack of interest, argues Boroumand.”Despite generous government funding, Parsa points out, more than half of the country’s mosques had become inactive by 2009.Over the years, state agencies and religious groups that promote Islamic culture have received billions of dollars. Yet, an ann official survey in 2000 found that three-quarters of all Iranians (86 percent of students) failed to say their obligatory prayers. Despite punishment for alcohol use that include eighty lashes for a first offense and death for a third, Iranians spend 12 billion US dollars a year on liquor. More than 74 percent of students surveyed, writes Parsa, admitted to engaging in “impermissible relationships with the opposite sex”. The clerical oligarchy’s politization of the economy and its handing of large chunks of it to the Islamic Revolution Guard Corps have turned even routine criticism into a national security threat, notes Boroumand. Para reports that Iran, judged to be one of the most corrupt nations on earth, went from being the world’s 54th most wealthy country (as measured by GDP per capita) in 1976 to being its 95th wealthiest in 2009 even before international sanctions against the Islamic Republic’s nuclear program  had begun to bite. And despite oil revenue going up sevenfold between 1979 and 2011, “a larger proportion of Iranians lived in poverty than before the revolution. «The current uprising” reported the “New York Times”, has not only been able to survive weeks of crackdown attempts, it has also grown and taken a tone directly threatening the country’s theocratic leadership; the women burning their hijabs, campuses erupting into protests and marchers chanting “Death to the dictator” and “We don’t want an Islamic Republic”. It remains to be seen, cautioned “Der Spiegel”, whether the protest movement will be strong enough this time to destabilize the regime. Like the situation in Ukraine, wrote “Der Spiegel”, Western governments find themselves in a position of weighing any reaction to the Iranian protests the significant geopolitical risks such a response may entail. “Iran isn’t just any old country in the Middle East”, the German newsmagazine argued:” Its geopolitical importance outstrips that of almost all of its neighbors”. As the largest and most important Shiite country, Iran, and the Sunni -led Saudi Arabia, are the two strongest regional powers. Tehran’s confessional allies stretch from Syria to Bahrain, from the Hezbollah in Lebanon to the Houthi rebels in Yemen. The fact that it lies at the intersection of international smuggling corridors, writes “Der Spiegel”, “gives the regime significant blackmailing leverage, as does its increasingly tight relation with China and Russia”. Most of all  Iran is home to a nuclear program, the military dimension of which only became clear in the early 2000s.The violent protests in Iran are making the situation even more complicated for US President Joe Biden, who is desperately trying to convince Iran in Vienna- staged, eternal, nuclear treaty negotiations not to build the bomb, which will encourage Saudi Arabia to arm itself nuclear as well, and  will put Israel on high alert .In the same breath the President’s more liberal supporters are demanding a clear and tough condemnation   of Iran’s violent acts against its protesting  citizen. A Shakespearean question, to be or not to be, nuclear abstention or a nuclear armed Iran? Along with Russia’s invasion of Ukraine, stated “Der Spiegel”,” the tensions surrounding Taiwan and North Korea’s nuclear program, Iran is one of the most dangerous crises of the present day.”