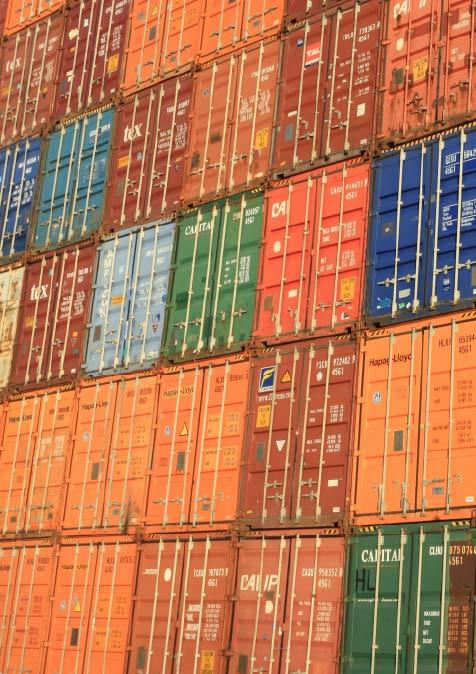 In a global context shaped by a three-dimensional crisis: the Covid-19 crisis, the climate change crisis, and the Russia-Ukraine war, the issues of connectivity, value chains, and the green transition are at the heart of the current policy debates all over the globe. In this regard, the Policy Center for the New South has organized, jointly with the Istituto Affari Internazionali (IAI), a conference on November 2nd, 2022, under the theme “Connectivity, Value Chains, and the Green Transition: Promoting Multilateralism and Sustainable Growth Across the Shared Mediterranean Space”.

The first panel of the conference was dedicated to the presentation and discussion of the paper of Professor Michael Tanchum entitled “The Food-Energy Nexus in the Western Mediterranean: Opportunities and Challenges for Creating Sustainable and Resilient Food Production Value Chains”.

The “regionalization of globalization”, is an opportunity for creating more resilient value chains in the Mediterranean area

One of the significant repercussions of the Covid-19 pandemic and the Russia-Ukraine conflict was the disruption of global value chains. Establishing more resilient value chains has become a pressing need in this context. Professor Tanchum highlighted in this respect the importance of forging solid Mediterranean cooperation to build sustainable trans-Mediterranean value chains and enhance connectivity in the region. As stated by Dr. Tanchum, this can only be fulfilled through the combination of the development of transportation networks and the anchoring of a solid industrial base.

In line with Dr. Tanchum’s statements and from a maritime economics perspective, Professor Massimo Deandreis presented interesting data that illustrates the regionalization trend and the economic potential in the Mediterranean region. The data show that there has been a rise in intra-regional trade and an increase in nearshoring and reshoring that started before the pandemic and is expected to persist in the upcoming years.

I believe that these trends, surcharged by the considerable implications of the Covid-19 crisis and the Ukrainian war, can be a valuable opportunity to reinforce the connectivity of the Mediterranean region. This was suggested by Professor Deandreis’s presentation showing as an example that in this context, a new record of more than 50 000 ships crossing the Suez Canal was broken last August, which emphasizes the expanding role of the Mediterranean area and its geoeconomic potential in the global economy. Finally, according to Dr. Deandreis, this opportunity can be seized through substantial engaging investments in ports, logistics, energy, and enhancing the development of special economic zones.

The Food-Energy Nexus Security Being Fragilized by the Climate Change Crisis: Renewables and Fertilizers as an Answer?

Professor Tanchum’s paper has also focused on the impact of the climate change crisis on the food-energy nexus and the role of the Mediterranean collaboration in this direction. In his presentation, Dr. Tanchum explained that climate change caused soil degradation and water scarcity. This resulted in decreased food availability due to the decline in production and rising competition over water resources and arable land, which is likely to increase instability and conflict in the most affected regions.

The situation in North Africa is quite alarming due to the water crisis, as shown by Dr. Tanchum’s presentation, despite the efforts made by the countries’ governments in this direction. Thus, the key to these issues lies in engaging more investments in renewable energy and mainly green hydrogen systems, part of which should be used to power desalination plants and water production infrastructure and produce more fertilizers—finally, Pr. Tanchum highlighted the role that can be played by Mediterranean cooperation in this regard. This point was emphasized by Professor Larabi Jaïdi, who made a fascinating comparison between the automotive and food sectors. According to him, the similarity between the two sectors lies in their significant dependence on energy and the necessity of a green transition. However, these two sectors differ in their development modality in the value chain. While multinationals dominate the automotive sector, the food sector is exceptional, given its vital role in human needs. It is then essential to develop cooperation in this sector primarily by defining a coherent standard agricultural policy between the two shores of the Mediterranean.

Overall, the paper presentation and the discussions of the first panel provided outstanding insights on establishing solid cooperation in the Mediterranean area in facing the challenges imposed by the current context and turning them into valuable opportunities for the region.

The second panel of the conference: “Energy and food connectivity in the Mediterranean: harnessing the green and digital transitions to promote sustainable growth and integration” aimed to discuss Afaf Zarkik’s paper under the title of “Gas Crisis in Europe: A Harbinger of Sustainable Cooperation with North Africa”.

In fact, since February 2022, the world has been confronted with a darker energy outlook, supported by the outcomes of the war in Ukraine. In Europe, Gas made its way into the priority list of energy concerns, and reliance on Russia is amongst the most urgent goals for the continent.

Gas in Europe: A path that looks past the Russian reliance and introduces North Africa

One of the essential topics highlighted in Mrs. Zarkik’s presentation was Europe’s energetic path and it’s positioning today regarding Gas. Among the alluring ideas advanced by the author was the highlight of the North African path forward as a relevant partner for the European Union to capitalize on investing in green energy and energy efficiency, working side by side. The context mentioned above of the war in Ukraine made Europe more receptive to solutions that leverage energy transition, primarily through the REPowerEU program that builds upon three major principles relying on achieving energy savings, producing clean energy, and diversifying energy supply sources. (1)

Another purpose served by Mrs. Zarkik’s presentation was to bring relief in terms of the European reliance on Russian gas, which is set to decline based on the setback in Europe’s Gas demand in the upcoming years. The relevancy of this view is, in my opinion, confirmed by the second affirmation regarding North Africa’s congruence in Europe’s energetic plans by further investing in green energy as well as energy efficiency to leverage its relationship with the European Union.

The views of Mrs. Zarkik were relevant not only via the RepowerEU program but also through the Fit-for-55 program, aiming to reduce 55% of GHG by 2030, the EU green deal, as well as the IEA Net Zero report.

Food security and Energy dependency, is it time to leverage inter-collaborations?

Following Mrs.Zarkik’s compelling presentation, Dr.Zegzouti’s ideas and points of view shed light on the importance of technology as a focal point in realizing an efficient and effective energy transition. Today, the problems faced by countries of different regions are heterogenous, ranging from the importance of tackling Food Security in Africa, as is the case with the wheat shortage in Egypt, to coming up with innovative solutions regarding ensuring a sufficient energy supply in Europe.

In my opinion, one of the most unique solutions highlighted by Dr.Zegtouti, were (1) taking advantage of the advancements in Artificial Intelligence, and (2) considering opportunities of collaboration between countries, that can be driven form the use of fertilizers, environment friendly solutions such as biotechnology as well as facilitating increased trades.

These solutions are pedestals for tackling Climate change and reinforcing energy transition. However, financial funding remains a primary concern for the effective use of these technologies and potential collaborative perspectives. Dr. Alessandri also highlighted this concern and pointed out the limitations of government funding in energy transition projects’ financing. But to what extent can the private sector contribute to the energy transition path of these countries?

Accordingly, Dr.Zegzouti’s presentation didn’t fail to mention collaboration projects, with results that never saw the light of day. One of them is Desertec[1], a project that was canceled due to several factors, among which lack of concrete results and geopolitical implications were highlighted. My opinion, as well as one of several attendees, aligns with the perception that current technological advancements could play a significant role in the potential success of similar projects today, especially given that electricity storage was one of the critical issues addressed in the Desertec project. Although skepticism is to remain around geopolitical concerns, the project’s second run could still be considered, thanks to the technologies developed between 2015 and today.

Amid the importance of collaboration perspectives that were laid out in both presentations of this second session of the event, I do believe that significant problems, such as the ones of financial funding and geopolitical implications, continue to have a weighing impact on the accomplishment of efficient and synergetic collaborations, to reduce dependencies, whether they’re based-on food or energy, as well as creating a supportive environment to conduct an efficient energy transition.

[1] Desertec aimed to produce clean electricity for the European countries from the vast concentrating solar power (CSP) impmlementd in the North African desert as well as in the Middle East.