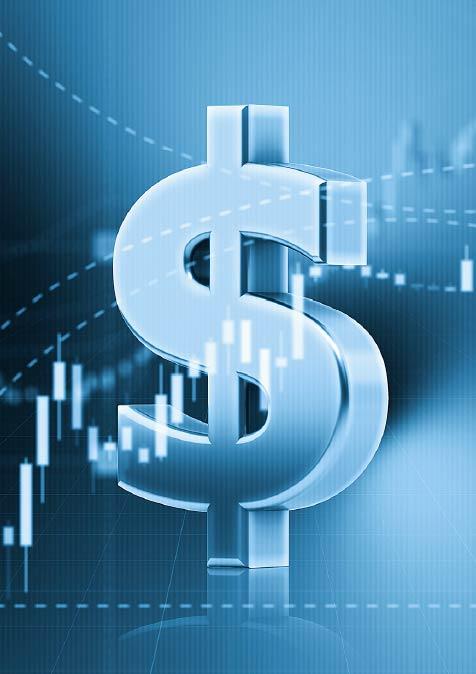 The heavy financial sanctions on Russia after the invasion of Ukraine sparked speculations that the weaponization of access to reserves in dollars, euros, pounds, and yen would spark a division in the international monetary order. China would tend to strengthen its own international payments system and accelerate the establishment of its currency – the Renminbi – as a rival reserve currency to reduce its vulnerability to moves of a similar nature against it. Countries facing geopolitical risks in their relationship with the United States and Europe would seize the opportunity to switch out of the dollar system. However, there is a way to go between willing and doing in this case...

Last Thursday, the International Monetary Fund (IMF) released a study (Arslanalp et al., 2022) on the evolution of international reserves since the beginning of the century. The “dollar dominance” appears in its weight in global markets. The US dollar's share of foreign trade invoicing and international debt issuance and non-banking transactions is well above what the country's shares of international trade, international bond issuance, and cross-border borrowing would suggest.

The dollar dominance remained despite the falling share of US GDP in the global economy. From the 1970s onwards, it survived the end of gold convertibility and the fixed exchange rate regime inherited from Bretton Woods. Its presence in banking and non-banking transactions even grew after the 2007-08 global financial crisis.

The IMF report shows a reduction in the degree of "dominance” with the dollar's share of central bank reserves falling since the beginning of the century, down 12 percentage points from 71% in 1999 to 59% last year. Not in favor of the pound sterling, the Japanese yen, or the euro - despite the rise that the latter experienced during its first decade of existence (Figure 1). Instead, in favor of what the IMF's work called “non-traditional reserve currencies” (Australian dollar, Canadian dollar, Swiss, and others), including the Renminbi, which reached 2.6% of the total. 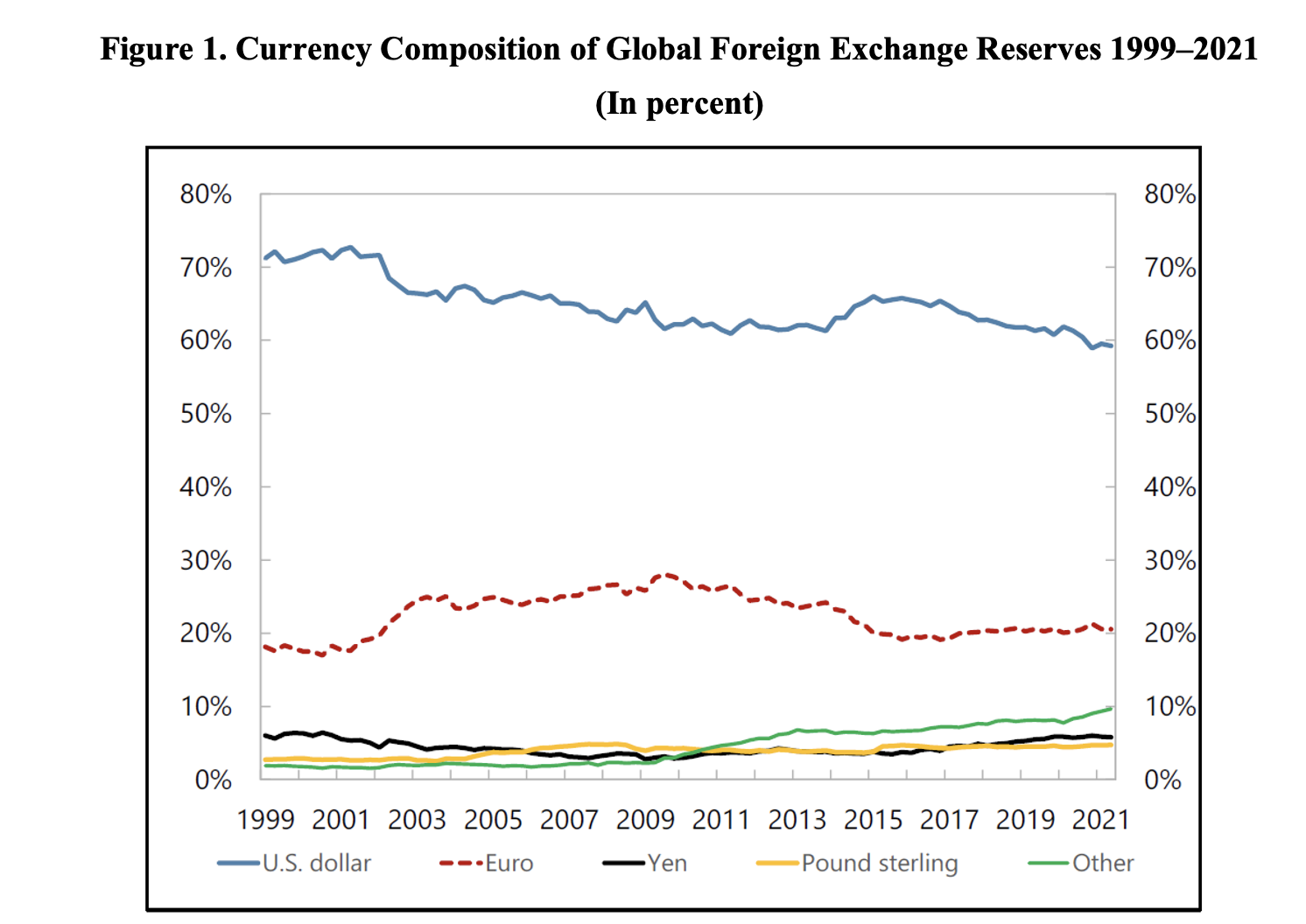 Note: The “other” category contains the Australian dollar, the Canadian dollar, the Chinese renminbi, the Swiss franc, and other currencies not separately identified in the COFER survey. China became a COFER reporter between 2015 and 2018.

Four gravitational factors favor the continuation of the dollar's central position in international financial markets, in trade invoices and payments, and in public and private foreign exchange reserves – call it “network - complementarity and synergy - effects.” The relative expansion of the other currencies depends on how successfully they manage to offset those factors.

First, the more extensive installed base for dollar-denominated transactions favors the currency. The increase in liquidity and the reduction in transaction costs in the “non-traditional” foreign exchange markets – including technological improvements in platforms – helped reduce this disadvantage.

In addition, no other monetary system offers an equivalent volume of “investment-grade” government bonds as the United States does. That volume allows central banks to accumulate  reserves and private investors to use them as a “haven”, something reinforced by the “quantitative easing” since the global financial crisis. In this regard, the announcement by the then President of the European Central Bank, Mário Draghi, in the euro crisis in 2012 - that he would do “whatever it takes” as a last-resort provider of liquidity for euro-denominated assets issued in the eurozone - was important. Furthermore, the European Recovery Fund was created last year. The global supply of liquid and safe-haven assets usable as central bank reserves tended to widen, in favor of the euro.

Third, it is also worth noting that “non-traditional currencies” were favored by a partial search for returns in reserve management. Central bank balance sheets – of both advanced and emerging economies – have taken on enormous proportions in recent times. Now, some of them separate what would be the appropriate tranche for “liquidity management” (the reason why there are reserves in liquid and low-risk assets, with the purpose of stabilization), from another “investment tranche” (possible to be allocated in less liquid but more profitable assets). The search for diversification helped “non-traditional” reserves.

The fourth gravitational in favor of the dollar would be the absence of regulations restricting liquidity and asset availability, including capital controls. Despite the sanctions already applied in cases such as Iran, Venezuela, and Russia, there is a difficulty here for Chinese bonds compared to those in dollars and the other three major currencies.

Since the global financial crisis, China has sought to extend the use of the Renminbi in international trade and as a reserve asset at other central banks. This was followed by a proliferation of foreign exchange swap lines with other countries.

However, as we have already noted here, while trade transactions and reserves by central banks and other global public investors may reinforce the Renminbi's position as an alternative currency to the dollar, euro, yen, and pound sterling, the qualitative leap toward the internationalization of the Chinese currency as a reserve currency will only occur when confidence in its convertibility is sufficient to convince unofficial (private) investors to keep reserves denominated in it. It is not by chance that the currency swap lines with China have been little used, while those of the countries with the Federal Reserve have been activated in times of need to stabilize flows.

The reserve issuer must accept that large amounts of its currency circulate the world and, therefore, that foreign investors have some weight in determining domestic long-term interest rates and the exchange rate. By all indications, Chinese financial authorities do not appear to be considering relinquishing controls as a priority on the immediate horizon. They will likely seek to expand the use of the Renminbi to the extent that this can be done without relinquishing controls and, therefore, without the ambition to build some parallel regime or substitute for the existing one.

In recent weeks, portfolio foreign capital movements into China are illustrative of what is at stake and the potential costs for China of rushing out of the existing regime. Data released by the Institute of International Finance (IIF) also last Thursday revealed an unprecedented large outflow of portfolio (debt and equities) capital from China in the wake of the Russian invasion of Ukraine and sanctions. At the same time, such flows remained stable in other emerging economies (Figure 2). The timing suggests that it had some correlation not with domestic difficulties with the country's property sector or other reasons but rather with the war in Ukraine and sanctions. We do not think it is opportune for China to issue any signs of a sudden departure from the system where it currently operates, nor of a possible collaboration with Russia to help the latter circumvent the sanctions imposed on it.

The relative dominance of the dollar appears to be declining but at a very gradual pace.