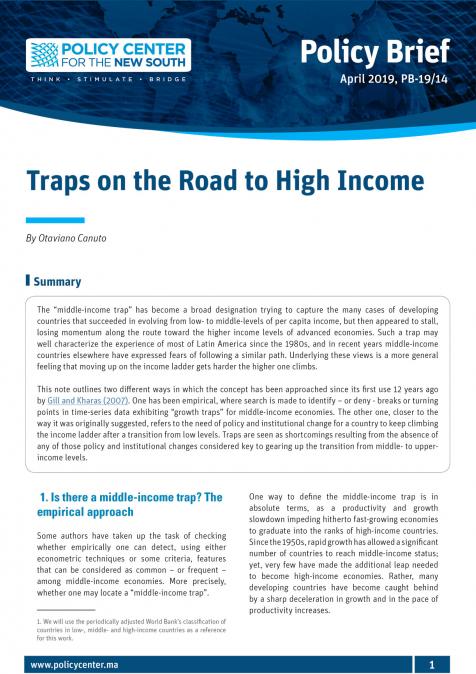 The “middle-income trap” has become a broad designation trying to capture the many cases of developing countries that succeeded in evolving from low- to middle-levels of per capita income, but then appeared to stall, losing momentum along the route toward the higher income levels of advanced economies. Such a trap may well characterize the experience of most of Latin America since the 1980s, and in recent years middle-income countries elsewhere have expressed fears of following a similar path. Underlying these views is a more general feeling that moving up on the income ladder gets harder the higher one climbs.

This note outlines two different ways in which the concept has been approached since its first use 12 years ago by Gill and Kharas (2007). One has been empirical, where search is made to identify – or deny - breaks or turning points in time-series data exhibiting “growth traps” for middle-income economies. The other one, closer to the way it was originally suggested, refers to the need of policy and institutional change for a country to keep climbing the income ladder after a transition from low levels. Traps are seen as shortcomings resulting from the absence of any of those policy and institutional changes considered key to gearing up the transition from middle- to upper-income levels.