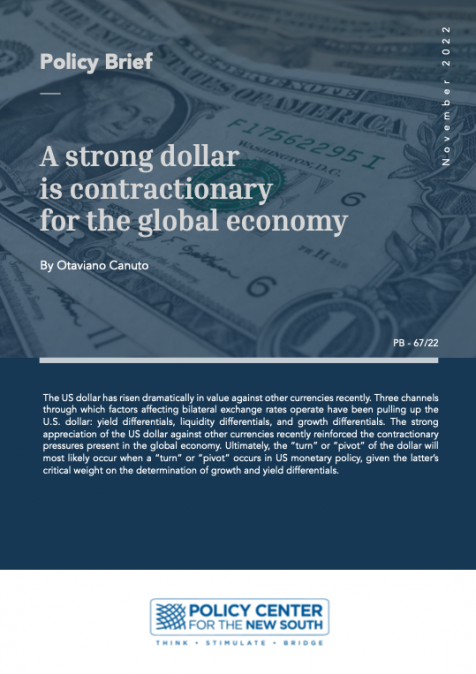 The US dollar has risen dramatically in value against other currencies recently. Three channels through which factors affecting bilateral exchange rates operate have been pulling up the U.S. dollar: yield differentials, liquidity differentials, and growth differentials. The strong appreciation of the US dollar against other currencies recently reinforced the contractionary pressures present in the global economy. Ultimately, the “turn” or “pivot” of the dollar will most likely occur when a “turn” or “pivot” occurs in US monetary policy, given the latter’s critical weight on the determination of growth and yield differentials.

The US dollar has risen dramatically in value in the recent past. The US dollar value index against other global currencies, compiled by the Federal Reserve of Saint Louis, reached its highest level in the last 20 years at the end of September, declining this month (Figure 1). 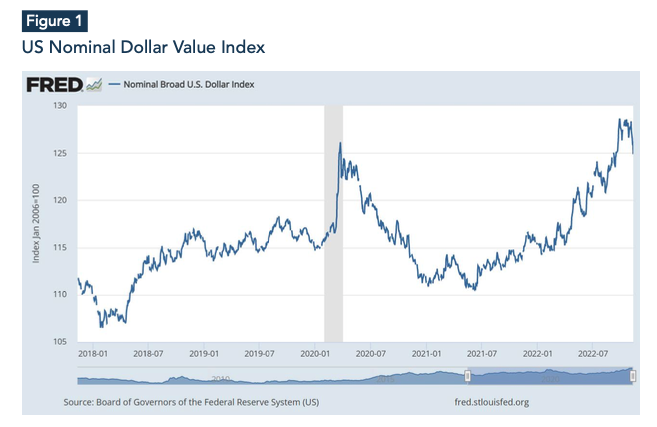 From January to mid-October, the dollar rose 13% against the euro, 22% against the Japanese yen, and 6% against emerging market currencies. The dollar appreciation was even steeper against other advanced economies than relative to emerging market economies. In Q3, a sell-off in almost all currencies except the U.S. dollar, Mexico’s peso, and Brazil’s real took place (Figure 2). 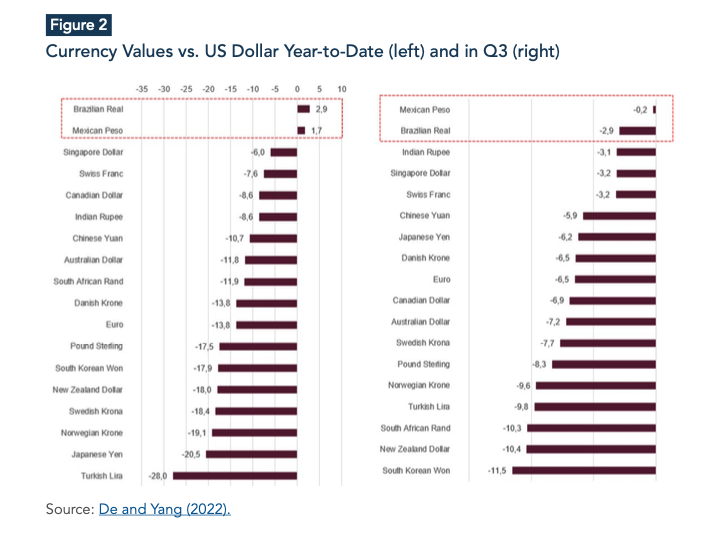 HOW TO EXPLAIN THE DOLLAR APPRECIATION

One may point out three different channels through which factors affecting bilateral exchange rates operate and have been pulling up the U.S. dollar (Bitel, 2022):

A major factor underlying the dollar’s appreciation is the higher yield in real terms of US assets relative to others. For example, the real yield differential between the US and the eurozone, as measured by five-year inflation-linked government bond yields, pairs well with the euro’s depreciation against the dollar (Figure 3). This differential reflected faster upward interest rate movements in the US, followed by the market’s conviction of the Federal Reserve Bank’s anti-inflation commitment, which was stronger than other central banks. 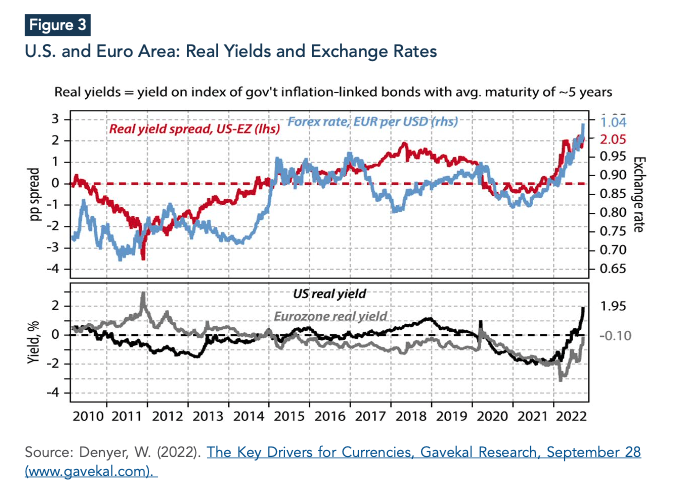 According to W. Denyer, a similar picture may be built more broadly to compare risk- adjusted rates of return for other fixed-income assets. Given the heights already attained by the dollar, further bouts of dollar appreciation might happen only if the other central banks continue to lag in setting interest rates and/or the pace of adjustment by the Fed accelerates even further. There are also always one-off events, such as the intense depreciation of the British pound caused by a proposal of unfunded tax cuts in October, a s later reversed.

The place taken by liquid investments in dollars as a “safe haven”, despite low returns, also increases their demand in times of higher risk perception and lower investor appetite to carry such risks in their portfolios. This is particularly the case relative to countries with high- risk premiums. In recent times, geopolitical risks, such as those arising from the Russian invasion of Ukraine, have contributed to the demand for dollars.

There were also, of course, peculiar one-off events. Like the sharp depreciation of the pound sterling when the British government proposed – then withdrawn – for tax cuts without evident funding coverage.

Levels of U.S. dollar liquidity have also mattered, regardless of whether it has recently become more expensive. There is no official metric for the availability of dollars, and Bitel (2022) proposes a proxy using the cumulative U.S. trade deficit, measured by the U.S. trade balance minus the U.S. petroleum balance and the U.S. trade balance with China. She justifies subtracting the trade deficit of the U.S. with China because the People’s Bank of China hoards the dollars accompanying them, and China’s capital account is closed (Canuto, 2022a). China’s U.S. dollars do not circulate as widely in the global economy as dollars held by other countries. 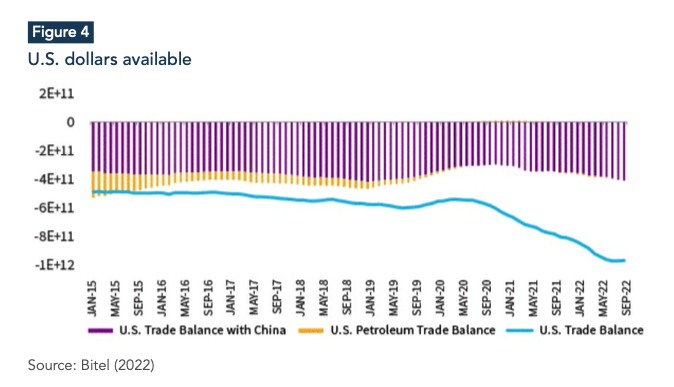 Europe cannot increase GDP without a significant increase in the cost of energy. The war in Ukraine because of Russia’s invasion and following sanctions on the latter have led to an eightfold increase in gas and electricity prices in Europe. The idiosyncratic character of the European energy crisis and the high probability of a deep recession has negatively affected the euro.

The growth differential between the U.S. and Europe has also had an impact on exchange rates (Figure 5). Both are strong, trusted currencies underpinned by large economies with well-developed institutions and deep financial markets. However, growth prospects have favored the dollar relative to the euro. 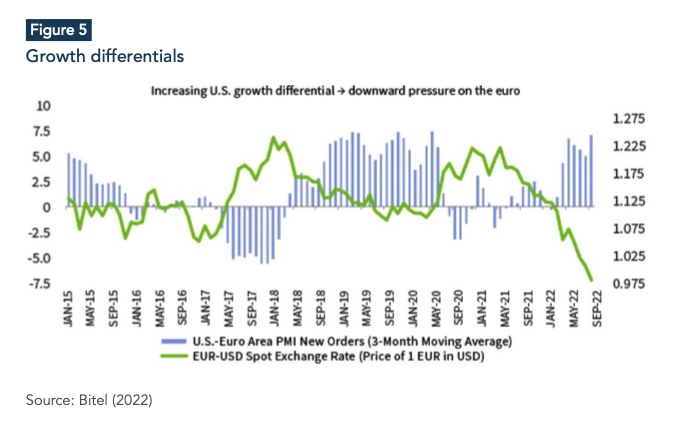 Whither the U.S. dollar?

What could then happen to the U.S. dollar ahead, judging by those determinants of bilateral exchange rates?

The ongoing Fed’s tightening may lead to a U.S. recession, with three possible scenarios as we have approached before (Canuto, 2022b). However, similar paths of growth deceleration are likely in other areas, as it is the case in Europe, the UK, Japan, and others.

China, in turn, faces its challenges in ramping up growth rates (Canuto, 2022c). Not by chance, the US dollar index weakened in the beginning of the month as rumors about a China reopening circulated since the stiff zero-COVID policy pursued in China has been a dampening factor upon its macroeconomic performance (Westbrook and John, 2022).

Yield differentials, in turn, may increase or decrease depending on how inflation rates evolve in different zones. If the Fed decides to pause its campaign of interest-rate increases in the beginning of 2023, yield differentials will stop improving. The U.S. dollar would no longer appear so attractive relative to other currencies and carry trades could unwind. But that will also depend on what happens with inflation and monetary policies elsewhere.

What about the availability of U.S. dollar liquidity? That will depend on the evolution of the U.S. current-account deficit, which will depend on growth differentials.

Whither the U.S. dollar goes will therefore depend on relative economic growth and the decisions of central bankers. Divergence from current trends in growth, liquidity, and yields could set the dollar on a different course. Ultimately, the “turn” or “pivot” of the dollar will most likely occur when a “turn” or “pivot” occurs in US monetary policy, given the latter’s essential weight on the determination of growth and yield differentials. Then the decline so far in November might indicate that the U.S. dollar has left its peak behind.

IMPLICATIONS OF THE DOLLAR APPRECIATION

The strong appreciation of the US dollar against other currencies in the recent past reinforced the contractionary pressures present in the global economy. On the one hand, in the US, exchange rate appreciation acted in the direction of mitigating local inflation. However, considering the low relative weight of trade in the US GDP, nothing close to stopping domestic inflation on its own.

On the other hand, economies already facing rising domestic inflation had additionally to experience the local price increase of tradable products caused by the appreciated dollar and, therefore, greater pressure for monetary tightening. Of course, eventually, the devaluation has expansive effects on trade balances. There is however the phenomenon known as the “J-curve” effect: an initial loss before a gain follows. A country’s trade balance initially deteriorates after a devaluation of its currency, before recovering and at some point, outperforming its initial performance. Supply restrictions – including energy – tended to lengthen the bottom of this “J-curve” in many cases of devaluation against the dollar. There was, therefore, a predominance of the immediate contractionary and inflationary effect of currency depreciation against the U.S. dollar.

The appreciation of the dollar also has a compressive effect on economies that have high exposure to liabilities denominated in that currency. The dollar’s rise was more intense against the currencies of other advanced economies. However, even without going through such intense devaluation, emerging and developing economies with external liabilities in dollars found themselves more vulnerable.

This was the case for countries in Latin America, the Caribbean and Europe with public and private debt in dollars – not for Brazil, where the government has positive net assets in dollars and there are no significant currency mismatches on private balance sheets, in addition to the country being a net exporter of commodities. But it was the case of several other emerging and low-income countries dealing with external indebtedness (Sri Lanka, Zambia, Pakistan, Argentina, Turkey, and many others).

It is also worth noting the negative effect on the profitability of U.S. companies for which the income obtained abroad is significant. In addition to harming the profits of U.S. multinationals abroad the dollar-denominated foreign liabilities of emerging markets, one way or another, the appreciation of the dollar can lead to inflationary shocks in other countries and, thus, to tighter monetary policies. Restrictive policy feedback loops can always be triggered by a drastic and sudden appreciation of the dollar. The rally has evidently reminded everyone of such risks.

A rapidly appreciating U.S. dollar is particularly precarious for emerging market economies to the extent that they conduct a significant amount of their business in U.S. dollars.

WHAT TO DO IN THE FACE OF EXCHANGE RATE PRESSURE

There is an inherent challenge to the globalized economy. Each central bank looks to its own country, deciding monetary policies according to what it deems necessary to the local dilemma between unemployment and inflation. But in such an interdependent economy, the repercussions of any large country’s decisions go far beyond its borders. And come back. The probability of feedback from restrictive monetary policies is even more significant when they all respond to a common inflationary problem, as is currently the case.

Transmission via exchange rates is part of this interdependence. Higher interest rates in the U.S. end up imposing on others the choice between also raising interest rates and/or allowing capital outflows and currency devaluation to occur.

Some countries are turning to direct exchange rate interventions instead of raising domestic interest rates – or as a complement. Japan opted to sell reserves of US Treasuries to try to neutralize the yen’s currency devaluation against the dollar. Switzerland also said it was considering selling foreign currency to support the Swiss franc and raising interest rates between its central bank meetings.

The period after the 2008-2009 global financial crisis saw “currency wars”, when countries accused each other of exporting their unemployment problems through significant reductions in domestic interest rates and devaluation of their currencies. Could a “reverse currency war” be brewing right now, as the appreciation of the US dollar exports inflation to others?

Overall coordination took place in 1985, when, as of now, the dollar became overvalued. The “Plaza Agreement then signed between France, West Germany, the United Kingdom, Japan, and the USA, had as a successful commitment to the devaluation of the dollar.

However, at that time, US inflation was already on the decline after a long period of high domestic interest rates. At the same time, the current tightening of monetary and financial conditions in the US is still ongoing. The most likely scenario is the absence of equivalent agreements, with some countries striving to avoid pure interest rate adjustments through direct intervention in foreign exchange markets. The effect will be limited if the underlying factors driving capital flows and exchange rate pressure does not change.

Therefore, the “turn” or “pivot” of the dollar will likely occur when a “turn” or “pivot” happens in US monetary policy. In the meantime, as recommended by Gopinath and Gourrinchas (2022), the Fed should reopen the tap on precautionary lines of credit with other central banks – as during the pandemic – to avoid the risks of these being put against the wall in situations of sudden illiquidity in terms of dollars.