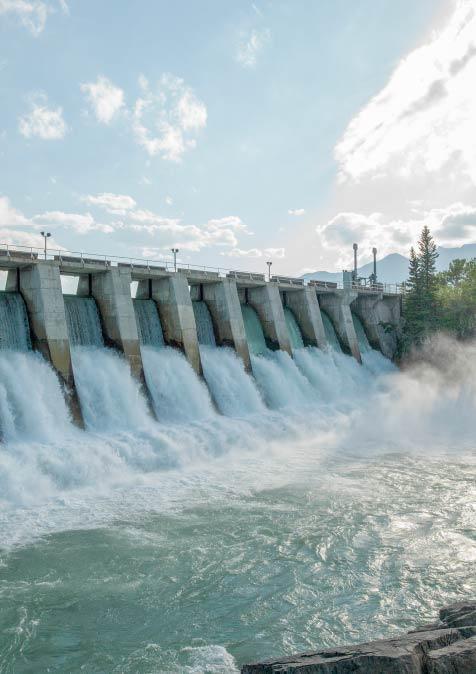 The start of 2022 has been marked by drought, with countries around the world experiencing abnormally low levels of precipitation and dryness over the last few months. On the African continent, the intensity and duration of the droughts is wreaking havoc on economies already struggling because of the pandemic. In the eastern part of the continent, drought threatened to put countries in the Horn of Africa “on the brink of catastrophe” as late as February. In the north, Morocco is experiencing one of the worst droughts in the last 30-40 years, devastating its agricultural sector.

The sobering reality of climate change is that droughts are an inescapable part of our future. This raises the importance of formulating robust drought policies to ensure economic and social resilience. At the heart of this need, lies a fundamental policy question: how can we improve our resilience to drought?

The dominant strategy has been—and largely continues to be—a focus on shoring up water supplies to ensure enough supply to meet current and projected demand. Water supply protection and expansion measures are especially evident during times of drought. Severe droughts often spur interest in inter-basin transfers, the construction of dams and reservoirs, the construction of desalination plants, and water infrastructure improvements to reduce leaks.

Alongside supply management, there has been increasing recognition in recent decades of the need to manage demand to encourage water conservation and efficient water use to make better use of water supplies, and to mitigate waste or misuse of water resources. Accordingly, official policies have generally incorporated language acknowledging its importance. In practice, however, demand management is typically used as an emergency brake during dire situations, instead of an approach to prevent dire situations to begin with.

A Predominantly Supply-Oriented Approach is Problematic

Though ensuring adequate water supplies is crucial to sustain life and economic development, there is a long list of reasons why a predominantly supply-oriented approach may not yield expected benefits or have significant environmental costs. Some of these include:

1- Measures focused on improving water supply may do little to alleviate drought in the short-term. Australia’s experience in the late 2000s serves as a cautionary tale. The Australian government invested billions of dollars in four desalination plants in an effort to diversify their water supply portfolio during the “millennium drought.” Most of these plants were completed after the end of the drought and have largely sat idle since their completion. In the meantime, maintenance and contractual charges have cost taxpayers hundreds of millions of dollars.

3- Some supply-side measures may have significant environmental costs beyond operating and capital expenditure costs. In addition to ecosystem impacts and habitat destruction related to dams, a study published in 2021 found that dams and reservoirs around the world produce greenhouse gas emissions equivalent to roughly 1.07 gigatons of CO2, more than previously estimated. This implies that building more dams and resources may seriously undermine strategies to honor sustainable development goals. With desalination, not only are greenhouse gas emissions an issue but brine disposal practices can have devastating ecological impacts, and are thus unsustainable in the long run.

There is no denying that supply-oriented measures are critical aspects of a region’s overall water security portfolio, and have a valuable role to play in addressing drought resilience. Focusing on infrastructure can be a good strategy, especially for regions with little storage capacity. However, as a society, we simply cannot afford to invest in expensive infrastructure that does not meet future societal needs.

The fundamental problem with a predominantly supply-oriented approach is that it presumes that water scarcity is a problem we can simply engineer our way out of and ignores some of the fundamental causes of water scarcity. True, climate-induced droughts are partially to blame. But droughts also lay bare the ways in which water is often misused, wasted, polluted, and under-valued. During non-drought years, for example, vast amounts of water are misused, resulting in the depletion of aquifers, rendering them useless during droughts.

The Other Side of the Equation: Water Demand Management

Demand management aims to maximize usage of a given volume of water by discouraging unnecessary or low-value uses of water through price-based or non-price-based mechanisms. Given the uncertainty of future water needs, demand management offers a potential solution that would allow for the conservation of considerable amounts of water in times of need and delay the need for expensive infrastructure. Demand management can also be used to reallocate water between sectors to make sure water is allocated where it is most needed.

Managing demand can be achieved through a variety of strategies including:

- Incentives for the installation of water efficient technologies (e.g., appliances, fixtures, or pumps),

In the agriculture sector, demand-side management strategies can also be used to encourage the cultivation of crops in a way that minimizes their water footprint, or investment to help the soil retain water better.

In practice, the wider implementation of water demand management is not without challenges. Despite growing recognition of the need for demand management, water managers generally avoid relying on it in practice because it intersects with social and political issues.

Aggressively pursuing conservation without customer buy-in may be met with social pressure and have political consequences. For example, commercial customers may oppose conservation as it may be perceived as being at odds with economic growth and development. Residential customers may perceive water-usage restrictions as a threat to lifestyles. Even water utilities face disincentives: less water sold means less revenue. It’s therefore no surprise that it’s often the preferred strategy to delay using demand-side management strategies in the hopes of rain to avoid potential public-relations problems, even though taking action earlier may lead to better results in the long run.

In large part, this explains why addressing drought resilience through infrastructure development (i.e., securing the necessary funding and permitting and then implementing) is typically more politically expedient than addressing governance or societal elements of water usage. Building infrastructure is a visible political act through which the state can show its constituents that it is taking action to solve the problem without asking for anyone to make short-term sacrifices.

Most people don’t think of water scarcity as an issue until they’re faced with the stark reality of potentially losing water services. As ‘day zero’ doomsday scenarios loom large, emergency restrictions and extreme rationing measures are put into place to avoid disaster. Once the rain falls and the danger passes, water scarcity becomes a problem of the past… until the next drought comes along: a phenomenon known as the hydro-illogical cycle. 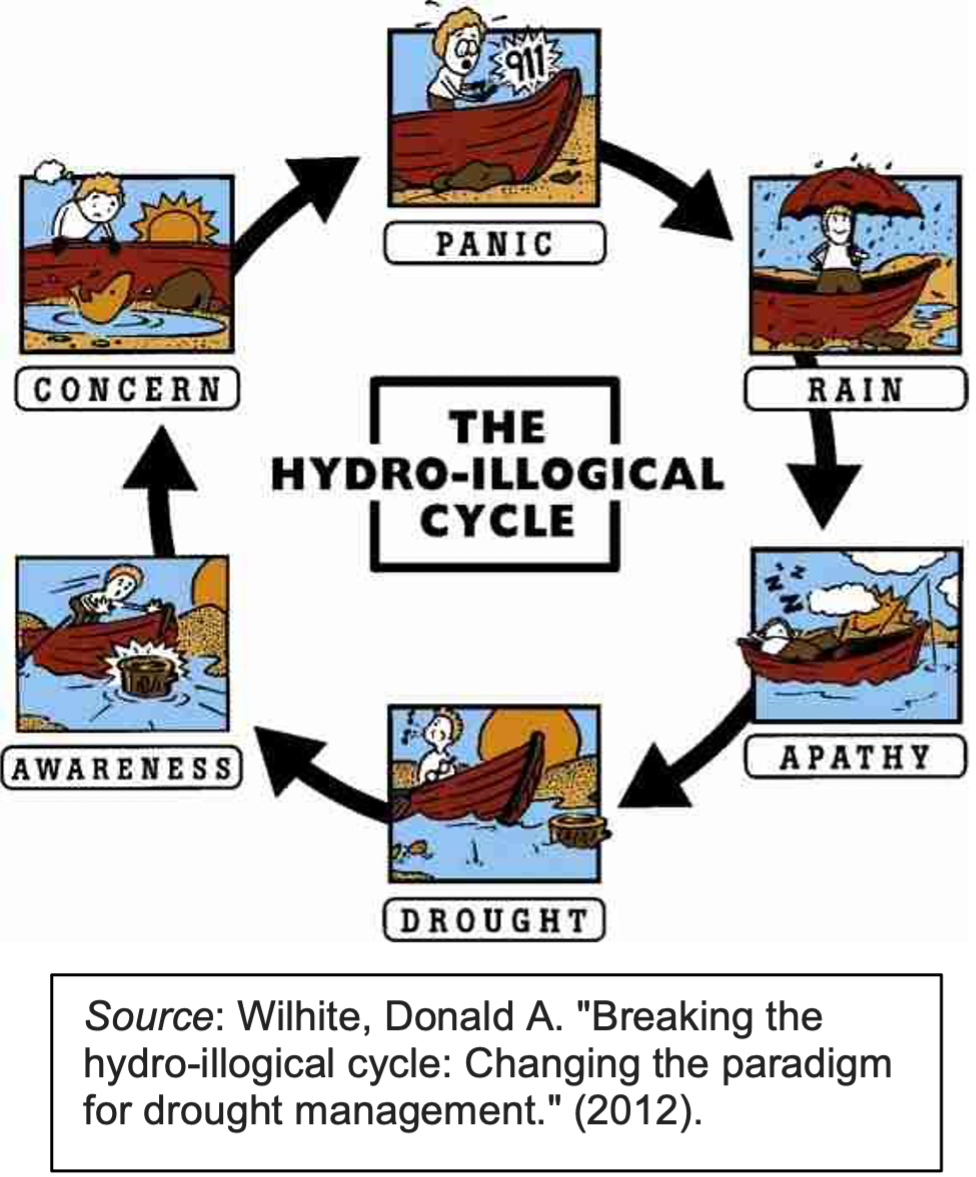 The major challenge for policy action is amassing the necessary political will to take action. In the water sector, these moments are rare and fleeting. As noted earlier, droughts can be catalysts for action. As a result of the current drought in Morocco, for instance, the government has announced plans for the construction of over 100 new hill dams and several desalination plants across the kingdom, and has mobilized funds for the upgrading of infrastructure to decrease technical losses. At best, demand management received only token recognition.

To my knowledge, the state of California is the only government in the world to have made a good faith effort to prioritize demand management in its water management policies. Ever since the height of one of the worst droughts faced by the state in the twenty-first century in 2015, California has been adopting a series of policies aimed at “making water conservation a way of life” in a way that highlights demand management and engages end-users to get buy-in from relevant stakeholders. I’m reluctant to point to any particular policy because solutions to water management are inherently local. However, the most important lesson from California in my opinion is that data can be leveraged to improve decision-making; state efforts have invested in data collection and research to understand how water is used and are deliberately using them to inform state policies for water conservation. California is a particularly good case study because of its municipal diversity (from large cities to small towns), its climatological diversity, and its economic diversity; it is a major business and agricultural economy that is chronically afflicted by water scarcity. Though far from perfect and a work in progress, California’s commitment to conservation is an example to which countries struggling with water scarcity should pay close attention and from which they should learn.

Demand management is not a silver bullet for water crises, but it is an important tool that needs to be seriously considered alongside, and sometimes instead of, supply-side policies. To invest wisely in the future of our water resources, we must consider both sides of the water resources management equation: supply AND demand. Prioritizing demand management is not only important for reducing the misuse of water resources, but also because it would represent a much-needed paradigm shift. It would represent an explicit acknowledgement that new climate “normals” are anything but normal. Failing to do so will keep us trapped in the perpetual search for ever scarcer water resources in an effort to slake an unquenchable thirst. As water scarcity and droughts increase in frequency, intensity, and duration, it’s time to seize the moment and follow California’s lead in trying to break the hydro-illogical cycle.

The author of this blog post, Dr. Ahmed Rachid El-Khattabi, is an ORISE Postdoctoral Research Fellow at the U.S. Environmental Protection Agency. He is an alumnus of the 2018 Atlantic Dialogues Emerging Leaders program.