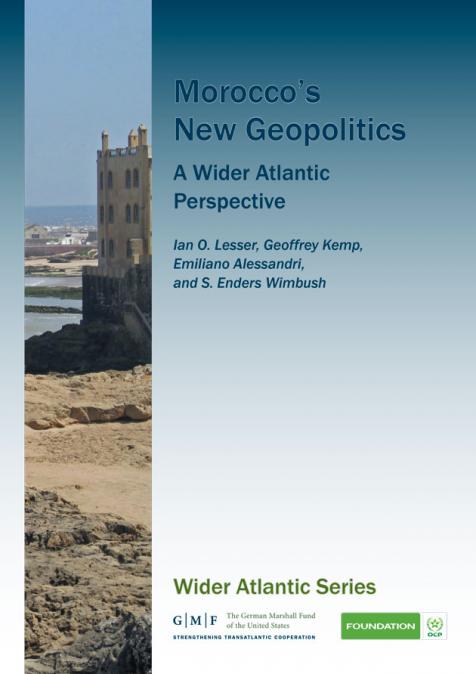 This study argues that Morocco should encourage policymakers in the United States and Europe to think more imaginatively about its role in the Atlantic and elsewhere.

Recent events underscore the reality that stability in Morocco’s neighborhood cannot be taken for granted. The implications of protracted instability in Morocco’s near abroad — the Maghreb and West Africa — would be substantial, adding to the opportunity costs of poor integration in the region, and strengthening the logic of an Atlantic vision. While continuing to pursue Maghreb integration, Morocco will also explore larger geometries in its international policy and economic development.

Some of these new geometries will emerge within the neighborhood, above all in West Africa, where new infrastructure could open opportunities for economic development, with Morocco as a hub for integration and commerce in the region. Looking beyond the immediate neighborhood, the area with the greatest future potential for Morocco as an international actor will be the wider Atlantic, including the southern Atlantic per se. For various historical reasons, the southern basin of the Atlantic has featured less prominently in modern transatlantic relations and international affairs.

This may be changing. From the rise of Brazil, South Africa, Nigeria, and even Angola as emerging economies, to developments in offshore energy production and trade, the notion of southern, or more properly, wider Atlanticism may finally come to the fore. Many of the key trends affecting global economics and security are being played out to the south of the prevailing Washington-Brussels axis. At a minimum, this prospect will give greater weight to north-south and south-south relations, and Morocco is well placed to serve as a hub in this wider Atlantic world — in logistical terms, but also in terms of the evolving mental maps of policymakers. This study argues that while it is in the interest of Morocco to consolidate relations with the EU and capture the potential gains from a reshaped European approach to its southern neighborhood, Rabat should also encourage policymakers in the United States and Europe to think more imaginatively about Morocco’s role in the Atlantic and elsewhere.

A first focus should be infrastructure, especially in the maritime and air realms, where the regional political obstacles are minimal. Existing projects, such as the intercontinental trans-shipment Tanger Med port, already highlight Morocco’s ability to serve as a hub for the region and the wider Atlantic. Ideally, national investments in road and rail infrastructure can also eventually contribute to wider regional integration in the Maghreb and West Africa. The completion of the much-discussed Trans-Maghreb Highway should be a key objective.

A second focus should be energy. Trends in energy trade and investment, offshore and shale gas production, and environmental policy may or may not add up to the emergence of an Atlantic energy “system,” but they will be consequential for global energy security and Morocco’s own development. There will be multiple opportunities for Morocco to participate in this increasingly significant Atlantic energy picture, and these will contribute directly to Morocco’s Atlantic vocation. Morocco’s large-scale investment in renewable energy production, and potential regional cooperation in this area, will be one key initiative.

On the security side, Morocco should work with partners in West Africa and Latin America to address the growing problem of trans-regional criminality in the Atlantic space. In the absence of an effective regional — actually trans-regional — strategy to contain this problem, Morocco will face the prospect of an increasingly unstable hinterland in West Africa and the Sahel, a more difficult relationship with European neighbors, and the threat of violent spillovers on Moroccan territory. As an exposed state with a stake in Atlantic cooperation, Rabat can take the lead in pressing for a multi-continent approach to this problem.

In a related fashion, a successful regional strategy for Morocco will be influenced by the nature and effectiveness of civil-military relations and security establishments across the Maghreb-West Africa space, especially in light of the revolutions and crises affecting the region. NATO is likely to make security sector reform in the southern Mediterranean a new focus for its Mediterranean Dialogue. Rabat can and should play an active role in this initiative, giving it a wider scope encompassing Morocco’s multiple neighborhoods. Human security, the control of borders, and air and maritime sovereignty and security should be priorities for cooperation and seem to be natural items of an emerging Wider security agenda.

Finally, internal reform can underscore the durability of Morocco’s distinctiveness, regionally and in the perception of Atlantic partners. This analysis does not focus on Moroccan domestic policy. But in a period of rapid and revolutionary change in the neighborhood, it is obvious that officials and observers will judge Morocco’s potential to play new external roles in large measure on the basis of internal conditions. The success of Morocco’s own reform efforts will be a key enabler in strengthening and diversifying Rabat’s international position.

Ultimately, pursuing a “portfolio approach” to Morocco’s international engagement may prove to be the necessary strategy for success for Rabat. Geopolitical scenarios highlights the extraordinary flux in the strategic environment across multiple regions. These uncertainties can affect the viability of regional infrastructure as well as geopolitical relationships (consider the effect of a closure of the Suez Canal on transits through the Tanger-Med port). Morocco will need to balance its European, Maghrebi, Mediterranean, West African, and Atlantic relations to hedge against risks from any of these quarters. Diversification should be the order of the day.

To the extent that Morocco aims to reinforce its Atlantic strategy, closer ties with Brazil and key African states will be an essential component — and a hedge against potential U.S. and European reluctance.