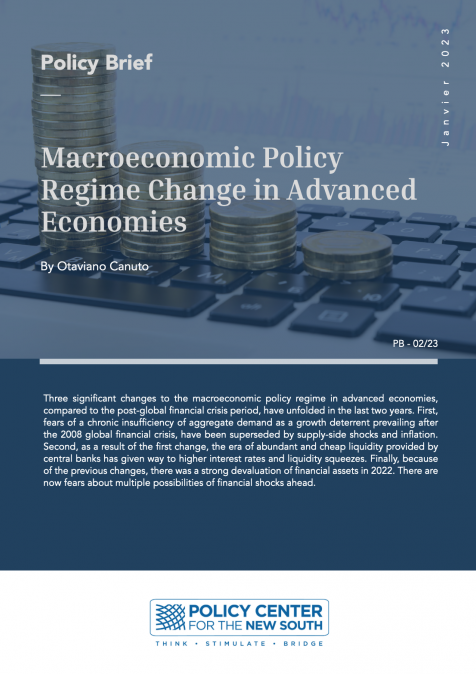 Three significant changes to the macroeconomic policy regime in advanced economies, compared to the post-global financial crisis period, have unfolded in the last two years. First, fears of a chronic insufficiency of aggregate demand as a growth deterrent prevailing after the 2008 global financial crisis, have been superseded by supply-side shocks and inflation. Second, as a result of the first change, the era of abundant and cheap liquidity provided by central banks has given way to higher interest rates and liquidity squeezes. Finally, because of the previous changes, there was a strong devaluation of financial assets in 2022. There are now fears about multiple possibilities of financial shocks ahead.

A triple structural change in the macroeconomic policy regime in advanced economies has taken place in the last two years, as compared to the post-global financial crisis period.

First, a chronic insufficiency of aggregate demand, identified as a growth deterrent prevailing after the 2008 global financial crisis, has been superseded by more frequent and significant supply-side shocks and higher inflation. Some believe that the era of ultra-low interest rates and low inflation is definitely gone, whereas others claim that such change is temporary and reversable.

Finally, because of the previous changes, there was a strong devaluation of financial assets in 2022. There are now fears about multiple possibilities ahead for financial shocks.

FROM INSUFFICIENCY OF DEMAND TO BLOCKAGES ON THE SUPPLY SIDE

Starting in 2021, inflation in the U.S. and in Europe rose to the highest levels in decades. U.S. consumer prices likely rose by about 7% in 2022, the highest in four decades. In Germany, 2022 ended with an inflation rate of 9.6% per year, very close to the first experience of double-digit inflation since 1951.

The surge is explained by succession of supply and price shocks (pandemic, war in Ukraine), while a robust recovery of post-pandemic demand was taking place. Now, rising interest rates are threatening to push the global economy into recession in 2023 (Canuto, 2022a).

Many analysts initially interpreted the inflation as ‘transitory’, a consequence of supply-side shocks that would be temporary and quicky reversible. Such a view has been replaced by another that acknowledges some role played by excess demand relative to supply capacity over a longer time period, which called for restrictive central bank policies to curtail demand. Now doubts are emerging about how high and for how long higher interest rates will have to go to soften labor markets, and prevail over the resistance in services inflation (Canuto, 2022b).

Are these symptoms of a business cycle like others? Or has some structural change happened that may lead one to conclude that the era of low inflation and low interest rates is gone?

In the years following the 2008-09 global financial crisis, sluggish economic growth was attributed to a chronic insufficiency of aggregate demand. Multiple hypotheses were established about a possible trend of secular stagnation present in advanced economies: hangovers from the financial crisis, income concentration, the exhaustion of the technological waves of previous decades, demographic dynamics, and others (Canuto, 2021a).

The long period of low interest rates (Figure 1), accompanied by a flood of liquidity from central banks through their quantitative easing programs (purchases of government bonds, mortgages, and, in the euro area, private assets) after the 2008-09 global financial crisis, offset the relatively low use of expansive fiscal policies. On the other hand, the fiscal policy signal changed significantly with the emergency support distributed by governments to households and companies during the pandemic. 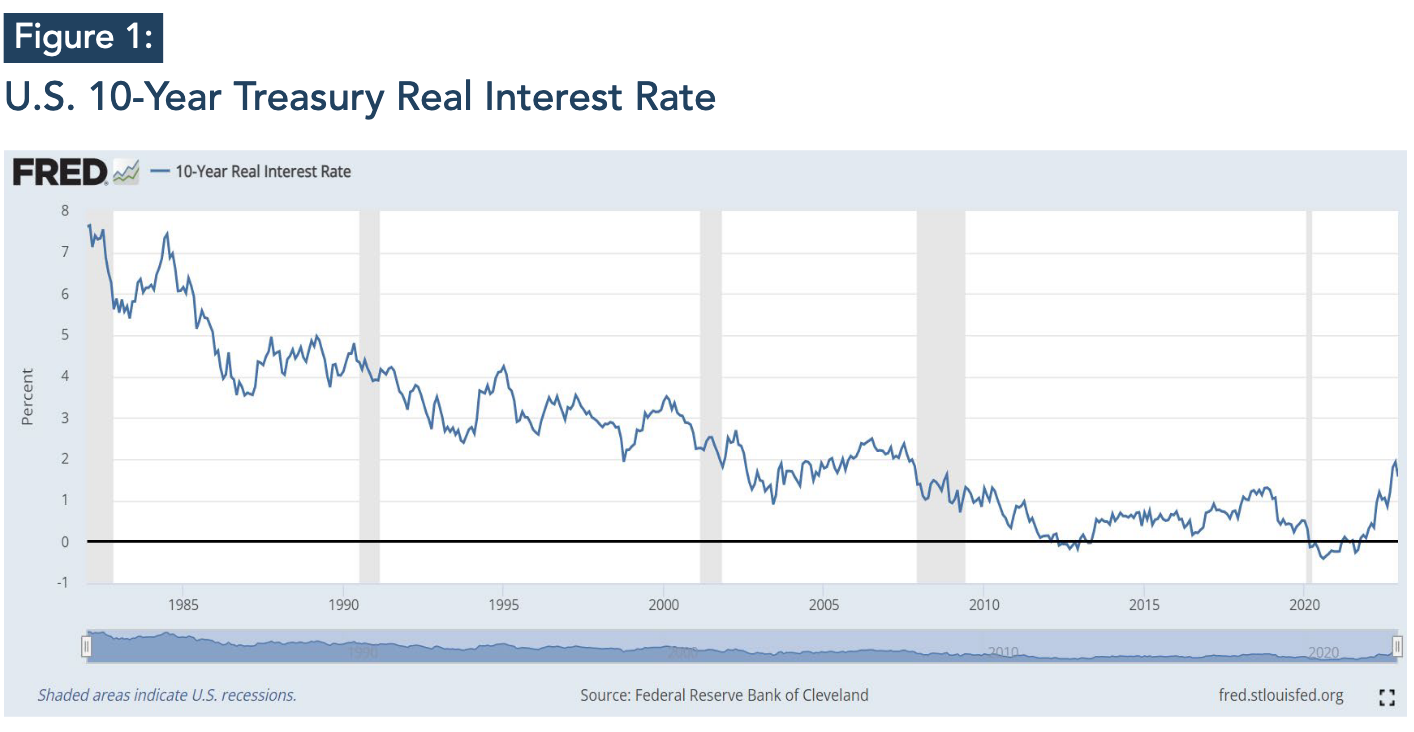 Multiple shocks started to place supply instead of demand as a difficulty. In addition to the interruptions in value chains during the pandemic, there has been a decline of labor-market participation, especially in the United States (‘The Great Resignation’). Certain segments of the population have left the labor force at unusually high rates, either by choice or necessity, making it harder for companies to find workers. This issue has been compounded by disruptions in global labor flows, as fewer foreign workers have received visas or are willing to migrate.

Such changes have accelerated the post-pandemic rewiring of some global supply chains in order to aim for more ‘friend-shoring’ and ‘near-shoring’. The perception of geopolitical risks and the greater frequency of adverse weather phenomena are leading companies to pursue resilience even at the detriment of cost efficiency. It is not clear yet how far and wide that move will be but, depending on the extent to which it occurs, less quantity-responsive and more price-responsive supply chains could tend to become the norm (Canuto et al, 2022).

The critical energy transition is also intrinsically inflationary (Canuto, 2021b). So, changes in the scope of globalization, labor shortages, and the consequences of climate change have increased supply challenges and put into question the belief on the continuity of an era of low levels of inflation and interest rates.

a. Inflation rates seem to have peaked in the U.S. and Europe (Figure 2). But the tightness of labor markets and the downward resilience of core inflation in services are potential dampening factors playing against a fast and significant move downward of inflation (Canuto, 2022b). 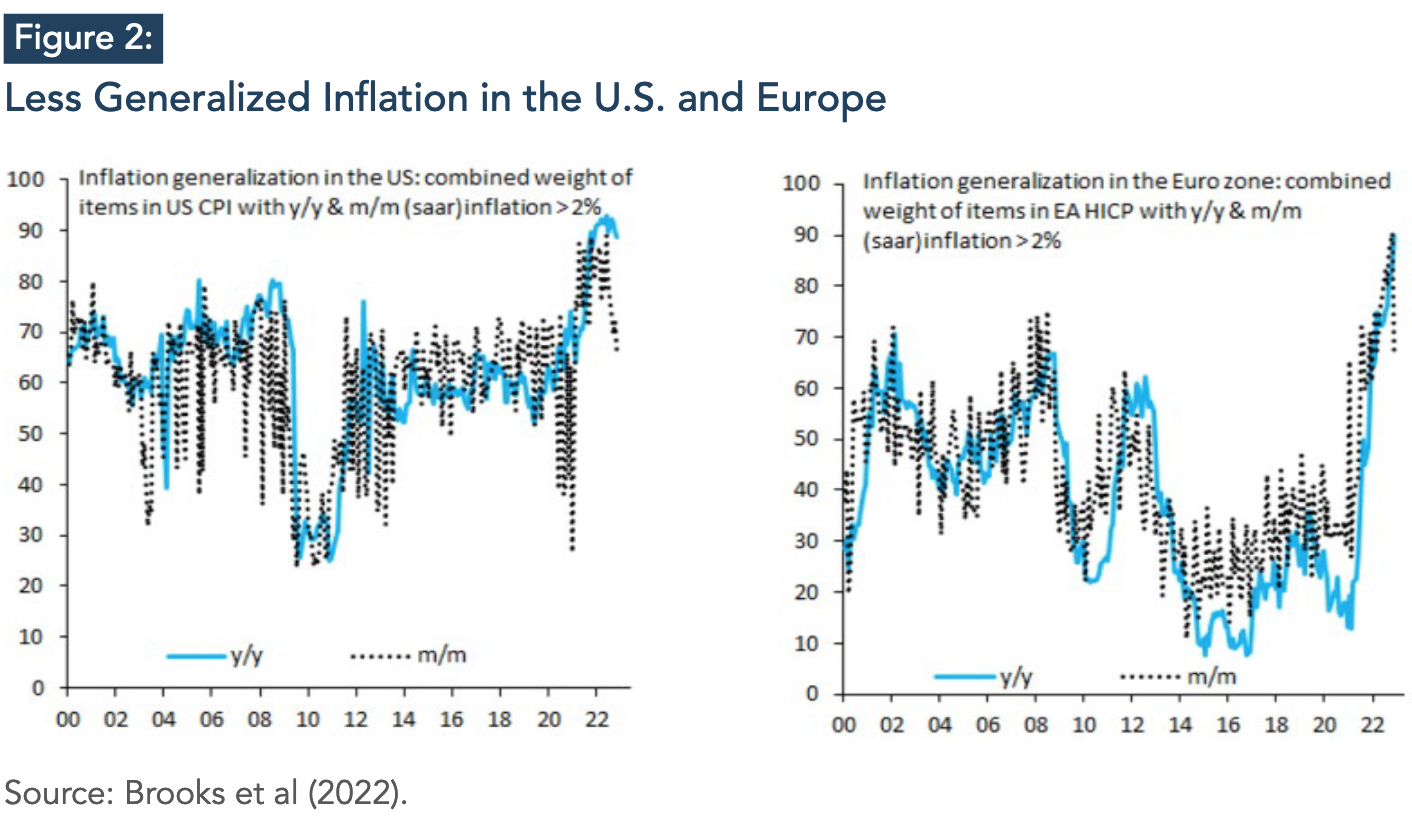 Mild or hard recessions loom ahead on both sides of the Atlantic. The inversion of the U.S. yield curve (Figure 3) suggests this to be the case. 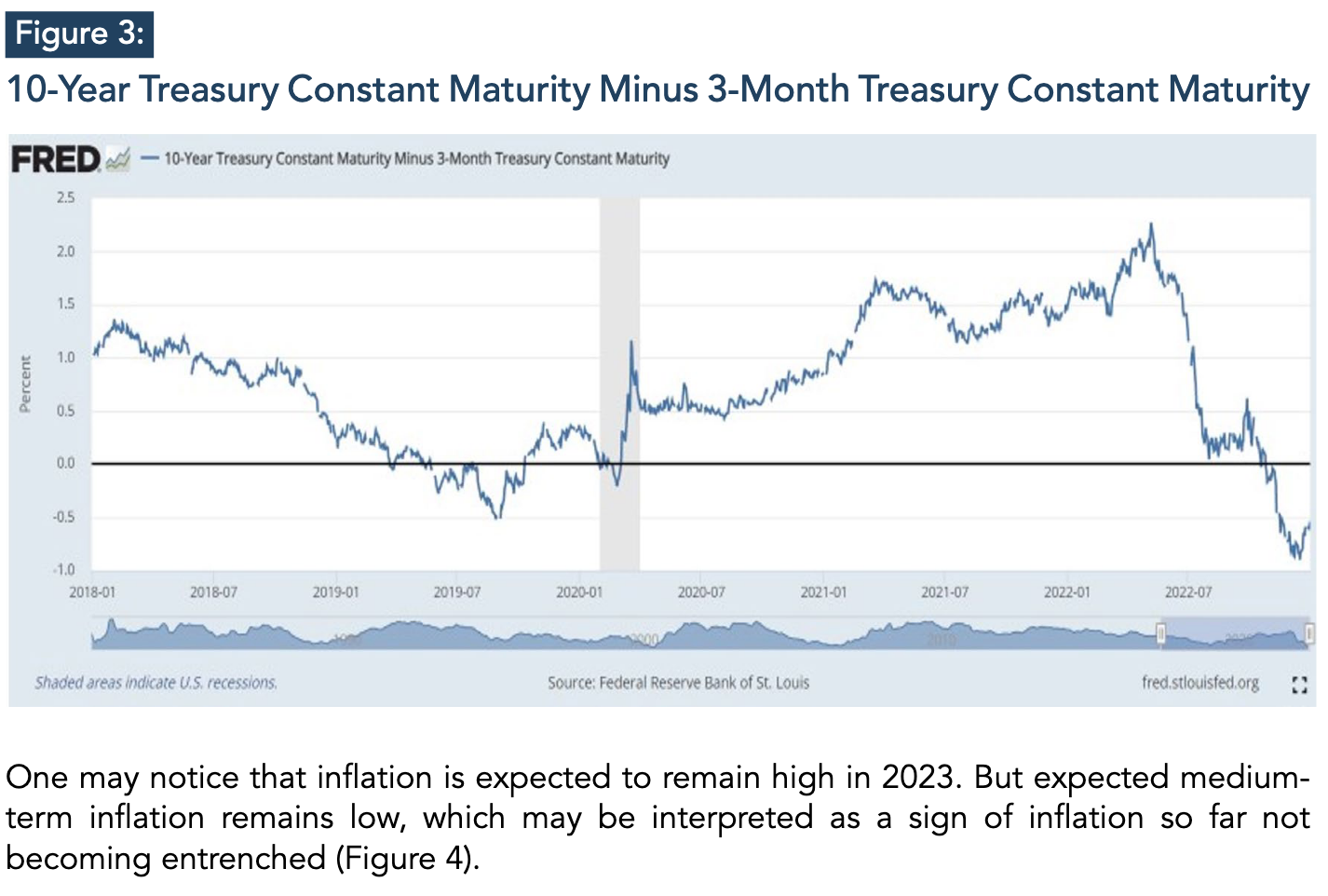 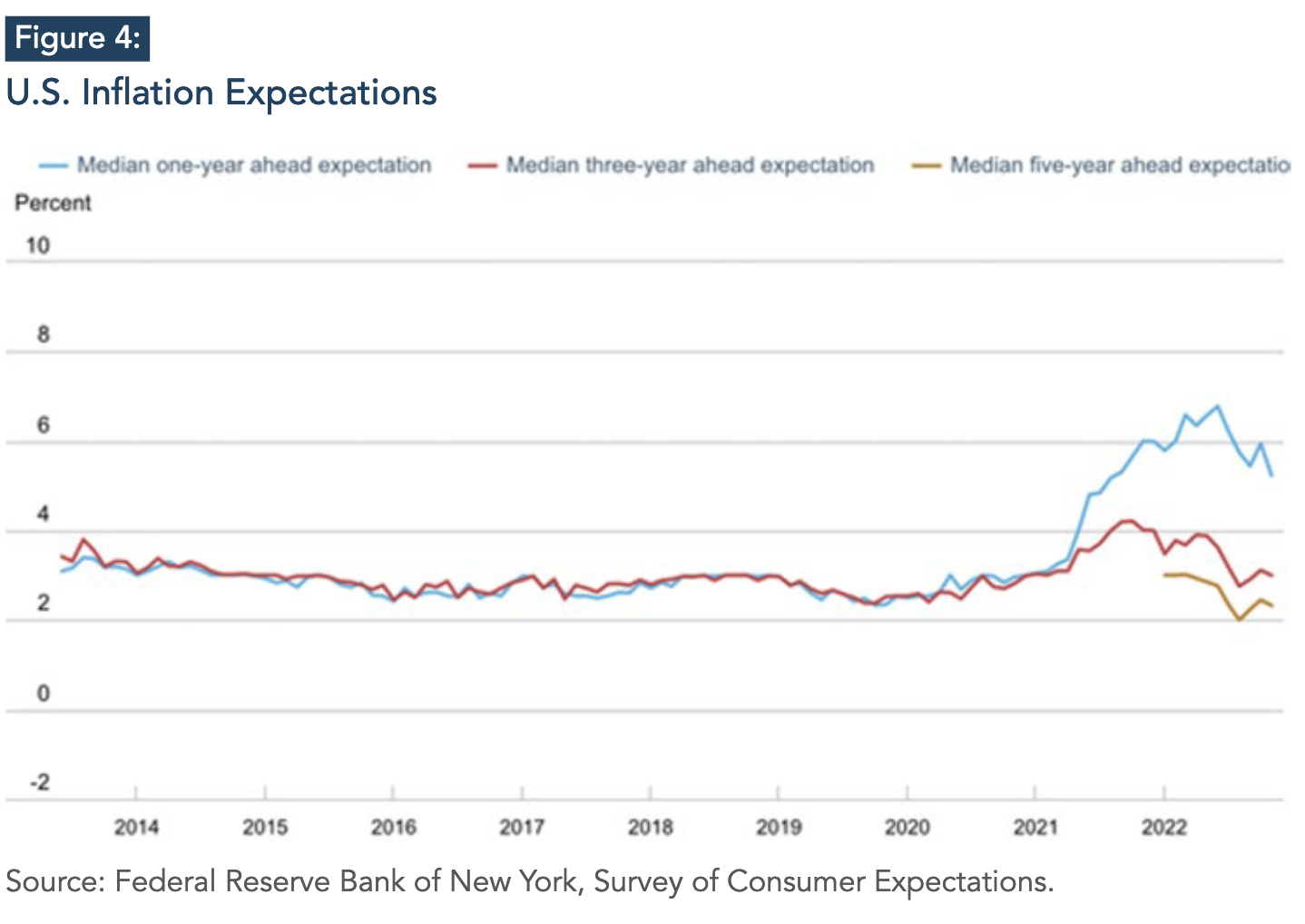 A divergence of views about the longevity of the regime change with respect to supply and demand follows. For instance, Goodhart and Pradhan (2020) argued that demographic dynamics and a retreat from globalization mean higher inflation and higher interest rates over the long term. In contrast, Blanchard (2022) believes that the factors that have led to low real interest rates on safe assets will return, once the current inflationary shock is over.

The frequency and intensity with which (relative) deglobalization, geopolitical events, and climate change bring new shocks will determine whether the 2021/2022 reconfiguration of demand-supply interaction will persist. Or whether U.S. and Europe return to the path on which a mismatch between wealth and creation of new assets tends to lead interest rates again to low levels—as argued by Canuto (2021a), a view closer to Blanchard’s. Regardless of that, events in 2021 and 2022 have already triggered other policy regime changes.

THE END OF BOUNDLESS LIQUIDITY FROM CENTRAL BANKS

The inflation resulting from the change in the match between supply and demand explains a second profound change: the end of the era of unlimited liquidity provided by central banks. For years, central banks in major economies responded to virtually any sign of economic weakness or financial market volatility by putting more money in. During the pandemic, central-bank balance sheets made huge additional jumps relative to the trend since the global financial crisis (Figure 5). 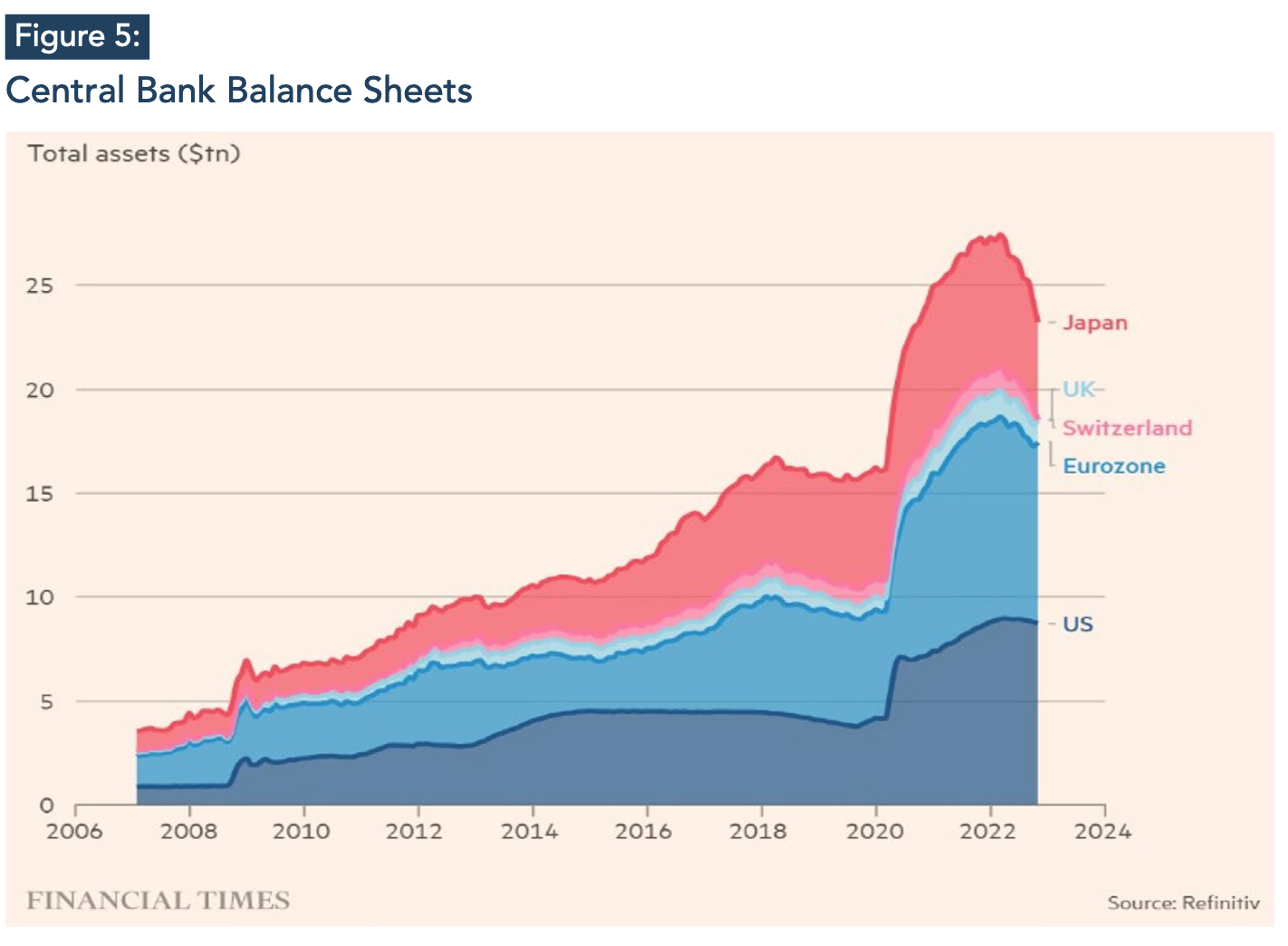 But as central banks extended what were supposed to be time-limited interventions, some collateral damage was inflicted. Liquidity-laden financial markets became dissociated from the real economy (Canuto, 2020). In addition, they became ‘spoiled’, starting to exhibit ‘tantrums’, with negative reactions, even to mere indications of reduction in central bank support (Canuto, 2022c).

It was like this in the U.S. ‘taper tantrum’ in 2013, when the chairman of the Fed at the time, Ben Bernanke, announced that the institution would start planning the end of quantitative easing, and ended up reversing this course six weeks later. It also occurred in the fourth quarter of 2018, when Jeremy Powell, then Fed chairman, had to make a very embarrassing about-turn from his mild ‘quantitative tightening’ because the markets got so choppy.

All that changed with rising inflation in the U.S. and Europe. The diagnosis of inflation as ‘transient’ gave way to promises of ‘quantitative tightening’ in earnest, and of raised interest rates. Strictly speaking, the Fed continued to inject liquidity into the economy until March 2022, gradually shrinking its balance sheet starting in June.

It also finally began to raise policy rates modestly, then switched to a series of steeper hikes, including a record four successive hikes of 0.75 percentage points between June and November 2022, and ending the year with another 0.50 percentage points. It should raise the base rate by 0.25 percentage points two or three more times in the first few months of 2023, and leave it there for a while. 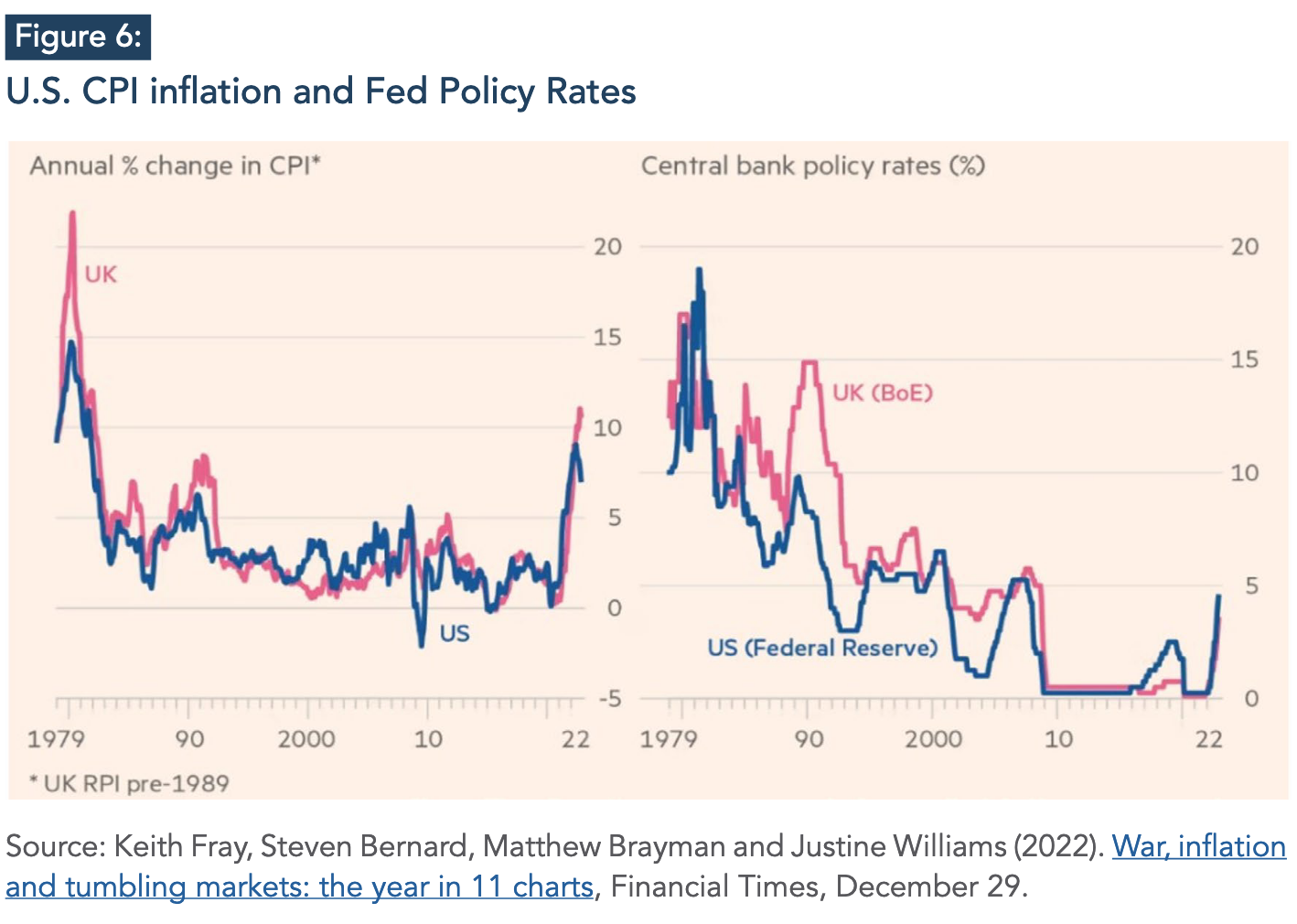 The two previous policy regime changes have led to a third: a looming fragility in financial markets. 2022 was a year of equity and fixed-income devaluation: the financial year ended with losses of more than $30 trillion in equities and fixed-income bonds. Figure 7 shows how negative a year 2022 was for investors, in both stocks and bonds. The macroeconomic slowdown in 2023 is likely to also lead to lower overall asset yields, especially from stocks. 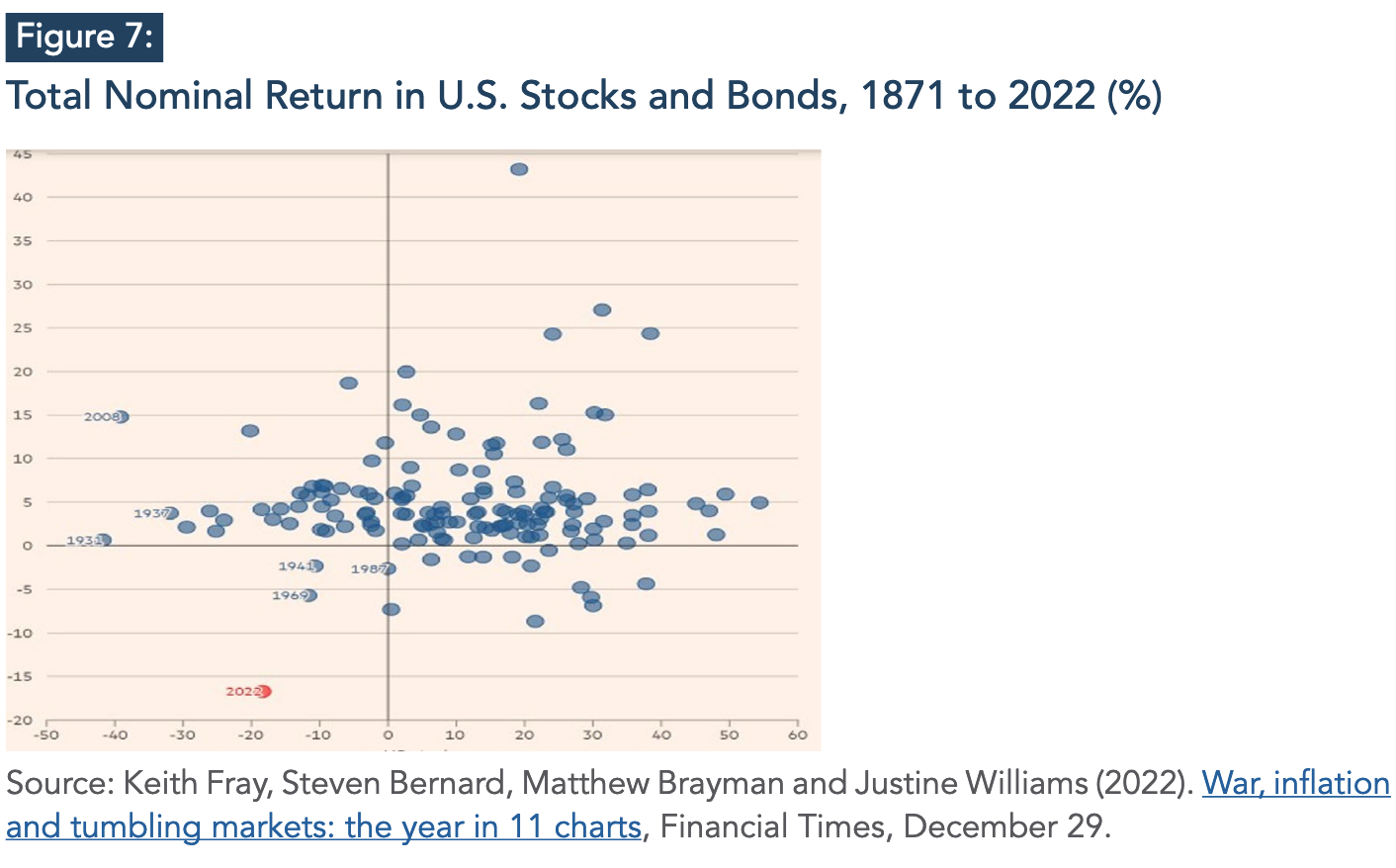 Corporate debt increased in the years of low interest rates and abundant liquidity. Although analysts suggest that there is no generalized vulnerability in terms of mismatches of rates between assets and liabilities, it is recognized that there are multiple points at which some sudden disappearance of liquidity could lead to dramatic adjustments and insolvencies.

OECD (2022) highlighted major financial market developments, spillovers to credit risk, and rising vulnerabilities in several market segments, as a reflection of tighter monetary conditions, slower global growth, higher inflation, and geopolitical tensions. Let us focus here on a peculiar source of risks that has acquired prominence in the recent past.

The 2008 financial crisis was ultimately about the banking system and about the payments and settlement system. High capital requirements were established subsequently, limiting the types of activities that banks could participate in, and the banking system was de-risked. On the other hand, the newly prominent intermediaries are not likely to maintain strong resilience against sudden and sharp changes in the cost of borrowing, or access to finance.

The post-2008 crisis reforms, while targeted at reinforcing financial stability, may have, in some areas, simply replaced counterparty risk with liquidity risk. Shocks on asset prices may be propagated by intermediaries being obliged to shrink their holdings, exacerbating those shocks via transmission and contagion.

The displacement of counterparty risk into liquidity risk appears in several forms. For instance:

There are also non-transparent off-balance sheet risks in both the bank and non-bank financial sectors. The BIS Quarterly Review of December also contained a chapter by Claudio Borio, Robert N McCauley, and Patrick McGuire on “huge, missing and growing” dollar debt in foreign exchange swaps, forwards, and currency swaps.

The fragility of the financial system has implications for the work of central banks. Instead of facing only their basic dilemma—reducing inflation, or maintaining economic growth and employment—they now face a trilemma: reducing inflation, maintaining growth and jobs, or guaranteeing financial stability. As growth slows, monetary tightening is prolonged, and illiquidity bouts exacerbate financial fragility, central banks might be forced to try to reconcile their quantitative tightening and interest rate hikes with interventions to provide liquidity at key points of the system. Some sort of combination of QT and focused quantitative easing ...

---------------
Whatever the duration of the new policy regime may be, we are no longer in Kansas with respect to supply versus demand, monetary policy, and financial stability.